Bish's Review Space Above and Beyond Episode 13: Level Of Necessity

"You act without even thinking about it, because you have no other choice, because it matters, because you've reached your level of necessity" - Matt Burke 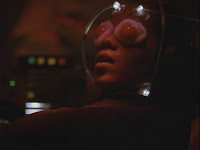 Of Necessity was written by Matt Kiene and Joe Reinkemeyer and directed by Thomas J. Wright. Genre fans might enjoy knowing that Kiene and Reinkemeyer were both story editors for the entire first season of Buffy The Vampire Slayer and had writing credits on the Buffy episodes, The Pack and Inca Mummy Girl.

While on a mission in the hellish tunnels of the planet Daedalus, Damphouse has a premonition that the 46th squadron are walking into a trap. When all but one are killed Matt Burke, a colonel from the Psi-Ops division, becomes interested in her and leads her through a series of tests, culminating in him observing her on a mission back to Daedalus and a fateful raid on a Chig ammunition dump. Vanessa's psychic visions happen again, predicting the death of one of the team. As tensions in the tunnels run high the Chigs attack and Burke is fatally wounded. The 58th escape but Vanessa is left wondering if her abilities are even real and if so, are they a gift, or a curse.

The Good
The basic idea of psionic soldiering is worth exploring in this kind of show. Damphouse could do with an arc beyond being "the nice one" in the squadron and this could have unfolded into something interesting.

Richard Kind, who plays Matt Burke, puts in an excellent performance as the slightly crazed colonel. He manages to go very naturally from annoying to sympathetic as some 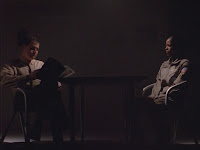 of the reasons behind his obsession with psychic visions come to the fore. He is a man who has been cast down from the position he used to enjoy and desperately needs something to believe in - there are definite shades of Wong and Morgan's other big show - The X-Files - in this character arc.

The tunnels of Daedalus are very well designed and atmospheric. I do not generally suffer from claustrophobia and certainly not while watching characters on TV but the sheer thought of having to crawl through those booby-trapped shafts for hours on end actually made me feel quite bad. Plus, it's another different sort of warfare for the 58th to showcase and put me in mind of the sappers in the First World War who used to tunnel under enemy trenches and blow them up.

The Bad
Unfortunately, while the premise had some promise, Level Of Necessity fails to deliver the essential ingredient - interest. The plot summary sounds like a decent idea and there are some genuinely well-done scenes but the whole thing is too slow and too vague. Damphouse is a likeable character and I can see why the writers felt the need to give her something to do but they dropped the ball here.

For all the fancy speeches about seeing time as a circle, all Damphouse's powers really boil down to is knowing for certain that someone in the vicinity will die soon. That is a maddening ability that, as is actually stated in the episode, isn't any use in a combat situation as it only serves to put everyone else on edge and for Damphouse to second-guess her every thought.

Irritatingly, Kiene and Reinkemeyer make her situation too unambiguous to believably dismiss as luck or "a trick of the light". It is clear, in this episode at least, that when Damphouse has a vision, it will come true, which really should pay off in subsequent episodes but will not. Of course, Space only ran one season and they could have revisited Psi-Ops in a hypothetical Season 2, but that's purely speculation. Damphouse's last speech in the episode is the traditional serenity (not that one) prayer:

which could serve as an explanation for why this ability doesn't really come up again, but only if you were really generous and accepted that Damphouse's will is iron enough to stop her trying to warn her f

riends when they are about to die, which, from everything we know about her, it definitely is not. It is much more likely that the writers found this idea unworkable and quietly dropped it, rendering this episode pointless as well as boring. A pointless episode that had something to say, or some exciting action might have been salvageable, and a less good episode that was a major turning point in the arc of the show might have had redeeming features but unfortunately Level Of Necessity is neither.

There is also a "token sceptic" character, Luben, who joins the 58th as the only survivor from the 46th and believes that Damphouse either got lucky in delaying the 58th from entering the tunnel or didn't act fast enough to warn the 46th. It is always annoying when shows feel the need to add an external character to bring up a valid point of view because, as happens here, it tends to be done with the subtlety of a sledge-hammer and, because he's not one of the gang, the audience is automatically predisposed to disagree with him. If you know your science ficiton you'll probably remember that Star Trek did this all the time, because the characters as written always had to be basically on the same page. Space isn't that kind of show, however, and better writing could have avoided this cliche.

Less important, but worthy of mention: the effects of the auras that Damphouse sees around doomed individuals are really quite ropey, which harms verisimilitude much more than a poor special effect usually does, because we're supposed to be in the mind of the character, and she wouldn't see in dodgy green-screen.

Future History
A very nice one here when Wang explains how an early attempt at gathering intelligence by psychic vision resulted in a disaster for the United States in the mountains of Karakoram in the 2050s. This is especially fun because it calls back to the fifth episode, Ray Butts where this engagement is briefly mentioned.

Past History
I don't think there was anything this week.

Ultimately, just not a very good episode, and a big disappointment after the triumphs of the previous two and for fans of Damphouse in general.