Moving back to the "present" of the comics, 1987, we have Grudge Match! Part 1 written by Simon Furman, pencilled by Jeff Anderson, inked by Stephen Baskerville, coloured by Steve White and lettered by Anne Halfacree.

The cover, also by Jeff Anderson, is pretty good stuff. The speech balloon detracts, as always, but the twin flying figures of Swoop and Divebomb are well-realised and dynamically presented. Perhaps a bit more effort could have been made for the background rather than just blue sky, but at least it doesn't distract from the Transformers.

A few panels of typical circus stuff to set up the scene and then a massive splash page of Headstrong smashing his way through the big top! The way the ringmaster's dialogue builds up to this piece of action is a nice bit of cute wordplay from Furman:

The scene cuts to a boy and his father at the rifle shooting game where Furman gets to have another play around with dialogue as the boy complains he wants to see "the big cats" only to have Razorclaw and Rampage appear and start wrecking things.

The Predacons cause chaos and panic as they romp around the circus, destroying with no apparent goal. It becomes apparent that Divebomb is missing the carnage. We find that he is perched, in bird mode, on one of the rollercoasters and is a pensive mood. He cannot see the point of the Predacons terrorising such obviously inferior beings as humans, especially after their twin victories over Optimus Prime and Megatron.

He thinks back to the good days on Cybertron where he was always in the action as a loner and took out Autobots single-handed. He wants to leave Earth but feels that he cannot because that would leave his colleagues unable to form Predaking (unusually selfless for a Decepticon).

Then Divebomb admits to himself that the real source of his angst is wondering what happened to the original Divebomb. These words are overlaid over a scene-change panel of Swoop so we know what he's talking about.

Swoop has seen the Predacons deprivations on TV and has recognised Divebomb as the Decepticon who stole his name. Sludge points out that it can't be him, as Swoop always maintained that he had killed him, but Swoop brushes this off by saying that he couldn't be as dead as he had thought and announces his attention to finish it once and for all.

Sludge asks what the point is, which is kind of an unusual stance for a Dinobot to take - in fact, it's rather unusual that they are watching the Decepticons on TV rather than going out to confront them, but although you wouldn't really know it from recent UK issues, this is the period where Grimlock was being a terrible Autobot leader, so perhaps he had something trivial to worry about that kept them in the base.

Swoop stops for a moment at that, pausing to reflect upon his lies, his shame. It turns out that he did not exactly tell the whole truth about his last clash with Divebomb but he does not divulge any details, and merely tells Sludge: "He's still using my name." 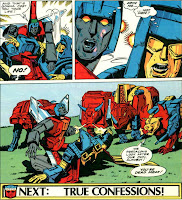 Later, Divebomb is flying around, bored when an explosion blasts him from his reverie. Swoop has arrived!

The two clash in the air and trade insults as well as blows. Divebomb knows exactly how to hurt Swoop - asking him if he ever told his fellow Autobots what happened the last time they fought - that someone, who remains nameless in this issue but is now dead, saved Swoop from Divebomb's wrath.

The Predacon smashes the Dinobot into the ground and lands. Swoop manages to transform to robot mode and they tustle before the Predacons show up and face Swoop down, disappointing Divebomb, who wanted the kill all to himself. Cliffhanger!
This story is one of the very few that I can have some genuine nostalgia about as I owned a copy of the 1992 Summer Special it was reprinted in when I was very young. I remember reading and rereading it and really wish I still had the issue around. At the time I was not getting the comic regularly, had only seen a few episodes of the cartoon and mostly knew of the toys from G2 and late G1 European releases, so there were a lot of gaps in my knowledge. I knew the Dinobots, and owned reissues (although did not realise this was the case) of Grimlock and Snarl but I had no knowledge of the Predacons or the continuity of the comic. Despite all that, I loved this story and I think the themes are strong enough that it works quite well without masses of back story to make it relevant:
The fact that the Predacons clash with he Dinobots (ok, next issue, but that seems fairly inevitable at this point), made perfect sense to my young mind and still does as they could almost be seen as mirror equivalents in the two factions and the guilty team-member who has secrets from the others and must go out to prove himself is a universal theme in this kind of fiction.
I also approve of the references to their twin defeats of Optimus Prime and Megatron. As we've talked about in previous reviews, this was something of a continuity nightmare when the US and UK comics had to be reconciled and, although Furman just about managed to explain it away with some tricky writing, it still feels like a structural mess to

use the Predacons twice in almost exactly the same way in two very close stories. With this is mind it might have been easier to ignore this for the purpose of going forward. It's not as though Divebomb had to mention these events so I have to give Furman points for acknowledging that, clumsy as it was, it happened and even plays a part in the Predacons' character development going forward. In fact, if you hadn't actually experienced the awkwardness of reading these storylines, this words as brilliant backstory for these characters, and no doubt as a child I found the fact that they could defeat both faction leaders to be very exciting!


Furman's script is flowing and has a few good flourishes. He has long been a fan of the last sentence in a previous panel or scene commenting on the action in the next, usually in an ironic way and he exercises this deftly here. Perhaps with a few more pages it wouldn't have been necessary to use the slightly clumsy medium of thought bubbles to demonstrate Swoop and Divebomb's angst but this was de rigeur for comics of the time so doesn't upset me overmuch.


In the last couple of weeks I have talked about how having the future stories to break up the action expands the universe and gives us more variety but the same can almost be said of stories like this. The comic, by this point, had so many characters and settings that you could become invested in a story like this for a few weeks without breaking the flow of the main narrative. It was very much what is often referred to as a "team book" but there was a big enough team to focus on a number of different characters with their own goals and concerns.
The actual issue is very straightforward, with most of the action to come in the follow-up. Of course, it is designed to work as a sequel to the 1988 Annual story What's In A Name? but it's not hard to get up to speed if you haven't read that one. It might even work better the other way around, because Grudge Match! could be more powerful if you don't know exactly what Swoop's secret is.
Anderson'

s artwork is excellent from the first splash panel. He has drawn a lot of Transformers by this point and it shows. The opening splash, as I already mentioned, is very well executed and memorable (although it probably benefits in my mind from being an indelible image of my childhood). Similarly, although it is only a single panel, Anderson's rendering of Predaking, striding menacingly among ruined buildings, is one of my favourite images of a generally spectacular looking character.
Baskerville is a great inker and his work, combined with White's colours really gives this issue some depth. The panels I have picked here, of Divebomb flying over the landscape at night are really beautiful and detailed for two small frames but really, this attention to detail shows on every page.


A really enjoyable issue, with good action and characterisation of some slightly less-used characters. Look for a review of Part 2 next week!
Posted by Bishbot at 10:25 AM

I have fond memories of finding the original issue in a box of old comics at school (but I'll save people some of the wider horror stories about what happened to many comics in those days) and enjoying it at a time when I felt the regular comic was stalling due to Earthforce and the G.I.Joe crossover. Then a couple of years later the special came along.

The regular comic had finished at the very beginning of 1992 and so it was a complete shock to me to see the special on sale one May weekend. I remember buying reading it in the back of a very hot car whilst my parents walked around garden centres. To finally find out how the story ended ended was incredible at a time when I genuinely doubted the comic stories would ever see the light of day again and it seemed as though Transformers would have a nice little reprint run. It was also nice to get a complete story after most of the later Collected Comics had a tendency to start larger epics and fail to finish them.

Storywise this issue is generally good but I think it handles the backstory a little clumsily - the truth had already seen print in the annual so if one had already read that there was no mystery but if they hadn't it was alienating for the readership.

I have to disagree that it was alienating for the readership. I actually think this story works better if you don't know exactly what is going on with Swoop and Divebomb.

It still works fine if you did happen to have read the annual, but I don't think it's in any way essential.