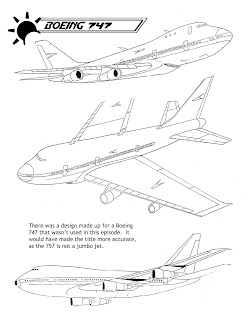 As promised, this week's Ark Addendum fetures some more airplanes.  From the same episode, we have an unused model for a Boeing 747.  Since this is a jumbo jet proper, it would have made the title (Kidnapping!? The Targeted Jumbo Jet) more accurate.  I wonder if they switched because of how high up the cockpit is in this aircraft, which would have made the action sequence when Cab and Shuta save the pilot awkward.  Probably I'm overthinking it though.  Regardless, they're rather nice designs.  Of course, after the future tech of 2006/2010, this seems like a step backwards.  However, Masterforce takes place probably somewhere around 2020 or so, and odds are good that, in the real world, 747s will still be in our skies in eight years.

Next week I'll finish it out with the crew from this episode.  Then, maybe some G1 stuff.

I hope Almanac sales are good because I think this is an area of fandom which at least here in the west is sorely lacking, not to mention that the service this renders to fans is invaluable. Thanks again for all your hard work!