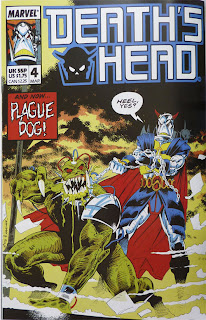 The cover is by Bryan Hitch and Mark Farmer, the art team from Issue 1. A green-skinned, apelike creature with sharp claws, big teeth and cybernetic implants is snarling in the foreground. Behind, Death’s Head is holding his chain like a leash, “Heel, yes?”.

The caption tells us, “And now… Plaguedog!” with some nice creepy lettering. It’s a powerful, somewhat comical, image and the two characters are depicted really well. The background is nonspecific, but the smoke and dust add nice depth. A great cover that, unfortunately, promises more than it can deliver.

The story begins at a Los Angeles racetrack: a shadowy employer named Dead Cert it contracting Death’s Head to flush out and kill ‘The Mutt’ (not too hard to guess what this is). Meanwhile Spratt is being shown into their new office by the sinister undertaker (conveniently named ‘The Undertaker’) from the previous issue’s epilogue. Hearing that Spratt’s partner will arrive later, The Undertaker gloats that, “He’ll do for dessert!”

Not hearing this, Spratt steps into the darkened office. We’re given a title splash of him saying what fun the new office will be (he’s easily pleased – it looks pretty bare and dismal), while a slimy Plaguedog lurks above him.

In an uptown skyscraper, a birthday party is underway for Jules ‘Kneecap’ Venici. We learn he is a lieutenant of The Undertaker (a criminal boss, and rival to Dead Cert). A huge cake is delivered and, assuming it contains an assassin, Venici orders his gunmen to open fire. A shower of icing proves him wrong and, wiping his face, he sits down to be served a fresh slice of cake by a waiter. 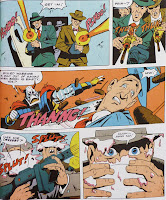 The cake explodes, killing Venici, and the waiter is revealed to be Death’s Head in disguise. Chased by henchmen, the mechanoid retrieves a pistol hidden under a serving platter (having first grabbed a platter of roast duck) and opens fire.

Back in the darkened office, Spratt falls over a table and accidently avoids Plaguedog’s first swipe. The creature drops to the floor with a ‘slutch!’ and Spratt turns to face the full horror bearing down on him. He manages to fend off Plaguedog with a desk lamp, before them both tumble out of the office and crash through the floorboards.

At the uptown shoot-out, Death’s Head’s thought bubbles provide the necessary exposition: his mission is to kill Plaguedog. His plan to bring the creature out of hiding is by threatening The Undertaker’s lieutenants. Having killed one, he expects Plaguedog to be unleashed to protect the next in succession. Running out of ammunition, he flings plates, desserts and kebabs at his opponents, before using a table to sweep the remaining goons off the balcony (engaging his boot jets to save himself).

Emerging from the debris, Spratt boosts a hovercar to escape Plaguedog. The creature grabs onto the rear and Spratt reverses, slamming him into a wall. He then throws a match onto the leaking fuel, destroying Plaguedog in a huge explosion. 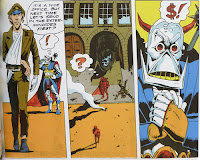 Upstairs, the telephone rings as The Undertaker tries to activate his now-deceased attack animal. The reason for doing so becomes clear in the next panel: Death’s Head has wiped out another lieutenant, and is disappointed that this has not brought out his quarry. He pokes his latest victim with his boot, “Guess he didn’t think you were worth it, eh?”

Returning to the offices, he finds a wrecked hovercar, an incinerated Plaguedog and an injured Spratt, who is too beat to explain matters. In three panels Death’s Head’s thoughts quickly spool through various punctuation: exclamation point, question mark, and finally dollar sign as he greedily rubs his hands together.

As an epilogue, The Undertaker is ranting about the loss of face he has suffered, and employing a new bounty hunter to wreak vengeance. An imposing character with a cannon for a right arm accepts, “They don’t call me Big Shot for nothing!”

As I mentioned with the cover, this issue doesn’t really deliver for me. I’m that afraid Sullivan’s art, while fine for the most part, really falls down with his depiction of Plaguedog. Hitch’s portrayal shows a ferocious artificially-engineered attack beast, Sullivan’s Plaguedog is little more than a big naked orc with a few wires attached.

It’s not even clear what Plaguedog is: in the title splash page he is mainly composed of slime (which may be a stylized version, or some amorphous hibernation mode) and seems to dwell on the ceiling like a spider. But when we actually see him, he is solid and brutish. Also, for an ‘ultimate killing machine’, he really struggles to get the better of an unarmed Spratt. 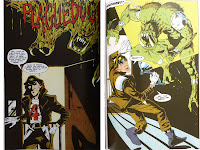 Aside from the main antagonist, Sullivan’s artwork is perfectly acceptable (that may sound like faint praise, but Bryan Hitch and Geoff Senior are tough acts to follow). Death’s Head’s action scenes have plenty of punch and the rendering of The Undertaker and Big Shot are both very good. It’s a shame that the two full-page spreads are so similar: Spratt in a darkened office with Plaguedog bearing down on him – the second one should have the impact, but it’s weakened by the first.

Spratt’s battle with Plaguedog takes up most space – probably too much, especially since we’ve had our ‘get to know the sidekick’ tale last issue. This relegates Death’s Head to a supporting role, and while it is fun watching him casually plough through the mobsters, the issue feels padded. For the first time in a usually plot-thick series, it seems Furman had too many pages and not enough story.

Another point about his opponents it that Venici and his crew are fairly cardboard cut-out mobsters (sharp-suited henchmen, spats footwear and “atsa matta for you!” accent). Considering we’ve already visited the genre in Issue 1, it feels repetitive. There’s also no trace of the exotic people and places from last issue – maybe ‘uptown’ is more homogenous (and has a retro fashion for the 1920s), but it doesn’t feel like the 8162 we were introduced to.

The pay-off is more enticing (though we don’t get resolution for a few issues): a showdown with Death’s Head is set in motion and Big Shot is a solid character design (and becomes a really fun antagonist). The idea of Death’s Head getting caught between two rival crimelords is a good one – both Dead Cert and The Undertaker seem promising and their feud over the next few issues is the closest thing the series gets to a story arc.

A final point on the storytelling: though it’s played for a joke, it’s still a big coincidence to swallow that Spratt should be randomly hunted by the very creature Death’s Head has been hired to kill. It’s not even clear why The Undertaker would go to the trouble of setting up victims – unless he has some serial killer compulsion – when he can just activate Plaguedog to feed on one of his enemies.

And of course the biggest plot hole of the story: that Death’s Head in a tuxedo and big blond wig could pass for an average waiter (I do love his disguises!).

Next week: Double-cross reigns as Death’s Head tries his hand at marriage guidance in “Do Not Forsake Me Oh My Darling!”

I remember being unimpressed with this issue as well, though there were some delightful scenes like the aforementioned cake scene.