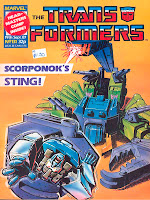 t Part 2 was written by Simon Furman, drawn by Will Simpson, inked by Tim Perkins, lettered by Anne Halfacree and newcomer Nick Abadzis took over colouring.

The cover is by Lee Sullivan and depicts a very dramatic and relatively toy and show accurate Scorponok with Highbrow as his helpless prisoner. Perhaps the background could have used some detail but I really enjoy the energy in this image and the terror of Scorponok's enormous beast mode. The painted colouring is really beautiful as well, and is appreciated given that unlike on the earlier issues, this was no longer a guarantee.

The scale of the threat posed by Scorponok is illustrated in an excellent opening splash panel where his claw is almost the size of four Autobots put together! He proceeds to toss the Autobot Headmasters about while explaining the trap they have walked into.

The other Decepticons are blocking the exit so Hardhead uses his sidearm to destroy the cables keeping the Targetmasters imprisoned. This gives them the momentum they need to free the Nebulons that form their weapons, Peacemaker, Pinpointer and Spoilsport and even the odds!

Meanwhile, Scorponok has beat a tactical retreat with Highbrow clasped helplessly in

his claw. He mocks the Autobot's inability to fight back while we get a glimpse of Highbrow's internal struggle. He is desperate to fight the Decepticon but Gort is terrified and won't respond.

Back at the fortress the Autobots are getting the upper hand but Chromedome realises that Highbrow is missing and sets off in pursuit.

Scorponok transforms to his towering robot mode and talks at Highbrow about how this situation has helped him understand the bonding process better, and how he now realises the importance of compatibility in the minds involved. He is about to slay Gort but Chromedome appears at the last minute and fires on the Decepticon, who responds by lobbing a huge boulder.

Chromedome proceeds to give the lie to Scorponok's assertion, using his enhanced Headmaster skills to evade the giant Decepticon at every turn and hit back, while giving a lecture about how the differences in the two minds actually create a strong middle-ground.

Hearing this pep-talk, Highbrow rebonds with Gort and fires on Scorponok, sending him fleeing. Highbrow thanks Chromedome and reitterates what being a Headmaster is all about: celebrating the positive aspects of disparate personalities and using them as force for truth and justice. (or evil, in the case of the Decepticon Headmasters, but he doesn't say that).

A fun conclusion to the story that goes some way to explaining just why the Headmaster process was necessary. We get a lot of explanations in other versions of the story that essentially boil down to "working as one mind makes you more powerful" but it's never really shown. 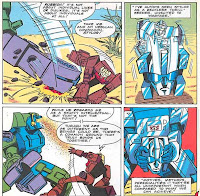 sters are generally depicted as simply having more powerful guns, which works thematically, if not very plausibly. However, to really show why you would want to willingly share your mind with another being the writer needs to go a bit further, and Chromedome's acrobatic takedown of Scorponok goes some way to demonstrate this. Of course, Scorponok is a Headmaster too, but perhaps him and Zarak are too similar? (for the two of you reading this who don't already know who Zarak is, he's Scorponok's Nebulan companion). I have always read this as two minds working in tandem to spot all the possible combat angles and options, more than one individual warrior would be able to process. This is certainly more plausible than the cartoon, which had the Nebulans explicitly pushing buttons and moving levers to get the Autobots to do things.

Eagle-eyed continuity hounds would have spotted Cyclonus and Scourge among the Decepticons on Nebulos. This doesn't actually matter for this story, as there is no indication of when it is supposed to take place. However, the US Headmasters miniseries (currently running as backup to this story, don't forget) explicitly took place in the '80s, yet these characters could not be left out as Hasbro had reissued them as Targetmasters. Furman went on to explain this in

Legacy Of Unicron (review coming soon) but it would have seemed pretty bizarre at the time of release.

Another issue of decent art from Will Simpson. Nothing stands out overmuch but the action flows and the characters are on model. The colouring is on a par with the previous issue, and Abadzis repeats the same bizarre error of colouring Crosshairs like Sureshot and vice versa that White did, which leads me to believe there must have been some kind of behind the scenes snafu misinforming the two of them.

An enjoyable two-issue battle but nothing Nebulos-shattering. I would have liked much more examination of the Headmaster process but still enjoyed rereading this one. It was collected in the Titan collection called Transformers: Time Wars (Transformers (Titan Books Paperback))

(available for order) which is worth having, but not really for this story.
Posted by Bishbot at 9:47 AM

Cyclonus and Scourge's appearance in the story was a perennial issue on the letters page for the next few months (readers at the time seemingly took it for granted events were set in the present unless otherwise stated), with a number of solutions proposed. One interesting one suggested that the original Cyclonus and Scourge had died and Unicron based his creations on them (citing a statue that looks like Scourge in the Movie) - it's not that dissimilar to the original plan for the Movie.

Overall whilst this is a reasonable tale in its own right, it's a real continuity mess in a series that generally goes out of its way to make everything fit together. Almost certainly this is down to Hasbro UK once again ordering a new set of toys be advertised before the continuity was ready for them.

I was struck by how Bob Budiansky refrained from using Cyclonus and Scourge at all after his Headmasters mini-series (and barely used them in it), and would be curious to know whether he dropped them as a favour to Simon Furman so he could have them for Wrecking Havoc, Time Wars, etc.

All the more striking since their Autobot counterparts, Hot Rod, Kup and Blurr, had quite prominent roles both in the US mini-series and after coming to Earth.

Cheers Tim. It's always great to hear what the fans (well, kids, I guess) were talking about at the time. It would have been nice for Furman to have foreshadowed Scourge and Cyclonus's time jump in some way, but at least nothing actually CONTRADICTS what ends up happening.

Martin: I suspect that Budiansky was working under the assumption that Transformers: The Movie was canon in the future of the comic book and as it is clearly the origin story for Scourge and Cylonus he probably wanted to sweep the continuity problems under the carpet after being forced to introduce them to sell Targetmaster toys.

I've never assumed that Budiansky was taking the movie as canon. Why would he? He never took the cartoon as canon. We know (now) why Furman used the movie, but I see no reason (Cyclonus and Scourge's sudden absence notwithstanding) to assume Budiansky had the same opinion. Seems much more likely to me that he simply didn't find them interesting enough to follow up on. Just like so many other characters introduced in Headmasters (to say nothing of elsewhere in the series).

Bob (I assume it was him) did write up the Movie characters in the Transformers Universe mini-series, but then again he didn't give them as detailed profiles as the other characters.

Poor Arcee doesn't even have any abilities - only weaknesses!

Hm, nor does Arblus. But Kranix can fly at 1000 miles per second!

Not Bob's most careful work.

I'm not actually sure that was Bob. After all, Transformers Universe entries didn't contain new text, they contained the bios that Bob had already written. We know that the Movie guys were, mostly, new toys. Many of the profiles read more like design notes. I wonder if they didn't grab whatever text was available and stick it in.

I just figured that although Budiansky didn't write the comic adaptation of the movie, it was a comic published by Marvel in the Transformers line, so it seems reasonable to assume it's canon, no?

(For Bob, I mean - obviously that's not the way it turned out)

I think i was about 8 when the headmasters were introduced. Even then they struck me as pretty silly idea,and i could spot US strips that were boring toy ads-uncle bob didnt have simon furman's flair for integrating new toys! I hardly bothered reading the US mini-series and I think I understood that the movie toys were just getting a re-release with new gimmicks. I wasnt thinking about continuity. The 'scourge statue' theory is creative though,hats off to whatever kid wrote that letter! The scourge/cyclonus targetmasters were moved offstage by time wars werent they?