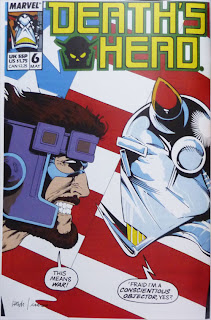 The cover is another by Bryan Hitch and Mark Farmer, a head-to-head between Death’s Head and the grimacing Colonel Mayhem from last issue’s teaser. They face off against the backdrop of the stars-and-stripes: “This means War!”, “’Fraid I’m a conscientious objector, yes?” It’s a nice looking cover, although it does spoil the punchline at the end of the issue, so they really ought to have thought of an alternative gag.

We begin in a military facility in the Arizona desert, the splash page being the formidable Mayhem charging forward, bayonet-first and roaring. The caption reads that “Whoever once wrote that ‘soldiers disguise fair nature with hard favour’d rage’ clearly had little real understanding of the military mind!”. This is accompanied by a caption identifying the ‘whoever’ as Shakespeare and calling the writer a philistine. It may just have been Furman shooting down his own statement, but I’d like to think was Furman and Starkings having some fun here. 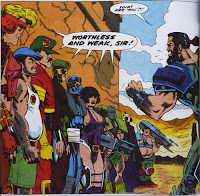 Mayhem’s bayonet imbeds into a wall, an inch away from one of his soldiers. He is playing the role of relentless drill-instructor, bawling at his troop for being ‘worthless and weak’. We see the full ‘Sudden Impact’ team, a very motely cross between paramilitaries and comic superheroes. A General arrives and briefs Mayhem on their next covert mission, as a number of more-conventional soldiers start to harass Sudden Impact. One word from their colonel, and the team springs into action, effortlessly defeating the soldiers. Mayhem declares them ready for action.

In a compound outside Los Angeles, we see the target of the mission: a man named Gowse is being held the protective custody of Marshal Vek and his armed police. Gowse is a key witness against a politician named Carson, for an enquiry held by Senator Letterman. It was Letterman that hired Death’s Head, who is also present to guard the witness. Vek is unimpressed with the bounty hunter, who returns the favour by comparing his own morality to a policeman who is dictated to by politicians.

Their argument is interrupted by the attack of Sudden Impact. Despite Vek’s confidence, we are shown scenes of the paramilitaries overwhelming the police, “not so much a battle … as a slaughter!” (I’m sure I’ve read that enough times for it to qualify as a Furmanism). The witness panics, as Death’s Head calmly breaks out the chess set.

The scene jumps to the politician Carson’s office, where the aforementioned General is assuring Carson of his team’s success. Carson has apparently been loaning out the armed forces to other countries and needs to silence his ex-employee Gowse. He steps out of shadow to reveal a fixed grin and massive pompadour to declare, “This country needs me!”

Downtown L.A., in Death’s Head offices, Spratt is approaching a ringing phone with trepidation. His caution is justified when his hand is pecked by Keepsake’s old vulture, who is clearly vying for the role of sidekick. Spratt’s anger is lost to shock when the caller asks for “Death’s Head … my darling?”

Back at the compound, a humbled Vek staggers back, his forces defeated. Mid-chess game, Death’s Head responds to Vek’s accusations of idleness by claiming he was hired as a last line of defence. He gets his chance to show this as two members of Sudden Impact burst through the window.

They promptly get thrown back out of the window, which begins half a dozen pages of pure action. In ones and twos, Sudden Impact attack Death’s Head, who beats them without much problem, pausing only to quip an appropriate pun.

The fight is interrupted with a quick scene jump to Death’s Head’s employers: Senator Letterman and his police chief, who prove to be no more scrupulous than Carson. Letterman wants troops pulled from riot control to reinforce protection on his star witness, “as far as I’m concerned, once he’s voted, the average resettlement citizen is expendable!” 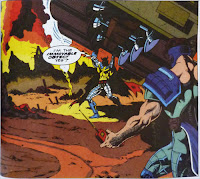 Back to the battle, Death’s Head’s finale is to stop a massive armoured vehicle from running him over. In a previously-unknown show of strength, he lifts the vehicle over his head and throws it at Mayhem. Though captured and with a blade to his throat, the colonel nonetheless claims victory. In Death’s Head’s haste to mow down the Sudden Impact team, he missed one team member called ‘Nitro’, whose talent is to explode spectacularly. The compound goes up in smoke, and so does the witness.

As usual, when his contract is nullified, Death’s Head ceases killing. He lets Mayhem live (despite Vek’s protests) and rejects his offer of recruitment. Killing for a cause, and being a paid a pittance, goes against everything he stands for. “Call me a conscientious objector, yes?”

The epilogue continues the storyline that began in Issue 4. Former employer Dead Cert has heard that his rival, The Undertaker, has employed a bounty hunter to kill Death’s Head and avenge the loss of Plaguedog. Dead Cert is engaging another bounty hunter, the diminutive Short Fuse, to thwart this plan – not by keeping him alive, but by killing Death’s Head first! 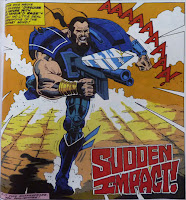 And so ends what was basically an issue-long brawl with Death’s Head and a team of expendables. If the last issue was homage to detective fiction, this one is certainly in the big-muscles / big-guns style that was fashionable at the time. It’s fun to read – but only as a change of pace, to see what Death’s Head can do when he’s truly off-the-leash. If every issue was like it, it would quickly become stale.

Sudden Impact are enjoyable for what they are: one-dimensional, colourful antagonists. Mayhem is a good leader and slightly more developed as a character. He seems to be genuinely patriotic, which is strange considering the obviously-corrupt nature of his missions. There is scope for a ‘mercenary vs soldier’ morality comparison with Death’s Head, much like with Dragon, though the character doesn't return to explore this.

As a story that exists purely to get the two sides fighting, the motives could have been made clearer. Both sides are rotten politicians, which could be the cynical point Furman’s is making, but it makes them indistinct. Even worse (and I’m assuming it’s an editing mistake), Lek refers to the ‘Minister’ (which is Carson’s title) as his employer, when he means Senator Letterman. Nothing terribly confusing, but the two asides add little enough anyway.

In fact, the narrative itself is so thin there is room, not only for the epilogue, but an additional aside to Spratt and the vulture – this is foreshadowing a point for the Death’s Head graphic novel, so is possibly introduced a little too early, especially as it is not touched upon for the next two issues.

Perhaps there is so little opportunity for story because the nature of the job puts Death’s Head on the defensive. He cannot hunt, ambush or investigate as he usually does – he is simply a hired gun, and so can only knock down the targets put in front of him. As I said, this is entertaining for an issue, but not a direction I’d want to see permanently.

Though he acquits himself well against his opponents, this particular case is a rare example of failure for Death’s Head. I like that Furman makes him fallible, and also sets up a scenario where the protagonist can succeed, and still lose (much better than the chronometer-excuse from Issue 2). It’s also a nice payoff for pedantic readers like me, who meticulously tick-off characters as they are removed from battle scenes.

Removing the characters makes for something of a bloodbath. It’s entirely in-keeping with the tone of the series, but still a little shocking that Death’s Head actually kills all the Sudden Impact team. While some could be explained away as comic-book concussions, others are quite clearly thrown from high windows, crushed under walls and hit with missiles. Their deaths are explicitly referred to by Mayhem, and it puts the title closer to the darker ‘2000AD’ style of comics, rather than the child-friendly Hasbro franchise titles. 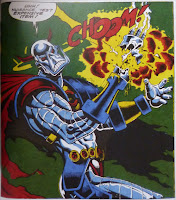 Story aside, this issue is all about the action and Liam Sharp was a good choice for this edition. His style seems to favour muscles and guns and he does a fine job on the explosions and gunshots. The designs for Sudden Impact are nice and memorable too (with some fairly eccentric choices for elite soldiers, even in 8162). I’m less keen on his rendering of Death’s Head himself: the metallic skin has gone from basic anatomy to bodybuilder levels of physique – even his neck seems elongated and over-developed. Of course, Sharp will get his chance to interpret the character in his own way, as he went on to create Death’s Head II.

There is also an unusual repetition in the one-page asides: both Carson and Dead Cert begin in shadow, then lean forward to reveal their full identify in the final frame. This makes sense with Dead Cert – who has been hidden in shadow previously, and is revealed as an anthropomorphic horse – but to do exactly the same with Carson, for no good reason, seems sloppy.

Next week: Random violence reigns as two bounty hunters compete to kill Death’s Head in “Shot By Both Sides”

"Carson" and "Letterman", eh? That got a chuckle out of me.

I believe next issue is done by Geoff, right?

DH: Body in Question's had the luxury of cosnsitently being pencilled by good artists,unlike the TF comic that ran alonside it. Why Marvel UK didn;t poach the like of Dave Gibbons onto their TF comic, which I believe was one of their bestsellers, counfounds me.

@Eugene Not quite - the next issue is pencilled by Bryan Hitch once again. But Geoff Senior does return for Issue 9 (and then some stunning work on the graphic novel).

The title did enjoy some great artists, although for such a short series, I think I would have preferred consistency for the whole run. Much as I love Geoff Senior’s work, my choice would have been Bryan Hitch and Mark Farmer (who only worked together on Issue 1, but did a lot more covers).