The Ark Addendum - Boeing 757 and The AllSpark Almanac returns! 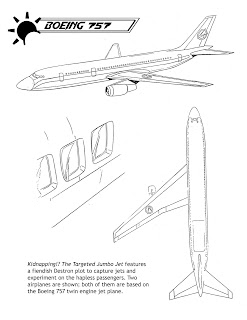 Good News, Everyone!  It's time for another Ark Addendum!  (Oh, by the way, thanks to Geewunling over at the TF Wiki, these are now much better organized over there.  Check out his hard work.)  Today's Addendum, and theme I'll explore for the next couple of weeks, is the Airplane models from the third episode of Masterforce, Kidnapping!? The Targeted Jumbo Jet.  The Destron baddies captured airplane-loads of people to turn them into the Destroids, a zombie-like force.  Creepy stuff!  This is the model for Mont Port Air Flight 308.


Oh, but I've got other, bigger news.  When I found out that the theme of this year's BotCon toys and comic would be Animated, I wasted no time pestering Fun Publications about the idea of another AllSpark Almanac.  After all, I've covered 3 seasons of the show, why not season 3.5?  As it turns out, FP and Hasbro were both enthusiastically behind the idea, so this November you can look forward to a bit more Almanac.  The AllSpark Almanac Addendum will be included as an extra in this year's Timelines comic, The Stunti-Con Job.  You'll get sixteen more pages covering the main characters introduced in season 3.5, plus some other neat extras.  And, who knows, if sales are strong enough, maybe I'll be able to find a venue for even more Almanac content.  Go out, get your local comicbook shop to order a copy or two, and enjoy rich, creamy, almanacky goodness!
Posted by Jimtron at 12:47 PM

Goddamn do I ever LOVE the Ark Addendum. So much great stuff. You do amazing work, man! I own The Ark and The Ark II, but not The Complete Ark. I was wondering... Have you ever found a character model for the ape-like "Primitive" mechanoid from Call Of The Primitives? I'm dying to find the model sheet for that thing. Thanks!

Call of the Primatives is towards the top of my wish list for episode-specific models. Sadly, I've never come across that model pack. Every once in a while I come across episode model packs, but it's rare. That one is chock full of interesting designs, so if I ever come across it you can bet I'll share it.