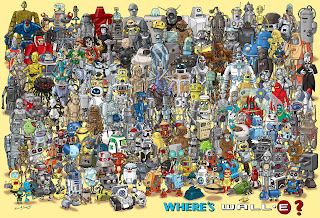 OK, this is awesome!  Hopewell Studios is running a contest on this great poster by Richard Sargent.  Whoever can get the most robots correct can win a copy of this artwork.  I had a lot of fun trying to guess as many as I can.  Give it a shot!
Posted by Jimtron at 10:06 AM

No Horde troopers from She-Ra? :(

Anyway, here's who I know: 90's and 60's B9 robot from Lost in Space, Terminator, Larry from Time Squad, Johnny-5, robo Bill and Ted, robot cop from THX 1138, robot from Metropolis, robot from Black hole, Jet Jaguar, C3-P0, Kryten from Red Dwarf, Gort from The Day Earth Stood Still, Robby the robot, Box from Logan's Run, Robot from Starchaser Legend Of Orin, Cylon from new and old Battlestar Galactica, robot from Judge Dredd, Dot Matrix from Spaceballs, ED-209 from Robocop, Wheelie and the retarded piece of *BLEEP* from ROTF, Battle droid from fake Star Wars, Bender from Futurama, Sonny from I, Robot, Hover robot from He-Man, Bicentennial Man, Tin-Man's a robot?, DALEKS-FROM-DR-WHO, Nomad from Star Trek TOS, Hector from Saturn-3, Robot from Atomic Betty, Calculon from Futurama, drill robot from Sonic cartoon, the robot from that short online movie, Cybermen from Dr Who, Rosie from The Jetsons, Marvin from The Hitchhiker's Guide to the Galaxy, M.O from Space Sentinels, the craptastic Robot Boy, Australian K9, Alpha from Power Rangers, R2D2, H.E.R.B.I.E from 70's Fantastic Four cartoon, Nono from Ulysses 31, new Marvin, Twiki from Buck Rodgers In The 25th Century, Tom Servo from MST3K, Robot dog from old Battlestar Galactica, K9 from Dr Who, The everannoying T-Bot from M.A.S.K, the good robot from Black Hole, Robots from Silent Running, Wall-E aaaand the robo-mouse and robo-cat from Chuck Jones era of Tom and Jerry.

The Richard Starkings that was the letterer of TF UK and TF Generation 2 at Marvel? The big man behind Comicraft? Didn't even know he could draw :)

In any case, it's a feast of recognition!

What, no Astro-boy? I always thought Yul Brenner's Gunslinger robot was far creepier then Arnold's Terminator.

EVE and M-O from WALL-E, Scooter from Go-Bots, Laputa Castle in the Sky Robot, Rodney Copperbottom from Robots (and his dog I think), Tachikoma of Ghost In The Shell, Big Guy of The Big Guy and Rusty the Boy Robot, Robot Knight from He-man, Haro of Gundam, XJ-9 of My Life as a Teenage Robot, Mark 13 from Hardware, Necron99 from Wizards, Bad Robot of Bad Robot Productions, QT-1 from Out of the Unknown TV show (The Prophet), Sentinel from The Matrix, Blinky from Bucky O'Hare, Robot from Heavy-Metal, Ro-Man Extension XJ-9 of Robot Monster, Weebo of Flubber, Dalek From Dr. Who, Planeta Bur , Mars Robot from Santa Claus Conquers the Martians!, Nomad from Star-Trek, One of the Junker robots from A.I., servent robot from Sleeper, Robot from Undersea Kingdom / Mysterious Dr. Satan AND Zombies Of the Stratosphere, GOG (say what? lol), Target Earth! robot, Syko from The Vanishing Shadow, Robot from Tobor the Great, Robot from Rocky 4, Jinx the Spacecamp robot, Vampire Over London robot, Bubo from Clash of the Titans, Robot from Zathura, Fix-It from *batteries not included, BEN from Treasure Planet, Adam Link from two generations of Outer Limits next to Sonny from I, Robot...

That's not all of them yet, it still leaves a few left over for the next person.

Oops, Hans, that was my subconscious intruding. Actually it's Richard Sargent. (Edited the post.)

You guys missed Noo-Noo from Teletubies, and the robot from Yo Gabba Gabba. I have no shame.

Lol!
Well, at least Starkings is a great letterer! :P

I recognise a whole lot of famous robots, but not nearly as much as you guys.... :)

What an amazingly unbelievable collection of obscure robots. Just thinking about the effort to come up with all of them makes my head spin. I can't believe they've even got Metal Mickey in there!!! I was impressed with all the geeky references in Transformers Animated, but this truely magnificent. I bow down to the legendary geeks who were able to collect such an ensemble into one image.

Hey, what an awesome poster! I love seeing all those robots together!