Death’s Head Review: Issue #5 – Do Not Forsake Me Oh My Darling! 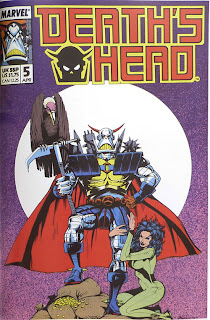 Same creative team for Issue 5 – writer Simon Furman, letterer Annie H, colourist Nick Abadzis and editor Richard Starkings – except for we get another one-off artist: John Higgins (who most notably coloured for Watchmen and Batman: The Killing Joke)

I couldn’t find out who drew the cover, but he was clearly a fan of Conan the Barbarian. In homage to the classic pose, Death’s Head stands on a heap of gold, adoring damsel clinging to his leg and brandishing a vulture perch instead of a battleaxe. It’s a fun idea, though perhaps they could have carried it further by copying the original’s soft lines and sepia colours. I like the fact that, rather than a heap of vanquished enemies, Death’s Head considers a pile of cash to be ‘best in life’. The vulture and woman relate to the story, although not in any logical sense. By her outfit, the woman must be Bahlia, although she is completely different in appearance and attitude, so lots of artistic licence is at work here.

A spacecraft flies above in the ruined wastes outside Los Angeles. Within is Keepsake, an unwashed salvage man; Bahlia, his attractive and inexplicably-devoted companion; and a bad-tempered vulture that reminds Keepsake of his ex-wife. These characters originally appeared in Doctor Who Magazine 140, also by Furman and Higgins, where Keepsake is made a reluctant hero by The Doctor and wins the heart of Bahlia. The previous story isn’t required reading for this one, but it’s a nice expansion of the universe.

Meanwhile, in his Plaguedog-ravaged office, Death’s Head is being employed to find Keepsake by his vampish ex-wife, Thea. Though initially dismissive, at her mention of gold bullion, Death’s Head suddenly becomes very interested in marriage guidance.

We learn that Keepsake and his old partner Colt discovered a shipment of sunken gold, and each took one-half of the treasure map as insurance. Thea and Keepsake planned to betray Colt, but Keepsake instead double-crossed his wife. Thea wants Death’s Head to recover her husband and both maps.

In a darkened bar, Keepsake and Bahlia are meeting with Colt, who has just been released from prison. The exchange of maps begins, until Colt pulls out a gun and his gang of hoods appear. Taking both maps, and Bahlia as hostage, Colt leaves Keepsake despondent. 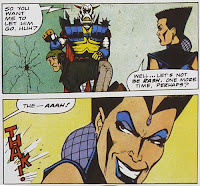 He is quickly collared by Death’s Head, who has been conducting some amusing enquires around the seedy bars of LA. The mechanoid begins his interrogation by slamming Keepsake face-first into the wall. Thea arrives, having avoided being spotted by Colt outside (using the classic technique of planting an enormous kiss on the nearest stranger) and confirms that Keepsake has indeed been betrayed. Even so, she does gleefully instruct Death’s Head to give her husband one last bash, for old times’sake.

Now allies, Death’s Head, Thea and Keepsake stake out Colt’s coastal salvage operation. After Death’s Head plays peacemaker to some husband-and-wife squabbling, they devise a plan to get past his goons and onto the boat where Colt is holding both the gold and his hostage.

Her skirt now several inches higher, Thea distracts Colt’s waterfront guards enough for Death’s Head to rip through the pier from below and despatch two of them. A swift knee from Thea takes care of the third and they get into a speedboat to intercept Colt.

Their boat is quickly sunk by Colt’s gunfire – Death’s Head is forced to hold Thea above the water under threat of not getting paid – but Keepsake’s aircraft comes to the rescue. Meanwhile Death’s Head jets into the sky, then crashes down through the deck of Colt’s boat.

As Colt frantically patches the hole, Bahlia and the gold are winched up to Keepsake. Underwater, Death’s Head decapitates Colt’s divers, then blasts upwards, smashing his way through the newly-patched hole in Colt’s boat to join the others.

In Keepsake’s craft, Thea is leaning out of the hatch and loudly gloating at the sinking Colt. Keepsake quietly offers Death’s Head half the gold if he pushes Thea out. Pausing only to register shock – and then admiration – at Keepsake’s greedy duplicity, Death’s Head heaves Thea out into the sea.

They land in safety and start to divide the loot, Death’s Head reasons that he was promised half the gold by Thea, and half by Keepsake – and so departs with everything, including the vulture. Keepsake is left with Bahlia. Thea is still in Colt’s sinking boat, complaining loudly.

In the one-page teaser for next week, a military team are in Equador, entrenched, outnumbered and under heavy fire. Their commander gets a message recalling them for an urgent mission. He responds that, despite the odds, they’re unstoppable and will be home by teatime. And so, the toughest comic character ever to use the term ‘teatime’ leaps forward, guns blazing.

Despite the Conan-style cover, this issue is not Death’s Head in warrior-barbarian mode (we’ll get that next week). He’s back to being an investigator, which is proving a really good format for his style of dry humour, mercenary sentiments and occasional brutality. As much as it needs good opponents, I’d say the Death’s Head title also works best when he has good clients. 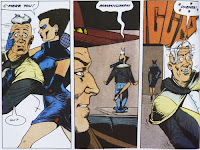 The story reads like a classic detective story: Death’s Head is the gumshoe, Thea the femme fatale, Keepsake the everyman grifter, Bahlia the pure-hearted dame and Colt the out-and-out villain. The ever-changing loyalties and double-crossing are entertaining, and it’s good to see Death’s Head in the mix with people even less scrupulous than himself.

Spratt is absent, but I didn’t even notice that on the first read. Indeed, the really fun relationship is between Death’s Head and his nagging employer, Thea. Resourceful and acidic, I think she would have made a much better foil for the mechanoid than the hero-worshipping Spratt.

Though this was his only work for the series, Higgins does great work with the art. The expressions on Keepsake and Thea are especially well done, and there are some nice visual jokes (such as drunken aliens in the bar) that stay the right side of silliness. Death’s Head is nicely rendered, although he strangely never appears too prominently, as if Higgins wasn’t confident or happy placing him centre-stage (whereas some of the supporting characters get half-page illustrations). With the various artists contributing to the series, it’s noticeable that Death’s Head is proving a strong enough character design to accommodate a number of styles.

After the human-centric artwork last issue, we get lots more weird characters filling the background, particularly during Death’s Head’s enquiries (a bar full of sloth-like creatures on the ceiling, a couple of alien street walkers that shake the mechanoid’s cool reserve with a solicitous whisper). The scenery also feels more authentic to the world of 8162: Los Angeles being a metropolis island in a barren landscape.

Great review. I had no idea Keepsake came from the pages of Doctor Who! Nice to learn things like that.