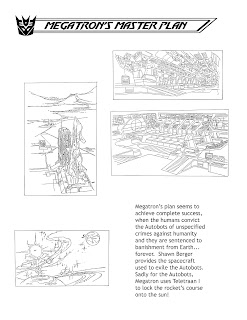 Time for another edition of The Ark Addendum, coupled with, for the last time in the foreseeable future, a script.  This is the last of the 'incomplete' scripts that I got in the auction.  Actually, the script is complete, but it's part one of a two part episode, and part two wasn't up for auction.  Yup, Megatron's Master Plan.  Long time readers may remember that I've done other models from this episode as one of the very first Ark Addendums I ever published.  I've got quite a few more from this episode that I'll get to eventually.

This time we're looking at Berger's rocket ship.  I'll be honest; I never liked the design on this one.  The exterior is pretty cool, I suppose, but the interior looks a bit too much like a commercial airliner to me.  The Autobots all sitting down with nothing to do looks wrong to me somewhere.

The script itself is pretty interesting.  Friedman directed them to change the name Burger to Berget (pronounced Bur-Gay or Bur-Jay or Bur-Get), since Burger doesn't sound "heavy enough."  I guess that didn't happen.  Here's the script download link: http://www.mediafire.com/view/?2dgku1yu6r6u2fa
Posted by Jimtron at 10:07 AM