Under Fire! Is th 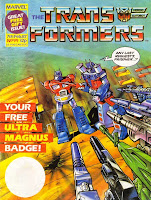 e 99th issue of the Transformers book published in the UK by Marvel. It follows straight on from the tense cliff-hanger ending to #98, where Prime is held at blaster-point by the Wreckers. The script is by Simon Furman, Jeff Anderson continues to provide the art, Anne Halfacree the lettering, Steve White the colours and Ian Rimmer edited.

The cover is by Lee Sullivan and shows the dire situation quite effectively. Sullivan draws his Transformers in a very colourful, naturalistic style that reminds one most of the Sunbow cartoon. His work is far removed from the stiffness of Will Simpson and, in this one image at least, probably beats Jeff Anderson for believable robot body language. That said, there are things wrong with the cover. To my mind the figures of Ultra Magnus and Optimus Prime are slightly too small, giving us too much of the background when the focus should be on Prime's desperate situation. A smaller nitpick would be that there are more guns in the image than Wreckers in the actual story, but I am a big believer in artistic licence in my comic covers and I think we can excuse this.

Before we find out what has happened to Optimus Prime we have a full page devoted to Outback charging along in his hovering vehicle mode, talking to himself. He lays out his character: a maverick who doesn't play by the rules and seems to survive despite an extremely unenviable tendency towards bad luck. He believes that the real Optimus Prime saved him (last issue) and feels a certain kinship with him, as another Autobot who has cheated death numerous times. He approaches a group of robots who turn out to be...

Optimus Prime, in restraints, being held by a Wrecker firing squad! I quite like the staging here. Prime looks anguished, struggling with his bonds, and, in a lovely nod to tradition, Ultra Magnus is brandishing an energon sword with which to administer the fatal order. The only thing I'm not so keen on in this scene is Outback's appearance as none of the characters are looking at him or reacting to him in any way. He transforms and tells Ultra Magnus to stop, that they are being played for fools.

Ultra Magnus is having none of it. Outback is well known for insubordination and Magnus would rather trust his spies over him. Outback persists however, accusing Magnus of acting rashly due to guilt over Impactor's death. On my first reading I was not sure if this was a very good assessment, as it seems likely that such guilt would make him want to make doubly sure that another great Autobot does not fall due to his mistake. However, given how much chaos and carnage a fake Optimus Prime could potentially cause for the Autobots, I am willing to accept that Outback might be right.

Outback pretends to back down and goes to apologise to Optimus, secretly planting a bug on him that dissolves the energy restraints. Outback throws a gas bomb and they escape in the confusion.

Optimus Prime is unhappy to be fleeing, because he feels that he should have been able to talk the Wreckers round. Outback points out that it wasn't going very well so far and that at least this way he can live to try again. Optimus agrees but still says that it "goes against everything [he] stand[s] for". Prime is rather unusually inflexible and perhaps even slow-witted here. Outback is so clearly correct that it is not even a usable source for conflict. It's fine that he says his priority is to clear his name, but there was nothing to be gained from staying behind, and it shows rather less gratitude for the risks Outback has taken than Optimus Prime usually displays. There is a slightly sinister panel where we see that Ratbat (in his first appearance in the UK book, and therefore, in the overall timeline) has been observing the whole time.

Back with the others we find Magnus ordering the Wreckers to stand down. He will take three Guardian units and take up the pursuit himself. This seems to be pride and bravado speaking. Optimus Prime escaped while Ultra Magnus was in command so it's down to him to get him back but I can't help but think this is also an acknowledgement that Prime might have been telling the truth. Note that the troops that Ultra Magnus chooses to take with him are unliving constructs who, by definition, cannot take blame for anything. He could have had his pick of Wreckers but instead decides to go it effectively alone. He does not believe Prime but if Prime IS telling the truth, then it will be on Magnus' head alone. 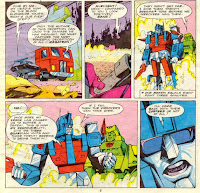 Back at Decepticon HQ, Megatron receives Ratbat's news of Prime's escape and reacts... badly... smashing his fists into the wall and raging. Straxus taunts him for his outburst but Megatron responds by pointing out the fragility of his life support system, although he needs him for now, so he can organise his troops for Megatron. Megatron exits, knocking Octane out of the way. This non-speaking role could have been anyone, or a generic, but Furman uses someone who he gave a cameo to in Target:2006 and will feature heavily in a couple of issues time. Good attention to detail.

Ratbat feels that Megatron is becoming a liability but Straxus tells him to tolerate him for a while as they are still assembling "the equipment" and that when Straxus "strikes" Megatron will be gone and Straxus will "truly live again". I wonder what he can be talking about?

Back with Ultra Magnus and we find that he is indeed having doubts, wondering if Outback might have a point about his guilt over Impactor. He is shaken from his reverie by an explosion and we find that the Guardians have found and engaged Prime and Outback.

They fight but are swiftly being overwhelmed. Outback shoots a Guardian to save Prime but leaves himself vulnerable and a second unit rakes its claws through his chest module. Prime manages to tear its head off and is left holding the critically wounded Outback. Prime delivers a soliliquy on the futility of war and how it turns its fighters into worse than the mindless drones. Prime decides that to prove he is any different he must do everything in his power to save Outback. From the shadows, Magnus watches, perhaps he has overheard and now knows that Prime is the real deal. Find out next issue!

This is very much an issue to move things along. Everything that happens is necessary for the plot to continue but none of it is very exciting. We knew Prime would either escape or persuade the Wreckers that he wasn't a spy and the former was the more dramatically interesting outcome. Optimus is definitely out of sorts this issue, if not necessarily out of character. He has been through an awful lot in the last four issues so I'll let you make your own judgement. My feeling is that the combination of seeing a bombed out Iacon along with not being trusted by his own Autobots has taken a serious, and understandable toll. Outback's plight seems to give him his determination back but will he be too late? Outback seems to think so.

More interesting this issue is the characterisation of Ultra Magnus. Furman seems to have an idea of Magnus as a solid, determined warrior type, who tends to work best alone. He had him largely one-on-one with Galvatron in Target:2006, has him hunt Prime alone in this issue and, later, in the IDW universe, would turn him into a solitary Autobot peacekeeper who roamed the galaxy in his personal spaceship, righting wrongs. It was a good look for him.

ron and Straxus scenes are intriguing but do not really pay off in this issue. Decepticon power plays usually make for good drama though, so hopefully we will get more of this before too long. It's nice to see Ratbat here too, prior to his debut on Earth in the US issues. The little cassette would become far more important than anyone who just saw his toy would ever have guessed.

The other major character in the story is Outback. Furman goes to a lot of trouble to characterise him as a maverick who thinks his time is up but it falls a little flat to me. It doesn't make much sense that Outback would be cursing his perpetually ill luck while simultaneously pointing out how many times he has cheated death against impossible odds. Prime feels guilty about his own good fortune because so many others have died, sometimes even from his own orders, while he has carried on for millenia. Outback just feels like his personal luck is going to run out and he is going to die. Outback says he has nothing to lose but Prime has everything to lose. It's a false comparison. Outback comes across like a manic depressive with an unfounded problem against authority whereas Prime is a careworn leader who has been through too much. I can see what Furman is trying to do here but Outback's characterisation is too scattershot for it to work as powerfully as it needs to.

Jeff Anderson's art continues to be pretty good. The battle with the Guardian units flows well and is easy to follow and I am particularly fond of a panel where Ultra Magnus is striding through a cloud of gas, sword in hand. I have always loved Magnus' design and Anderson shows it off well here.

An issue where nothing Cybertron-shattering occurs but with events that should pay off next time. Not a bad issue per se, but far from a great one.

If you want to read Under Fire! you can purchase IDW's collection: Transformers Best Of UK: Prey
Posted by Bishbot at 12:20 PM