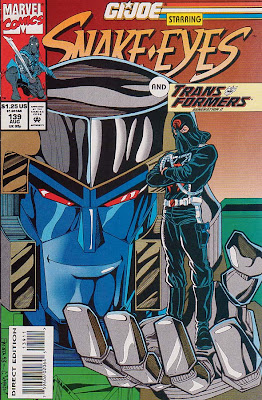 Continuing where we left off last week, we cover the TF G2 / G.I. Joe crossover that served as a prelude to the Transformers Generation 2 comic.  Issue 139 of the Joe book was written by Larry Hama, of course.  Pencils are by Chris Batista, with inks by a plethora of folks: Baskerville, Hudson, Williams, & Wallace.  Rick Parker provides letters, with colors by Sharen & Witterstaetter.  It sounds like they had a bit of trouble putting this issue together, what with the shift in artists and the large number of people working on it.  I wonder if there was an unusually long approval time on the script; it'd make sense, since this crossover was almost certainly mandated by Hasbro.  The cover is also by Chris Batista.

The cover is quite nice.  A blue-faced and green bodied Megatron smirks at the reader as he holds Cobra Commander's scowling form up.  Simple, effective, and gets the job done.  It looks like a Transformers baddie is aligning himself with the forces of Cobra.  The coloring in Megatron is a bit intriguing, though.  If one were inclined to be slightly churlish, one could point out that the anatomy on Megatron seems a bit off.  Try to hold up your hand like he's doing; it's difficult to do so naturally.  Still, I'm inclined to let that flaw go as the composition of the image works really well, demonstrating both scale and emotion and theme. 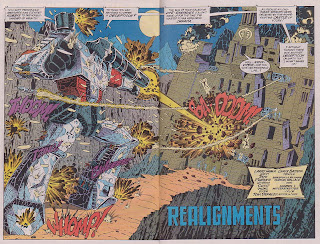 The book opens up, though, pretty far from that image.  Cobra Commander, Zarana, and Dr. Biggles-Jones run away from an irate Megatron.  It seems that our dear Decepticon was outraged at Cobra Commander's temerity in proposing a deal last issue, and is proceeding to demolish the transforming castle that lured him all the way from Canada in an amazingly lovely two-page spread.  Yup, right around here I fell in love with Chris Batista's artwork.  I even have a few originals, sadly not this one.

While Cobra Commander and Zarana flee, Biggles-Jones strikes back with her rail gun, firing a projectile that bisects Megatron and continues to go into orbit!  Yeah, pretty impressive tech, that is.  Megatron think so too, and quickly identifies the source of his pain.  Before he can smash the 'disgusting carbon-cycle creature cluttering it up,' though, Cobra Commander stop him by informing him that she is the very designer of the not-quite debugged weapon system that's caught his attention.  Megatron proposes a trade; the contents of the Ark for the rail gun and a complete system refitting and upgrade.  After all, he looks like he's still suffering from the impact of a forced planetary landing, with cracked armor, exposed wires, and two new rail gun holes in his chest. 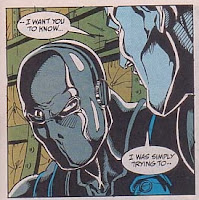 Of course, it's not all Transformers, all the time.  Scarlett's wounds are treated by a medi-viper, even as Slice remains skeptical.  Meanwhile, the Joes continue their withdrawal from the castle with Destro and the Baroness in tow.  Destro attempts to comfort Snake-Eyes, telling him that he had little choice but to act as he did, but is silenced with a glare.  Storm Shadow lets the former Cobra officer know that Snake-Eyes blames Destro's actions for putting Scarlett in harm's way in the first place.  Batista handles the facial expressions well, which is important with a mute character.

Back to the robots, though!  Megatron is being disassembled, with much exposed wires and circuitry.  I rather like the various pieces of detritus being carried away by pulleys, including part of his back and his beloved fusion cannon.  (Note - I don't quite get why Megatron would give up the fusion cannon though.  Sure, a shoulder-mounted rail gun is nice, but why not both?  That's why the 17-year-old me got a spare beat-up Megatron from a comic shop and did some surgery, adding back his fusion cannon to the G2 Megatron toy.  By the way, it looks AWESOME!  The G1 Megatron toy's cannon was always a bit too big for his arm, but it looks perfect against the monster that is G2 Megatron.)  Zarana suggests pushing Megatron around now that he's at their mercy, but Cobra Commander opts to stick to the letter of the deal... which amuses Megatron.  Somehow I don't think he's quite as helpless as Zarana thinks, disassembled or no. 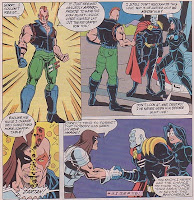 More Joe business (hey, can't begrudge them that, it's their book) occurs when Biggles-Jones checks up on Scarlett, who is in amazingly good shape; wound parallel to the muscle striation, no ragged edges, no arteries severed.  This, of course, does little to blunt Slice's suspicions.  The Baroness and Destro land on Cobra Island, which was of course the site of much of the first G.I. Joe / Transformers crossover.  There they meet Destro, who shows off his new toy look for them awkwardly.  They are investigating the abandoned Cobra facility, with an intact brainwave scanner but missing Mindbender's cloning vat.  Zartan speculates that it might contain the secret of Mindbender's resurrection... 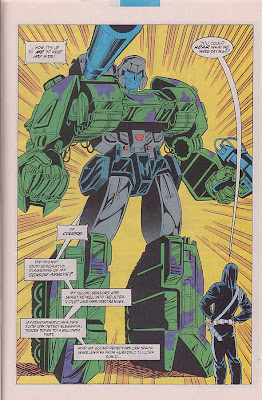 The time has come for the big unveiling.  A green and purple camouflaged tank rolls out and effortlessly destroyes three remote-controlled HISS tanks.  The Cobra leadership is impressed, and Megatron is pleased.  Much like the Zartan reveal from a few pages earlier (a bit too much like it, actually - compare the two drawings and judge for yourself), he transforms and shows off his goods.  He reveals that he heard Cobra Commander reject a betrayal a bit earlier and brags about his sensors.  This bragging leads him to talk about an experiment in the basement, 'inert organic tissue percolating in an electrolyte-rich protein bath with a pure oxygen aerating system.'  Cobra Commander is dismissive, at least until Megatron informs him that the inert organic tissue has just started breathing.  Yup, you (and Zartan) guessed it, Dr. Mindbender is back!  Of course, if you weren't following the Joe book, you wouldn't have known he was missing but it still seems like a decent (and appropriately Joe-centric) ending for the book.

Unlike the last book, this one squarely splits the focus between the Joe cast and plotline and the appearance of Megatron.  While I can see how that might have been frustrating for long-time Joe readers, as a Transformers fan like myself it's like a breath of fresh air to read about these characters again.  Hama's writing and Batista's artwork feel very much like the latter-day Furman/Wildman collaboration in tone and style, which helps keep a feeling of continuity.  Hama really nails Megatron's personality, running from hot to cold very very quickly.  He's really a very different kind of villain than the political and conniving Cobra Commander.  Megatron is shrewd but mostly gets what he wants through force of arms.  Cobra Commander is far more devious. Hama does write Megatron a bit robotty in places, especially the line "I need to reconfigure for optimums efficiency!  Anthropomorphic dexterity and mobility are also unessential for present tasks... which are best accomplished by a dedicated weapons system!"  OK, it's a fair bit of rationalizing him turning into a gun, but I have a hard time believing Megatron would actually say that.  Shockwave, sure, but not Megatron.

On the Joe front, the Scarlett / Snake-Eyes plot seems mostly to be on hold.  Since that was the main emotional driving force of the past few issues, that's unfortunate.  We don't really advance from where we were last issue, except to know for sure that she'll live.  I suppose we see a bit of Snake-Eyes' reaction to stabbing the woman he loves, which is nice, but it feels like there should be more of that.  I suppose that toy concerns brushed that aside.  After seeing how effortlessly Furman seemed to dance around the new-toy requirements, it's slightly jarring to go back to something a bit more akin to the middle Budiansky period of awkward (re)introductions. 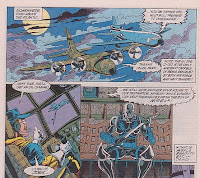 I do like Hama's use of military jargon and information when appropriate.  Things like page ten, where we get information about the C-130 aircraft and the acronym MRE for food are nice.  Batista also seems to have done his homework (or a great job of faking it) when drawing the interiors.  I can see why his run on the Joe book is considered so seminal by their fans, and hope to get around to reading the whole book from the beginning at some point.

So, overall, a fairly strong offering, both from a hardcore Transformers perspective and a casual Joe perspective.  Great writing, great artwork, and a mostly pretty good plot marred only a bit by corporate concerns.  Sadly, this book has not been reprinted to my knowledge, but who know?  IDW owns the publication rights to both Transformers and G.I. Joe, so mayhaps it's possible they'll reprint this rather fun little tale in the future.  We can hope, anyway.  "Next: Dr. Mindbender?!?"  Let's see how that works out, one week from today!
Posted by Jimtron at 11:04 AM

This was a fun issue for me to get back into the groove of things. And it helped elevate my interest in G.I. Joe, too-- previously, my exposure was little more than the cartoon. I never even saw the GI Joe crossovers until years later.