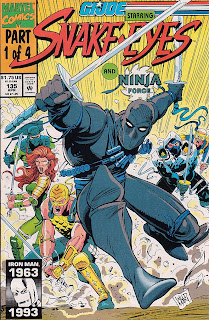 Well, that's it, right?  Transformers is over, finished.  Or... is it?  After all, while Generation One ended back in 1991, Generation Two started up not all that long later in 1993.  Might we get some comic support?  We might.

Enter the G.I. Joe book.  It had been going strong for years, and managed to outlast The Transformers.  However, nominally, it was in the same continuity as the old Transformers book.  In issue 138, we catch a few glimpses of Megatron, and then we get a four-issue crossover story set entirely within the mainstream Joe book.

To really understand that story, though, one has to examine what came before, which was sort of billed as a four issue mini-series.  All four issues featured the same creative line-up.  They were penned by Larry Hama, as indeed all of the Joe books were.  Wildman and Baskerville provided pencils and inks, a treat for an old Transformers fan like myself.  Bob Sharen was the colorist, and Rick Parker, another familiar name, was the letterer. It starts with G.I. Joe #135, Ninjas Own the Night.  Scarlett is fed up with the lack of acceptance the Ninja Force has for her and storms away from them.  It turns out to be a ruse, though, designed to make it look like she's gone rogue so she can infiltrate Cobra.  We also meet one Doctor Sidney Biggles-Jones, a genius who has designed a rail gun that Cobra wants.  The Cobra ninjas, the Night-Creepers, kidnap the latter.  They also pull off various nefarious schemes, including staking out the Ninja Force.

Issue #136, Reversals and Betrayals!, continues the battle. Naturally the Joes end up victorious, then help thwart a Night-Creeper assault at Andrews Air Force Base in Virginia.  Scarlett, though, is nabbed while on vacation and brought before Cobra Commander at a transforming castle recently reclaimed from Destro and The Baroness, who at this point in the story are allies of the Joes.  Biggles-Jones and Scarlett both wind up agreeing to join Cobra.  The creative lineup was unchanged from the previous issue.

Issue #137, The Traitor Strikes!, kick off with the ceremonial induction of Biggles-Jones and Scarlett into the forces of Cobra.  As a test of loyalty, they are sent off to sabotage a munitions manufacturer with their own rail gun.  They do so, and during the course of the ensuing battle with G.I. Joe Scarlett fires at a jeep containing General Hawk and Striker and seemingly causes an explosion that kills them both.  It turns out that they were wearing special suits to simulate severe burns, having been warned by Destro and The Baroness.  The ex-cobras have escape from the castle's dungeon and into the guts of the castle. 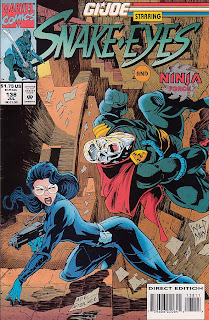 Issue #138, Unfoldings!,opens with a Scarlett wracked with guilt.  She doesn't have long to wallow, though, as they and the other Cobra soldiers are sent into the castle to flush out Destro and The Baroness.  The latter two have requested an extraction from the Joes, and create a diversion to do it.  The diversion involves shifting the castle into a halfway state between its two stable configurations, causing continuous transformations to allow for relative stability.  However, someone, or something, notices the shifting castle...

Scarlett and Biggles-Jones track Destro and The Baroness to the roof, where they confront the G.I. Joe Ninja Force.  Seemingly without hesitation, in full view of the Cobra ninjas Slice and Dice, Snake-Eyes stabs her through the chest, a fraction of an inch from her heart.  As the Joes withdraw, she cries, though they're tears of joy, not pain.  Snake-Eyes never misses, which means he knows that she isn't really a traitor.  The issue ends with Megatron falling out of the sky, drawn by the transforming castle.  His annoyance is interrupted by Cobra Commander, who attempts to open negotiations.  Yup, the Transformers are back!

It's a decent tale, though I find all the ninjas running around just a bit silly.  Perhaps that's hypocritical of someone who loves giant robots who turn into cars and jets and tanks and sometimes have humans for heads and sometimes disguise themselves as giant undead samurai.  Still, G.I. Joe always seemed to me to be about the military, and the ninja imagery didn't quite fit in.  There's a fun bit early on where the audience is mislead to think that the male in the labcoat is 'Doctor Sid,' leading to some shock when the Cobras kill him instead of the attractive woman we assumed was the lab assistant.  There seems to be more going on with her than meets the eye, if you'll pardon the pun, as if Biggles-Jones has some sort of hidden agenda.  Perhaps we'll learn more about this brilliant scientist in the future.

Speaking of hidden agendas, I find it a bit hard to believe that Cobra Commander would so readily accept Scarlett as a member of his team, though the fact that he's such a megalomaniac makes me think it's just barely possible.  Slice certainly remains skeptical, even after she gets stabbed through the abdomen. Scarlett's dilemma was enjoyable to read, and her pain when she thinks she's killed two of her teammates.  Mind you, that plot point seemed a bit silly, but I'm willing to accept it for the emotional payoff we get.  I also like that Slice remains skeptical of the once and future Joe, even after Snake-Eyes stabs her.  Given his skill level, a non-lethal blow might make me a bit skeptical too.

Oh, but that's not what readers of this blog want to hear about.  Odds are good that you want to hear about giant robots.  Well, I'm happy to say that the one and a half panels of giant robots we see are quite lovely.  It starts with the mysterious bit midway through the issue where we first see a hint of the Decepticon presence.  We get the old, familiar square speech bubbles as Megatron discusses the situation with someone else.  Given the occupants of the Ark, logic dictates that he's speaking to either Starscream, Shockwave, or Galvatron.  Since Shockwave and Galvatron have a very different head-shape than the character we see, and indeed weren't going to have a Generation Two toy, it was most likely supposed to be Starscream.  That plot point would get dropped, though. 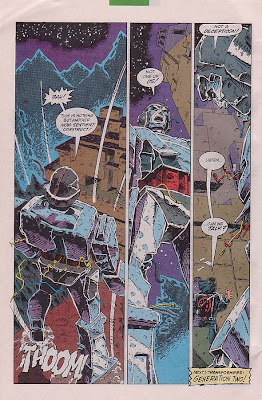 Then, at the very end of the issue, we get a battered Megatron, with wires hanging loose and beat up panels.  This image makes me think that he only recently came on-line after the crash of the Ark, though that point too would be contradicted.  Though we only get a bit of time with him, his irritation at flying all this way only to find a non-sentient human construct seemed completely in-character.  Cobra Commander's proffered hand of friendship hold out all kinds of intriguing story possibilities.   Wildman's artwork is as lovely as ever, and the battle damage gives Megatron a great texture.

When I first read issue #138, I could scarcely believe that the Transformers were back.  The last twenty of so issues of the comic were so strong, had made such an impression on me that my flagging interest in Transformers was revived and would never again flag.  This issue helped fan the flames, made me excited all over again to read tales of the heroic Autobots and evil Decepticons.  It's really nothing more than a teaser, at least as far as Transformers content goes, but it's an incredibly effective teaser.  That Baskerville, Wildman, and Parker were all involved was another happy accident, one that helped remind the audience of just how good Transformers was by the end.

To my knowledge they have yet to be reprinted, which is a shame though I can see that it'd be pretty hard to market. If you get the chance to read it, do so, though you can probably skip straight to G.I. Joe 138 if you're not a fanatic.  While 135-137 help explain what's going on with the Joes, all you need to know about the Cybertronian side of the action is contained in issues 138-142.  Next issue, we're promised Transformers: Generation Two!  I can't wait to see where they go with it.
Posted by Jimtron at 8:17 AM

I assume that since Hasbro owns the comic series for both properties now, where they didn't at the time of Titan reprinting Generation 2 previously.. and one company now having the reprint rights to both.. they should be included in one of the future Classic GIJOE volumes from IDW..

Though it really would fit better just included with the G2 comics.. as it basically was completely ignored by #143-155 of the GIJOE comics.. it was a strange situation for sure..

I think the subsequent ignoring in G.I. Joe was because Larry Hama was generally hostile to the idea of crossing over the two properties as he wanted to keep G.I. Joe as close to realism as possible (not helped by some of the stuff Hasbro came up, or by animated adverts for the comic that dictated some of the more sci-fi plotlines). Prior to this story the original G.I. Joe vs Transformers mini series was completely ignored by the rest of G.I. Joe continuity and there was even an issue of G.I. Joe: Secret Missions from just after the mini that showed the Transformers as a toyline in the G.I. Joe universe. This crossover seems to have begrudgingly tolerated at the time then subsequently ignored altogether.

I tend to ignore pretty much everything after the Cobra Civil War storyline... in the GIJOE comic.. The girth of the toyline was simply getting too big to try and showcase in a comic book.

I actually rather liked how Devil's Due rid themselves of the problem.. It was all simply the mad ravings of the clone Mindbender's brain reforming.

Yeah, G.I. Joe kind of had to ignore it, as Transformers: Generation 2 kind of took things to a widescale global level of destruction, and used the Joes in its own ways. Kind of a split timeline thing, I guess.

I remember hoping Transformers would return to comic books after seeing the new toys (and comic-puzzle in the Walmart restaurant's kid's meal, which was woefully uninformative). The first one I saw was the issue after this, though, but I never really gave up on the Transformers... and was glad to have them back.

I walked into my comicstore in Amsterdam, and suddenly saw a G.I. Joe comic with Megatron's head on the cover :)
That was issue # 139 I guess, but that was my first introduction to the fact that The Transformers were back in comicform.
When I opened it up and saw the two page spread of a battered Megatron shooting at the Cobra castle, my jaw nearly dropped to the floor. It still remains one of my most favourite pieces of comicart ever :)

One thing that rankles me about this storyline (and, by extension, Generation 2) is how Megatron is still walking around, but Ratchet is dead. Their nervous systems being connected seems to have been completely ovelooked.