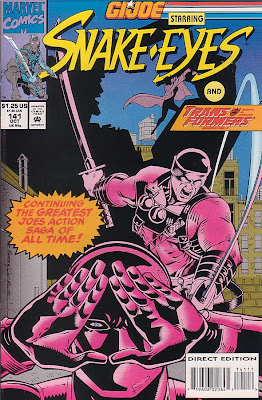 The next issue in the G2 prequel invasion of the G.I. Joe ongoing book is titled Sucker Punch.  We've had another creative shake-up.  Though Hama remains the writer, the book is now penciled by Steven Leiber & William Rosado, with Scott Moulter & Chip Wallace on inks.  Colors and letters are still by Sharen and Parker.  The cover is by Rosado and Wallace.

We finally get a cover that lives up to the nominal subtitle of the book, G.I. Joe starring Snake-Eyes (& Transformers Generation 2).  Snake-Eyes meditates, while a Cobra goon swings a sword at him.  In the background, a rather nice silhouette of Megatron grapples with a human in a lab coat, presumably Dr. Biggles-Jones.  It's a lovely cover, with some cool ninja action and some understated Transformers action in the background.  The inking that Wallace turned in is particularly nice, and I like the use of coloring to separate foreground from background.  It's only marred by the text "Continuing the greatest Joes action saga of all time!"  Umm, really?  I hope not.  It's a decent crossover, but as far as Joe stories go I'd assume that there are much better. Ah, well, a little hyperbole seldom hurt anyone.

The book opens with Megatron returning to robot form, much to Cobra Commander's consternation.  It was awkward when he assumed his tank configuration, and it's awkward now.   It's also odd, because Tunnel Rat says that he sees Biggles-Jones with Cobra Commander, but she's nowhere in the scene.  No time to dell on that, though, the recon squad is under attack by Cobra Eels!  Megatron alerts Cobra Commander to the battle, but declines to help his 'ally' as their deal was specific; Decepticon technology for Dr. Biggles-Jones, who's at the hospital.  (See?  They even acknowledge that she's at the hospital, and not hanging out in the street.)  It's nicely ominous, though, that we see what Megatron was really trading for, especially when he offhandedly references the need to pack her in liquid hydrogen.  She's not going to be going along as a partner, that much is clear.

At said hospital, Biggles-Jones confronts Scarlett about her status as a double-agent while the Ninja-Force looks in, unseen, from the outside window.  Their voyeurism is broken by an attack from the Cobra Night Creepers, which they quickly (and silently) dispatch.  The team is sent to back up the recon team in the sewers, though Snake-Eyes is more concerned about Scarlett, and gets the chance to remain behind when the Night Creeper Leader (that's his name) shows up.  They begin a furious battle across the rooftops. 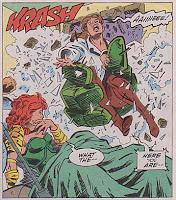 Inside the hospital, Scarlett insists on her sincerity, but Biggles-Jones informs her that she's not just guessing, she knows.  Meanwhile, Mindbender is listening in on their conversation through the simple expediency of having an empty glass pressed up against the wall.   For a couple of secret agents, they sure outed themselves in a spectacularly stupid way.  The artwork, as well, takes a turn for the worse.  I'm assuming that this is Leiber, as the ninja battle seems to match the style of the cover.  After cutting away for some other plotlines, we snap back to Biggles-Jones, who finishes telling Scarlet 'the whole truth.'  Unfortunately, we the audience never learn this truth, which is pretty clumsy. The reason?  Megatron's hand, crashing through the window.  The rendering isn't great, but the composition is fantastic.  It's very much inspired by King Kong, I think.


Slice and Dice look for Scarlett, who has seemingly vanished, but is actually hiding under the bed.  She manages to defeat the two of them, then lurches outside, making her way to the Ark.  Mindbender blows her cover and she has to battle a pair of Alley-Vipers, which she does effortlessly.

The conclusion of the Snake-Eyes / Night Creeper Leader battle is anything but effortless, though.  Snake-Eyes drops his weapons and takes the meditative stance he assumed on the cover, leaving the Cobra to puzzle through what's happening.  Bluff or technique?  He decides on bluff, charges forward, and is resoundingly defeated.  Yeah, Snake-Eyes is pretty bad ass.  Unfortunately for him, Hawk has just learned that there's another American security agency with a Cobra double agent, and the Joes have to cede jurisdiction.  Spirit and Storm-Shadow are dispatched to extract Snake-Eyes.  That won't be easy, though, he's ambushed by Slice & Dice, as well as a hundred cobra troopers covering every possible escape route. 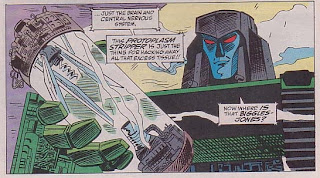 Scarlett, too, has gotten herself into a pickle, as she confronts Megatron, attempting to gouge out Biggles-Jones' brain with a Protoplasm Stripper.  I love the imagery here.  This isn't something that Furman or Budansky would have come up with, but it does seem very Megatron somehow.  Scarlett demands Megatron release her, standing up to the titan in a display of bravery bordering on stupidity.  How will she get out of this one? 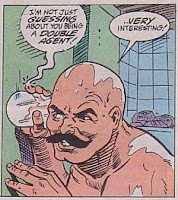 And there you have it!  We're all set up for the conclusion of this storyline.  Our heroes are certainly in dire straits, with Scarlett's cover blown and Snake-Eyes surrounded.  However, it does seem like we went to a lot of trouble to set up Scarlett as a double agent, only to have her discovered through sheer stupidity.  What was the point of this whole arc then?  I imagine having to shoehorn in Transformers messed up Hama's plans a bit, but the whole execution seems to have been bungled, I'm afraid.  Oh, well, he has one more issue to pull it out.  Having two different artists on the book also hurt, especially since their styles don't mesh that well.  After the lovely sharp lines and highly detailed pencils of Chris Batista, this issue seems like a step backwards.  Also, the pacing could have been much smoother.  This issue feels overfull, with running battles on the rooftops, in the sewers, Scarlett & Biggles-Jones conspiring, and of course the Machinations of Megatron.  Some of this should have gone in last issue, which was a bit light.  Don't get me wrong, it's a decent issue, there are just some flaws that mar it.

Since it's yet to be reprinted, it's not super easy to find, but if you're a fan of Transformers Generation Two this is a decent prequel, giving us a lot of Megatron to tide us over till the Transformers book resumes in earnest.
Posted by Jimtron at 10:51 AM

I heard somewhere that Larry wanted to introduce the new GI Joe robot toys during the Transformers tie-in (I assume those were the ones that appeared on the GI Joe Start Brigade arc), but something happened that skewed Larry's plans. So maybe that's the reason for the awkward crossover with the Transformers that we had.

But I found this issue was better than last, with the "fresh" creepy idea of Megatron removing Biggle Jone's brain and with the cool Snake Eyes' battle with the Night Creeper Leader.