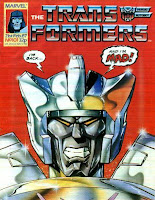 el: Part 1 was issue #101 of the UK Transformers book. It was written by Simon Furman, drawn by Geoff Senior, lettered by Anne Halfacree, Coloured by Steve White and edited by Ian Rimmer.

The cover was by Lee Sullivan. A full headshot of Galvatron - not looking terribly like either his toy or the cartoon model. The actual design is reasonably successful for what it tries to be, but really, this isn't a great image to illustrate this story and the speech balloons: "I'm back and... I'm mad" is too cute. Disappointing.
While Optimus Prime reunites with the Autobots on Cybertron Fallen Angel sees a return to Earth for both the setting and for one particularly menacing future Decepticon. Yep, as per his promise on the cover of the Christmas issue, Galvatron is back!
We open with the Autobots that Circuit Breaker had freed back in Decepticon Graffiti! issues #94-95 of the UK comic and issue #23 of the US one. They are traipising through the countryside trying to find the Ark. While they are talking, there is a massive outpouring of energy and Skids vanishes in a flash of rainbow light! "It begins again!" warns the caption. Regular readers of the comic will recognise this as the signature effect of somebody time-travelling, removing an entity of equivalent mass from the timestream.

Meanwhile, Centurion (piloted remotely by Professor Morris, last seen back in In The National Interest) is patrolling about when he sees an explosion that looks like a meteor impact and decides to investigate. As the human-built robot gets close enough to look into the crater a hand shoots out and grabs him!

We get a nice dynamic Geoff Senior splash for the title page as Galvatron leaps from the hole and attacks Centurion, ranting about someone named "Rodimus Prime". Fighting back p

roves essentially pointless as Galvatron takes a (strangely miscoloured) page to tear Centurion apart bit by bit, all the while mistaking him for Rodimus. After the deed is done, and Morris is left without a working robotic avatar, Galvatron calms down a bit and realises he hasn't killed Rodimus Prime. He works out that having fought Rodimus inside Unicron in 2006 (Transformers: The Movie - readers - you HAVE seen this) he escaped his plunge through space using the time-jump device that he had previously used in Target: 2006 and returning to 1986 (or '87, it's unclear why the time-jump takes Galvatron to the exact point we are at in the narrative instead of back to his original time-jump pre the events of Target: 2006). He hit the atmosphere at speed and plummetted to Earth, the impact disorientating him enough to mistake Centurion for Rodimus Prime.

Meanwhile, the other Autobots, minus Skids, are puzzling about a mysterious Transformer signature they have located in this area and complaining about being lost, as only Skids knew the way. They do not have to look for the source of the signal, as Galvatron

is approaching them, planning in his mind how to take over the 1986 Decepticons and prepare them for Unicron's coming. He sees the Autobots and rushes to attack as Perceptor and Warpath open fire on him. Undamaged, he transforms to Space Cannon mode and blasts them.

Nearby, at the Decepticon base, Shockwave, now in command because Megatron is still absent on Cybertron, sees the massive explosion from Galvatron's attack. He thinks it might be Megatron, ready to take his revenge (which, in a way of course, it is). Shockwave orders Soundwave and Razorclaw to mobilise and meet the new threat.

g him by a swift counterattack by Cosmos, Powerglide, Seaspray and Beachcomber that doesn't really damage him but knocks him off-balance. Blaster sees an opening and hits Galvatron with some high frequency sonics which disorientates him for a moment and brings back his madness.

As he recovers he sees the head of Centurion thrown at his feet. It is a challenge. The Dinobots are here and they mean to make him pay for their former ally!
After the thematic mess of last issue this is a welcome relief. Here we have a fast-moving, straightforward action storyline with big implications for the coming weeks. Moving back from Cybertron before Prime's storyline is concluded is a smart move from Furman, as it once-again expands the canvass on which he is working. There are now sufficient characters and sufficient potential plots to fill the two worlds and the layering that this gives to the narrative makes everything feel much grander and more believable.

Furman obviously loves using Galvatron as an arbiter of destruction and while it might be argued that it is a little cheap to reuse him in this way so soon after Target: 2006 lets not forget that the movie, and, more importantly, Galvatron's toy, were still current. Clearly, while this is not the case in the US book, the UK book treats Transformers: The Movie as canon, albeit still taking place in the far-off time of 2006. I predict continuity headaches in the future!

Right now though, it all fits together, and if I were to have any complaints about the issue it would be that it perhaps fits together too neatly. It seems frightfully convenient that the Autobots and Centurion were wandering this close to the Decepticon base and for Galvatron to happen to fall to Earth within walking distance. I can't judge it too harshly based on this, however, given how skillfully Furman weaves back in characters we might have forgotten about and gives us a story that really raises the stakes for the coming issues.

Senior's art is as superlative as ever and his depictions of the events of Transformers: The Movie are probably the standout. The only criticism I might make are that Galvatron, in his madness, almost looks like a different character from his more sane moments, but I suppose that is probably the intention.

A great, action-packed issue. It was reprinted by Titan and you might be able to get hold of that collection although it is technically out of print. Sadly it has not been reprinted by IDW because they do not hold the rights to one of the non-Transformer characters who will be appearing shortly.
Posted by Bishbot at 6:44 AM

you asked the question "why didn't Galvatron time jump back to the exact same point as in target 2006?". Well at the time I didn't think too deeply as to why Galvatron should appear months later, but looking at the issues in 2011 I have a theory.

This does however require a reinterpretation of the time line of the movie. If we assume it took place over several weeks at least Galvatron could be created in 2005 (as the film states in the opening monologue) and Unicron attack Cybertron in 2006.

The other theory is that the device could not travel back to the same exact moment due to Einstein's theory of relativity. The time device could not coexist with itself at an earlier point in time. Therefore Galvatron could only return to a point after he had already left.

Galvatron doesn't half look like Leonard Nimoy On the cover

It is a shame about that miscoloured page. It confused me when I originally read it. I assumed that it was deliberate – since comic book publishers were obviously incapable of error – and that it was meant to represent some surreal ‘red-mist’ perspective of Galvatron.

A shame, as it totally distracted me from some fantastic action scenes by Geoff Senior (not to mention the ‘death’ of Centurion). I think the colouring was corrected in the republishing.

Of course this creates the problem that Target 2006 explicitly takes place prior to Aerialbots over America, which is set on the 4th of July. That in turn runs into The Gift being clearly set at Christmas but referencing recent issues...

Gotta say, Tim, I'm pretty baffled by this comment. How could the movie in the comicverse take place in 86-87?