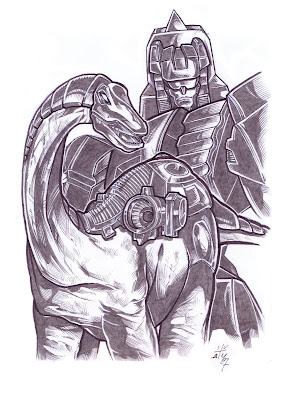 A new week dawns! The first week of spring. And what says Spring more than . . . the Dinoforce? Yup, time for another installment of Iván's Gallery. Continuing his examination of the Dinoforce, this week is Rairyū. Here's what the artist has to say about him:

A redeco of the Pretender Monster Birdbrain, Rairyu transforms into a quadrupedal monster-thing. He can also form the middle torso to the team's combined mode Dinoking. He comes with an armored apatosaur outer "shell" that he can fit into
Rairyu is the idiot amongst a team of idiots. When he manages to form a coherent word it is cause for celebration. Oddly, he still doesn’t attract the criticism or ridicule of his teammate Kakuryu. Still he is a vital member of the Dinoforce if only because his absence would leave Dinoking with a weaker stomach than normal.

apatosaur is what the TF Wiki calls the character's shell, btw.