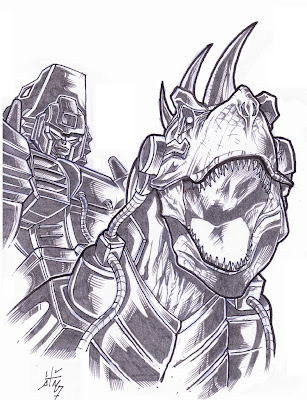 Almost done with The AllSpark Almanac! I may skip my customary Tuesday blog post, but thankfully I've got a talented roster of folks to help me pick up the slack. Case in point, Iván's Gallery, with an awesome member of Dinoforce: Gōryū. Here's what he has to say about him.

Maybe some of you not familiar with these transformers, Is the leader of the elite guard of Deszaras, leading decepticon in the series victory.
Is curious, in my country, the bending of this character was the same as dealing with megatron...
so it seemed even more threatening. This group, although it was very attractive, will soon step into the background, was replaced by brestforce led Leozack.
Indeed, they were repainted of Monstructor but, for this group the japanese added armor dinosaurs.
The toy is extremely difficult and expensive to find, and the truth is that it is ridiculously small, even so, I've always wanted to have one of them. Pity.
I think Jim will cause some problems while doing the second ark, seeking details of the armor.
I have many books of transformers in Japan, the truth is that there is little or no information about them, just the usual special techs or screenshots.
Posted by Jimtron at 2:13 PM

Sweet stuff man... I loved the Dinoforce, you're right, they're hard to come by... but gosh that's one kickass artwork =)