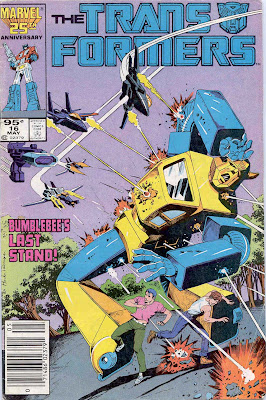 Plight of the Bumblebee! is the sixteenth issue of the Marvel US G1 Transformers run. It is the first comic not written by Bob Budiansky since he started his run, with Len Kaminski taking the reins. Graham Nolan and Tom Morgan provided pencils and inks, respectively. As always, Nel Yomtov colored the artwork, and newcomer Bill Oakley did the lettering. If you're thinking that this is pretty much a completely new creative staff (Yomtov aside), you're right. As a consequence, this will feel like a bit of a filler issue. Providing a bit of continuity, Herb Trimpe provided the cover.

And it's a very strong cover at that. Bumblebee is pelted by weapon's fire from five Decepticons, with bullets ripping through his body. Some humans cower behind him, though his body doesn't provide much protection. Bumblebee emerged as an early star of the Marvel Transformers comic, featuring heavily in issues 1, 11 and 14, so to see him menaced like this is fairly powerful. "Bumblebee's Last Stand!", we're promised, and while that's a bit of poetic license, it certainly serves to entice. Note that a very similar cover will be revisited in the near future for G.I. Joe #1.

The book itself doesn't quite live up to the promise of the cover. It's hard for me to put my finger on why. I think it's the disconnect in the writing style. The opening splash page is quite nice - a wireframe outline of Bumblebee, clearly using the toy as reference, with a computerized datafile full of information about him. That said, it adds to the disconnected feeling, having such a different artistic style, even if only for one page. Oakley's lettering is very nice, looking suitably computerish. I wouldn't be surprised if he used a typewriter or a word processor for those parts of the text. 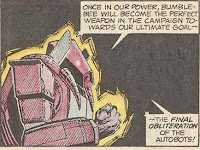 We then cut to Shockwave and cons, which oddly include Laserbeak and Buzzsaw, who just last issue were a part of Megatron's crew. Another oddity is that there are only two seekers present, Starscream and either Thundercracker or Skywarp. With Yomtov's coloring, I can't tell them apart. Further obfuscating things, the missing seeker's line in the issue is "Ah, fresh data! How exhilarating!" That doesn't sound like anything that anyone other than Shockwave or Prowl would utter, and further adds to the disconnected feeling. Shockwave's plan is to use an Electro-Calcinator module to take controle of Bumblebee's body. From there, THE FINAL OBLITERATION OF THE AUTOBOTS! (I love his panel, though I think Oakley could have gone a bit bigger on that last phrase). And so the Decepticons prepare to wait for the right moment.

The won't have to wait long. In the Autobot headquarters, the good guys are watching the news, which talks about a robot battle yesterday, with an editorial note telling us to see last issue for details. It's a rather transparent attempt at continuity, which doesn't quite track given the events of I, Robot-Master!. Oddly, Jetfire is one of the Autobots performing repairs - I'm sure it's a result of an old script getting used as filler, but one would expect Hoist to be doing the repairs. Prime asks after Bumblebee, noting that the diminutive Autobot hasn't been around recently, and that it wouldn't bode well for the Autobot cause if one of their best operatives were to fall. Bumblebee is outside, looking in, and can't hear what they're saying. It's fairly clumsy, since we the audience hear the Bots through the glass even as bumblebee cannot. Still, on a symbolic level, it works, showing Bumblebee's perceived isolation from his teammates. The poor little guy, not knowing how valued he is, drives away to spend some time on his own.

Outside of town, Bumblebee sits in sorrow and envies the humans. They're so weak that they all need each other. This is an interesting perspective, probably worth exploring. After all, a Transformer can live on his own for millions of years. In a sense, they really don't need each other. Wonderfully expressive artwork by Nolan and Morgan, by the way. Alas, comics can't abide introspection for long, and Shockwave soon launches his attack. The vertical panels used to show the jets flying up are clever, a good choice. Soon Bumblebee is injured and running (well, rolling) for his life. In his injured state, he realizes that he can't outrun his pursuers, and so decides to hide in plain sight by powering down on a car lot. It works out, probably because Shockwave needs Bumblebee intact and can't just blow all the cars away. Still, the ever-logical Shockwave is nothing if not patient, and so opts to wait.

Once again, it won't take long. Later, that night (and, by the way, great inking and coloring by Morgan and Yomtov here, the same pencils look completely different at night), a couple of hoods break into the lot and decide to steal . . . a Volkswagen? At least Kaminski acknowledges how odd this is, by having the characters comment on it. (Their logic - no one will miss a Volkswagen - is pretty shaky.) Soon they're riding high, having manually overrided Bumblebee's primary motor functions. He's still injured, unable to talk and warn them that their actions might prompt a Decepticon response. That response takes a bit of time to come, though. First they joyride around town, riding on sidewalks and getting into races. Bumblebee, oddly, is glad to be useful to them and helps them with some extraterrestrial speed . . . until his motor conks out, anyway. One of the delinquents manages to do some repairs and reconnects his primary power supply, just in time for the Decepticons to attack!

Once again, Bumblebee is pursued by five flying weapons, though this time he has passengers on board to keep safe. Add to the mix the air force, pursuing the Cons, and the police, chasing after the speeding car, and you've got a recipe for wackiness. If I seem underwhelmed, it's because I am. We've moved away from introspection and into a silly chase. Cornered, Bumblebee Transforms and gets ready to make his stand . . . only to have his cyber-bacon saved by the late arrival of Jetfire. His savior gets shot down, and Bumblebee is forced to choose between saving his 'new friends' and helping Jetfire - he opts to pull the humans to safety. However, he's spared any consequences from this choice, as the arrival of a fleet of jets, police and Autobots prompts Shockwave to withdraw. Bumblebee, reassured that his colleagues value him, decides that he belongs with them and not with humans.

Yawn. There was a bit too much farce in this issue, that could have been a decent chapter in the Transformers saga otherwise. Bumblebee's angst seems to come from nowhere - in the past he's always been cheerful and almost cocky. His willingness to put some humans in danger to help other humans who just happen to be riding around inside of him seems odd. Even as a kid, this one seemed out of place to me. Off characterization combined with a throw-away plot yield a fairly forgettable chapter of the Transformers saga. There is some nice artwork here, and some potentially interesting concepts raised, but ultimately neither amount to much.

Plight of the Bumblebee! is the last story in the IDW anthology: Classic Transformers, Vol. 1

, overall a strong volume that I'd recommend buying.
Posted by Jimtron at 11:26 AM

One does wonder at the history of a story like this. Did Marvel request a story or two that they could keep "in the hopper" in case Budiansky fell behind? (Is this standard procedure for comics?) If so, it's hard to imagine how it could be anything other than a "throw-away plot," even though I'm not inclined to give it too much credit even under that excuse.

Around the same time the final season of the cartoon was ending, I was rediscovering the comic book——and decided to buy a whole ton of back issues from a mail-order comic book warehouse to complete my collection. This was the first "new" issue I read, and I instantly regretted buying it (and prayed that the rest of the back issues weren't this horrible).

I, too, have wondered why Marvel chose to print a filler story like this. It was published in May of 1986, which makes me wonder if there was something going on related to The Transformers: the Movie. Marvel was getting particularly ambitious, and by the end of the year they were publishing the movie adaptation as well as the TRANSFORMERS UNIVERSE series and the crossover with G.I. Joe. Budiansky wasn't involved with the movie adaptation or the crossover, though, so I wonder if he just got really busy with developing TRANSFORMERS UNIVERSE or something?

Something interesting about the version of this issue that was printed in digest format for TRANSFORMERS COMICS MAGAZINE is that the cover was recolored in similar but not identical colors——only this time Thundercracker is entirely purple!

I don't even remember the story at all but the cover did catch my attention- that I remember.

If I had to guess I would say they were giving Budiansky a break & yes- it is something I've seen done on other comic titles. It's true that he helped provide names & bios for quite a few of the characters so its possible that he was otherwise busy. You could always ask him.

I should be clear. I already know that other titles have a long tradition of using fill-in stories. The question I'm having is more "was this pre-prepared just in case, or was it written only after Marvel knew they'd need a fill-in?"

If the former, it would pretty much have to be modular. If the latter, it could have done more to be a part of ongoing continuity, without relying on a few editorial tweaks.

The story told is that originally this issue was going to be a fill-in by Peter David (very early in his comics career) which would also have featured Bumblebee (for what it's worth many years later David recalled writing the story and assumed it was printed at the time). So my guess is that this story is a very late in the day fill-in and there wasn't much time for editorial to sort out which Decepticon was hanging out with which leader.

The Marvel editorial policy of the time was to have some fill-ins on standby and was very firm at making sure the books shipped on time which didn't leave a lot of time for the finer points of continuity. (Jim Owsley, briefly the TF editor, has recalled almost locking writers and artists in the office with him for the night to get emergency fill-ins done.) There's a Spider-Man issue from around this time that creates similar problems because it muddled up the two Hobgoblins.