I've been completely broke this week (poor Traffic Stop got plowed into while she was sitting patiently for me in the parking lot at work, so she's been in the shop getting patched up) so instead of gobbling up a bunch of new toys this pay period, I'm sifting through some older toys I've gotten in recent months but never had a chance to write about them. Yes, it's more fun with those adorable Robot Heroes this week, because nothing says "Hasbro loves me!" like tiny little poly-vinyl chloride figurines of beloved Geewun characters! 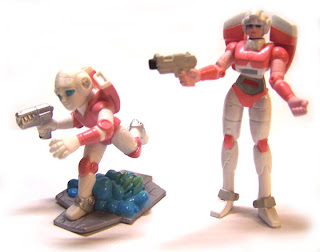 Arcee is the second-most forsaken of the characters introduced in The Transformers: the Movie, and the only one of the new Autobots introduced in the film who was completely absent from retail shelves in 1986. (The top honors in the missing-in-action category go to the Quintessons, whose movie likenesses have never been produced as merchandise of any kind in an official capacity. No, I don't count the ridiculous Alpha Quintesson toy from the Energon line. But I digress.) Takara did come up with a reasonably decent prototype, back in the day, but the toy never went into production, presumably because (or so the contemporary reasoning went) that Transformers was a toy line for little boys, who wouldn't want to play with female characters. Arcee has been addressed by Hasbro and Takara a handful of times in recent years, sometimes as a reimagining of the character (she was inexplicably turned into a spider when she was issued as a Transmetal Blackarachnia redeco as a BotCon 2001 exclusive; she's also been a motorcycle a couple of times, in the Energon toy line and again for the 2007 movie assortment) and sometimes as a tribute to the original character (the Super Collection Figure/Heroes of Cybertron figurine was a good likeness of her cartoon incarnation but didn't transform; the upcoming, highly-stylized Animated toy is loosely inspired by her original animation design), but so far there has been no transformable toy that represents Arcee as she appeared in G1 (there was a prototype for the Titanium Series that looked promising, but was abruptly cancelled).

With that in mind, Arcee is unique in that she's the only one of the G1-themed Robot Heroes toys who doesn't have a transformable Hasbro counterpart. (Dispensor from the CGI movie assortment falls under this category, too, but I'm sure his lack of a proper toy was due to licensing issues with Mountain Dew.) Curiously, rather than referencing her animation model directly, the sculptors seem to have relied on the appearance of the Heroes of Cybertron figure—assuming, perhaps, that it was accurate enough to use for reference. The dead giveaways here are the Gundam-like ankle cuffs and her shortened silver pistol, which are taken directly from the SCF/HoC sculpt. (Arcee went through a number of different guns in the movie and third season; this compact little weapon was the one she carried in "The Dweller in the Depths.") Even her color scheme seems to be directly borrowed from the PVC figure, which rendered her in pink and white (Arcee was pink with grey in the cartoon).

She's racing forward into battle in a fairly dynamic action pose; she has three points of articulation (both shoulders and her head), but the usefulness of these joints is somewhat limited, since she's either running while looking straight ahead, or running while being distracted by some hot young Autobot with flames on his chest. As with a lot of characters who are standing on one leg (Starscream, Cheetor, et al.), a platform base was included to help her balance properly. In this case, she's jaunting across an irregular-shaped polygonal silver panel which I'm sure is supposed to represent a chunk of planet Cybertron, with a cloud of blue and green energy blasts licking her heels. Actually, if we assume this is Decepticon laser fire, the angle of the blasts suggests she's actually running away from her attackers rather than bravely marching into the fray. Hmm. Well, she's a girl, so I guess we can't expect her to be too courageous, right? Sigh.

Like a lot of Robot Heroes toys, Arcee suffers a little from lack of paint applications (she really does need some pink paint on her face to differentiate it from her helmet; as it happens, her entire head is ghostly white except for her two enormous blue eyes). By far the very best thing about this toy, though, is the fact that—unlike the PVC figure—her shoulder pads don't spontaneously pop off when you look at her funny. 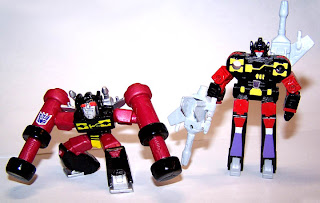 Arcee is inexplicably paired with Rumble, a character with whom she never appeared in the same scene, let alone have any actual interaction with (they do both appear at separate times in "Five Faces of Darkness," but that's about as close as it gets). One wonders if they're suggesting that tiny little Rumble would be a close match in physical combat for the weak and female Arcee, but I'll give them the benefit of the doubt. Typically, Hasbro tends to pair together one popular, mainstream character and one second-tier, lesser-known character together, mainly because two obscure characters packaged together is practically a guaranteed sales flop. (This is why they didn't go the obvious route and pair up Optimus Prime with Megatron, for instance.) That said, this set should have been an instant pegwarmer, what with one lesser-known Autobot (and a female at that!) and a second-string Decepticon (Rumble just doesn't have the star power of, say, Starscream or Soundwave). Somebody at Hasbro must have known what they were doing, though, since this set consistently sells very well—it's the Beast Wars Robot Heroes who are the real pegwarmers, truth be told. (Pictured: the G1 Rumble toy that I've repainted into Frenzy's cartoon color scheme.)

Speaking of Hasbro, it seems that they're steadfastly and stubbornly grinding their heels into the dirt with regards to the whole Rumble and Frenzy mess. Despite the fact that Hasbro originally assigned the red-and-black color scheme to Rumble and the blue color scheme to Frenzy, their colors were inadvertently swapped for animation (with Rumble somehow ending up purple in the process). So powerful was the effect of the media experience of the cartoon on the impressionable minds of the target audience that many fans assumed that it was really Hasbro, the toy manufacturer, that had somehow gotten the names of the characters wrong. Subsequent versions of the characters have been reasonably consistent with Hasbro's original vision; the red-and-black Alternators toy was also named Rumble, as is the Robot Heroes toy. Ironically—of the two cassettes to pay tribute to—Hasbro seems to be focusing predominantly on Rumble these days. This in itself is interesting, since Frenzy had a far longer shelf life, and was the only Transformers toy in history to be available at retail for four consecutive years (the Frenzy/Laserbeak 2-pack was sold from 1984-85, and the Frenzy/Ratbat set was in stores for 1986-87). Presumably, Hasbro's paying more attention to Rumble lately due to his prominence in the cartoon (Frenzy had far fewer appearances and wasn't even introduced until midway through the first season), despite the fact that none of the recent Rumble toys actually look like Rumble as he appeared on TV.

As was done with the Alternators toy, the decision was made to give Rumble his trademark pile driver arms, a gimmick he used in the cartoon on a regular basis, despite not actually being a function of the original Hasbro toy. The piledrivers aren't actually pointed towards the ground, suggesting that he's either about to do some serious property damage or he's just finished up—or, perhaps, that he's about to turn his special ability on one of the Autobots. As is typical of the Robot Heroes figures, he's got a big, goofy grin plastered on his face; while this was decidedly out of character for the likes of Ultra Magnus or Perceptor, it works perfectly on this obnoxious little street punk. The only thing about the sculpt that I dislike is the fact that his back-mounted weapons interfere a little with the movement of his piledriver arms; the wings on the guns bend a little when I rotate his arms around.

The shade of red they used for Rumble is a dark burgundy, which matches the Alternators toy, but a brighter, more basic red would have been more in line with the color scheme used in the cartoon and on the original toy. Lately they've been leaning toward gigantic tampographed faction insignias instead of smaller ones that would actually fit in the right spot on their bodies, so instead of having a Decepticon symbol on his chest, he's got one that's nearly as big as his head on one of his piledrivers. He could have used a few more paint applications on his legs, but aside from that he's a solid, good-looking figure. The mold also has enormous and obvious redeco potential; pictured here along with Rumble is my version of Robot Heroes Frenzy.
Posted by Zobovor at 7:37 PM

I got these both as well. Arcee's face sculpt lacks some appeal. She looks a bit manly in the face. : ( Not robosexy enough. The pose is great, love the chrome gun and Cybertronian base. And I agree that the solid white coloring is a bit week.

Love Rumble but find his massive scale to be a bit out of whack with the rest. i know they're all off scale - but why should he be so damn big? I know, I know, it's the Earth pounding things on his arms...

You're totally right about the scale issue, monkeytoad. Actually, after the last time you mentioned the size problems, I went and had a look at some of the Star Wars Galactic Heroes, and some of those are positively GIGANTIC compared to the Robot Heroes. Darth Vader, Chewbacca, Momaw Nadon ("Hammerhead")... they're enormous! Some sort of effort really should have been made with the Robot Heroes to more accurately depict the relative heights of these guys. There's no reason for Rumble to be taller than Soundwave (unless you're watching "Five Faces of Darkness," of course).