Rock and Roll-Out! is the fourteenth issue of the US Marvel G1 Transformers series. Bob Budiansky, writer extraordinaire, provided not just the script but also the cover. Don Perlin drew the book, with Al Gordon inks, Nel Yomtov coloring and Janice Chiang letters.

The cover is solid, but not particularly inspired. Hoist stands on a stage next to a band, trying to keep some collapsing scaffolding from crushing the entertainers. A seeker (impossible to tell which one, it's not colored in) fires a missile that just barely misses the Autobot, though it sure looks like it's going to plow into the audience members. Hoist's contra posture is a bit odd, though, and really at this point we don't have much reason to care about him. We've never seen him before, remember. Overall it's representative of the book and actiony enough, but doesn't entice me to open the book.

Fortunately, the first page is much more arresting. A nice splash page of Jetfire getting branded by a futuristic machine opens the book. Perlin doesn't QUITE make Jetfire's face show pride, but certainly his posture conveys that this is something he's doing willingly. 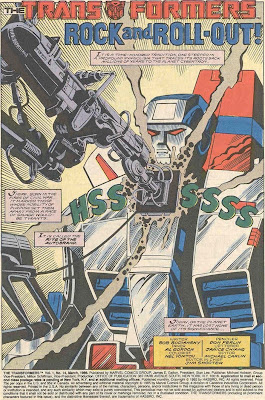 Bob's prose here is terrific, vaguely alien but full of nobility and ritual. Gordon's inks give nice contrast, while Chiang's letters help sell the action. Overall the whole team really pulled together a very nice page. And the action continues, for Jetfire is now an Autobot, having undergone the Rite of the Autobrand. He tries to pledge himself eternally to Optimus Prime, who demurs. He serves because the other Autobots so choose, and would step down if that is what they desired. Jetfire then commingles his fuel with that of his fellow Autobots, not unlike the pact that Ratchet and Megatron shared back in #7. The enormous flying jet is now, formally, an Autobot, and there was much rejoicing. Incidentally, the branding imagery would be revisited, though from a much more sinister side, in the Transformers Animated episode A Bridge Too Close.

Shrewdly, Bob takes advantage of Jetfire's naivete (he's only just recently been granted life by the Creation Matrix, after all) to have him illicit some exposition from Optimus Prime. Ratchet is busy attempting to fix the many Autobots who were injured in the first 12 issues, though with limited success. There just aren't enough spare parts to go around. Wheeljack, though, has had more luck in the Mind Bank. It seems that five Autobots allowed their minds to be backed up to crystals before the Ark took off, four million years ago.

So, Teletraan I constructed bodies for Skids, Grapple, Hoist, Smokescreen and Tracks, who are once again brought to life. The ever-plucky Bumblebee has been tasked with acclimating them to Earth, all except Grapple who's architectural expertise is needed by Prime, so off they go! This issue, more than most that we've yet seen, seems to suffer for being a marketing vehicle. It's hard to believe that Ratchet can't get spare parts, yet the Ark could build five brand-new bodies. Grapple getting pulled aside is a nice bit of continuity that will pay off in #19. Oh, and note the devices that transfer the mind-engrams into the waiting bodies . . . looks oddly like Prime's gun, no?

Elsewhere, an un-mustachioed GB. Blackrock stands on the deck of an aircraft carrier, #65. Note to naval buffs - that would make this The Enterprise. The US Navy has blockaded the Oil Rig that was conquered back in #6. They don't want to engage the Decepticons for risk of catastrophic environmental damage, so they opt for containment instead. Starscream is getting fed up with being seemingly abandoned by Shockwave and attempts to seize command, though the other seekers don't seem to care much about who commands when they're trapped. Shockwave, though, has other plans. His defeat at the end of #12 behind him, he's constructed an energy siphon that will allow enormous amounts of energy to be stored in compact form as energon cubes. He effortlessly bypasses the blockade to collect the fuel, and his warriors, then blinds the responding American fighters scrambling to engage the Decepticons by blowing up a single energon cube. The military presence wasn't totally in vain, though. They've overheard the site of the next Decepticon attack, a large source of sonic energy. This sequence seems fairly perfunctory, advancing the plot with just a daub of characterization for Starscream. It seems odd that Shockwave is back so quickly - barely any time at all, considering that the last issue had an unclear time frame. We do get to meat intelligence officer Barnett, who isn't interesting yet but will play a big role in several future stories. Revisiting the oil rig does recall Circuit Breaker, as this is the site of her accident. With three Decepticons just sitting here for weeks, you'd think she'd have struck.

Back to Bumblebee and his crew, Bob spends a little time exploring the logistics of their situation. To avoid attracting attention, the Autobots are switching to inter-Autobot radio. Further, they are using mannequins to simulate drivers. Finally, they are seen filling up their tanks at a Blackrock gas station, per the agreement that Jazz brokered with Mr. Blackrock in #9. The new Autobots are are still not quite getting the concept of humans as sentient and cars as tools, which makes for some fun dialogue. They do learn about a concert that evening, Brick Springstern (or is it Springhorn?), so when Optimus Prime informs them that there may be a Decepticon operation to steal sonic energy they connect the dots. I really enjoyed delving into the mechanics of how the Autobots are getting fuel and remaining incognito. It's odd that in the relatively economical space allowed by a comic, he visited this topic FAR more often than the contemporary cartoon ever did. The 84 and 85 characters got something like 20 issues before they started to get eclipsed by the 86 assortments, vs the 65 television episodes devoted to the same. It's probably a testament to the more mature sensibilities of the comic book medium.

Back to Barnett, it seems that the US government is getting fairly worried about the panic that the Autobot/Decepticon conflict is likely to cause. He's given orders to figure out a way, if not to control the situation, at least to explain it away with a plausible cover story, setting up the next issue.

And finally, the Autobots arrive at the concert. After a slight misunderstanding over parking fees (and continued confusion over why cars aren't allowed inside), they settle in to enjoy the show. For a while they do, until the sound starts to become muffled. Sure enough, it's the Decepticon's siphon. Rather than wait for back-up, as ordered, they severed the siphon and allowed the show to continue. This may have been a bit rash, though, as it prompts the seekers to burst forth from the ground. Fantastic lettering by Chiang here, look at the way the KRAKK is partially transparent. She didn't do that with Photoshop, folks. With little choice, the Autobots fight back, though Bumblebee falls into the rubble and finds himself face to face with Shockwave. The audience, improbably, thinks this is all part of the show.

It turns out that snapping the cable fused the siphon into worthless junk. Shockwave, acting a bit out of character, opts not to engage Bumblebee. Rather, he leaves the diminutive Autobot alone with all of the energon cubes and flies off to murder the 80,000 humans gathered for the concert. Given that he chastised Megatron for similar behavior back in #5, I don't find this particularly believable, though I suppose it is quite chilling. Perhaps if he'd explained that it was part of a ploy or something, I'd accept it more. Bumblebee proves resourceful, hurling a cube directly in front of Shockwave's barrel and causing an enormous backfire, blasting Shockwave miles away. The other Decpeticons, pummeled by their adversaries, 'pathetically follow their helpless leader.' The humans are starting to get restless by now, so Bumblebee and the Autobots beat a hasty retreat. They encounter Prime, Bluestreak, Wheeljack and Mirage, who demand an explanation. Optimus accepts that Bumblebee probably had a good reason for going against orders, so opts not to take further action. After all, the show must go on.

I find this a somewhat unsatisfying issue. This is the first time when the demands of Hasbro to introduce new characters really seemed to negatively impact the story. Of course, it will get MUCH worse before it gets better. The story isn't particularly inspired, and the theme of the issue 'the show must go on' isn't explored as thoroughly as it might have been. That said, I find the fish-out-of-water notions to be interesting ideas, and the Rite of the Autobrand is just a great image. I will also admit that the idea of Transformers backing up their minds somewhat intriguing. Of course, this predates the concept of Sparks by a good decade, but it's fascinating to think that maybe out in the universe somewhere there is another Tracks or Skids running around, four million years wiser. Oddly absent from this issue are Inferno and Red Alert.

Rock and Roll-Out! is available from IDW Publishing in this anthology: Classic Transformers Volume 1 (Transformers)

It's odd that in the relatively economical space allowed by a comic, he visited this topic FAR more often than the contemporary cartoon ever did.

A fair question. I'm afraid that section was a victim of editing. I was talking about the topic of day-to-day Autobot logistics. I've tweaked the review to make that clearer.

This issue is kind of special to me because it was (along with issue #9) the only issue I owned for a long time. I really got a kick out of the naivety of the new Autobots, even if I thought the Decepticons stealing rock-music energy was a patently absurd idea.

I'm sure it was enormously difficult for Budiansky to come up with plausible and interesting ways of introducing new characters. The cartoon just pretended that all the 1985 toys were there all along, but at least the comic made some effort to explain where these guys came from.

I agree that this was a lackluster issue——not just because Hasbro had a new batch of toys that needed to be advertised, though. Budiansky has always favored the human aspect to his Transformers stories, and apparently he really liked the idea of a "Autobots meet Bruce Springsteen" story (or the closest Marvel satirical equivalent), but I think it failed to work on so many levels. Bumblebee driving the new recruits around and teaching them about life on Earth would have been a fun story in and of itself, without the heavy-handed Decepticons-stealing-rock-music plot.

I almost wonder if Inferno and Red Alert weren't deliberately left out of this story in favor of some "fire rescue" story Bob may have had cooking up in the back of his mind. (It's odd that Inferno and Red Alert never got a proper introduction in the U.S. comic. Red Alert's first comics appearance was in G.I. JOE AND THE TRANSFORMERS——and that was almost assuredly a mistake!)