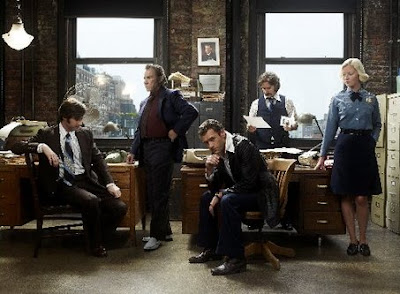 It's a slightly sad day for television viewers. ABC's Life on Mars has been canceled. Maybe it will instead find its way mysteriously back to the early 70s instead?

For those of you unfamiliar with the show, it's an American remake of a popular British drama by the same name. The British version starred John Simm, perhaps better known to readers of this blog as The Master from Doctor Who's 3rd season finale. The premise is surprisingly simple - a New York cop from 2008 is hit by a car and finds himself back in 1973. He has a ready-made life there, the 125 precinct was expecting him to transfer in.

It's not exactly clear how or why he's back there. He jots down a number of theories on a blackboard; coma, time travel, drug trip, aliens, scientific experiments, afterlife, different dimension, virtual reality, insanity, brain tumor and a big question mark. Many of these are touched on here and there, but that's not really to focus of the story. It's far more a period-piece police drama than it is a science fiction show, but having a modern protagonist allows the writers to really look at the 70s from an outside perspective.

The one good thing about its cancelation is it means that the producers can wrap up the show early, while it's still intriguing. I can see how five or six years of this would really drag if the writers weren't REALLY on the ball. Still, I suggest that you check the show out. There are four more episodes yet to air, and ABC has a few more back-episodes online.
Posted by Jimtron at 1:05 PM

Email ThisBlogThis!Share to TwitterShare to FacebookShare to Pinterest
Labels: canceled, life on mars

Sorry to hear. I watched one episode and thought it was interesting. Go see Watchmen and get your geek on! It's pretty fantastic.