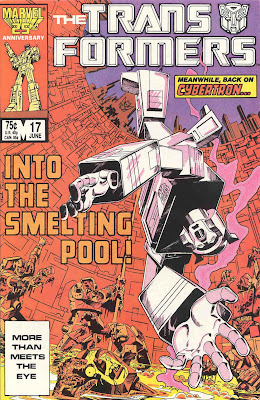 The Smelting Pool! is the seventeenth issue of the US G1 Marvel comics run on Transformers. Bob Budiansky returns to writing duties after his one-issue break, as does the rest of the creative staff from issue #15. That would be Don Perlin pencils, supported by Keith Williams inks and Nel Yomtov coloring. Janice Chiang letters Bob's words and sound effects. Herb Trimpe drew the cover.

Overall it's quite a nice cover. Blaster plunges head-first into a bubbling pool, filled with Transformers in various states of decomposition. Up high, a few shadowy figures look on under a Decepticon banner. "Meanwhile, back on Cybertron... into the smelting pool!" it tells us, and for once the words are quite necessary. After all, we don't know this Autobot from Alpha Trion, but letting us know right away that this is a different planet helps contextualize the image. Also, we haven't seen Cybertron since issue 1, so the promise of more is intriguing. Yomtov colored blaster mostly white and pink, and set the rest of the image in reds and yellows. The contrast between the cool colors and the warm colors was a good choice. The pool looks suitably deadly, and of course the idea of the hero falling into a deadly pool (acid, lava, snakes, whatever) is a pretty classic adventure trope. 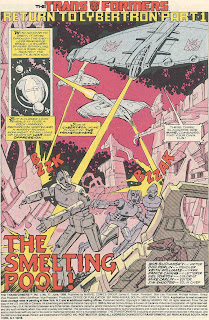 The issue itself lives up to the potential of the cover. Right from the first page, we're promised a big adventure. The first words of the issue inform us that this is Return to Cybertron Part 1, already guarantee us a multi-part story. The opening splash isn't quite, since Perlin sneaks in an establishing shot in the upper left corner, embedded in the rest of the image. Bob's prose jumps quickly from regal to bleak in his narration, and the rest of the image goes heavy on the bleak. Decepticon war machines hunt civilians, who look suitably pathetic. The black and purple sky and devastated metallic buildings help pull us into the desolate sphere that is the homeworld to the Transformers.

As the issue progresses, we get into the story. The Decepticons see these wasted neutrals, called Empties, as an unnecessary drain on the planet's dwindling resources, and so harvest them for spare parts. Enter the Autobot anti-hero, Blaster. He's waiting for someone called Scrounge, a malfunctioning glitch of an Autobot who is late for their rendezvous. Upon seeing the Decepticon attack on an Empty, he reluctantly steps in and save the day. However, when the Empty tries to thank him, he brushes him off, having no time for the 'rusty hides of robo-wretches.' In a mere three pages, Bob manages to establish Blaster as a bad-ass fighter who will reluctantly do the right things. For the rest of Bob's run, Blaster would continue shine as one of the more interesting characters. I find this interpertation to be much more compelling than the wisecracking goofball that the Sunbow cartoon gave us.

Meanwhile, another new character is getting some good characterization: Scrounge. Of course, Scrounge is not a toy character, but there is a decent chance that a kid reading this issue back in 1986 wouldn't know that. Scrounge transforms to a very alien vehicle, a single mobile wheel. He's also got a special spy arm, with wire-guided audio and video receptors built into his fingers. It seems that he's been tracking a missing neutralist scientist who specializes in interdimensional engineering, and his investigation has taken him to Darkmount, the Decepticon's local stronghold. It is especially important to him that he find the scientist, because he wants to be viewed as a worthy member of the Autobot team. He manages to overhear and record a coded transmission, one that Decepticon Shrapnel seems to think is extremely important. In his eagerness to retreat, though, he trips an alarm. He gets captured, but not before radioing Blaster that he has profoundly important intelligence.

Blaster is disturbed by Scrounge's absence. He heads back to the Aubobase to get a search party going, though commander Perceptor doesn't think it's worth it. When Blaster decides to go anyway, the minibots rally around him, and so Perceptor bows to the inevitable and sanctions the search. It's an awkward scene, partially because I have a hard time envisioning Perceptor in the role of a resistance leader. One nice aspect - the Decepticon fortress is massive and out in the open, but the Autobot headquarters is cramped and hidden.

And speaking of the Decepticon fortress, page 9 is a beautiful splash page of the interior of said fortress. For the first time, we're shown the smelting pool, a horrific place where empties are melted alive. Perlin's art is fantastically brutal, and Budiansky's words play up the horror. Scrounge doesn't end up here yet, though, since he is first to be interrogated by Decepticon leader Straxus. It doesn't take long for Straxus, lord high governor of Polyhex and comic-original character, to decide that whatever Scrounge knows won't matter after he's dead. And thus, Scrounge is sentenced to die in the pools, though not before Straxus rips off his special arm. One really feels for the little Autobot, losing the one thing that he had any pride in.

When the Autobots discover where Scrounge is, they all decide to give up. All except Blaster, that is. He grabs his electro-disruptor and marches right into Darkmount. It doesn't take him long to get cornered, but before he is pushed into the pit, Sharpnel again decides that Straxus must see this Autobot. Straxus, who's busy supervising some sort of vast construction project (great art again by Perlin), is getting tired of the constant interruptions, and knocks Shrapnel aside. Blaster is quickly thrown into the pit . . . which is what he wanted all along. He locates Scrounge, and pulls him out, but the poor little guy has mostly melted away. He insists that Blaster take the data he's recorded before wriggling free of his would-be savior's grip. Blaster helplessly watches his friend go under, before exiting the pool with the help of Powerglide and the other minibots, who didn't abandon him after all. 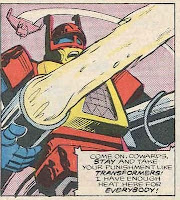 The story isn't quite over. There is the obligatory fight scene as the Autobots escape. While at first I was a bit bored of this, since Scrounge's death was the real emotional climax of the issue, the fight serves to showcase Blaster's grief. He pulls out some tubing feeding the smelting pit and sprays the Decepticons with molten metal, driving them off. Even after he drives them off he continues to impotently spray the deadly liquid into the air, shouting at his retreating adversaries until Powerglide swoops down and pulls him away. It brings the story back to Scrounge by dealing with Blaster's grief without hitting us over the head with it - extraordinarily well done.

The denouement is brief. The message that Scrounge grabbed was of course Soundwave's transmission from issue #10. The Decepticons are preparing to conquer an energy-rich planet called Earth, but there is an obstacle - a group of Autobots led by Optimus Prime. And thus did Scrounge revitalize the Autobot movement, for not only did he give them facts . . . he gave them hope. The last panel is Blaster silently mourning his friend.

This is one of my favorite Transformers tales. It's set against the backdrop of a dystopian alien landscape, full of bizarre architecture and strange language. Though it took the comic far longer to get back to Cybertron than it took the cartoon, it was well worth the wait. The very first episode after the pilot featured a barren Cybertron, apparently empty of everyone but Shockwave. This Cybertron is a nightmare of hidden Autobot resistance cells, decrepit civilians and arrogant Decepticon overlords. Overall, I find this vision much more compelling.

It's not just the setting, though. It's bittersweet, a tale of sacrifice and friendship and grief and hope. We learn a lot about two Autobots, one who lives, one who dies. That character focus serves the story well, for when we see the horrific results of the Smelting Pool on someone we've come to root for, the real evil of the Decepticons is hammered home. There are also some intriguing plot points, including the missing scientist and the massive (but barely remarked upon) construction project that Straxus is overseeing. The intertwined answer to both of these questions will be offered in the next issue, which is promised to be "The cosmic conclusion of Return to Cybertron -- The Bridge to Nowhere!"

collection, on sale now.
Posted by Jimtron at 9:00 AM

This story is one of my favorites, too. Scrounge and Straxus are extremely well-written for non-toy characters.

Wow, I do remember re-reading THIS issue several times. Great review once again. Your efforts are appreciated.

A supreme slice of comics. My joint favourite TF story in any medium (along with The Bridge to Nowhere). I do recommend people check it out!
-Ralph

Blaster remains one of Budiansky's most well-written Transformers characters, hands down.

One thing I've never quite understood is why Blaster appeared throughout the comic with an alternate head design (looking more like the toy). Marvel obviously had access to the regular character design——it appears on the cover of this very issue, and it pops up now and again when other artists portray the character (during the G.I. JOE AND THE TRANSFORMERS story and some of the late Action Master issues).

My theory is that this is actually Blaster's cybertronic design. Other elements of his robot mode are different, too, like the speakers on his legs and his cassette deck door. I think what was supposed to happen was that Blaster would revert to his normal design once he got to Earth, but for some reason they kept the alternate head design. Maybe they just thought it looked cool, yes?

Yes, this was quite the issue, and my favorite as well. Here we see cybertron not as some desolate tomb but as a battleground of opposed forces with neutrals (civilians) caught in the middle. Nasty and unforgettable.

Interesting point re: Blaster's head design, Zobovor. Had not thought of that.

In Holland we got both parts at once in one bi-monthly comic. One of my absolute favourites, too. I preferred Perlin's artwork when it was inked by Brain Garvey and Ian Akin, but these two issues were very well done.

As for Blaster's head design... it was always something that really irked me. Andrew Wildman and Herb Trimpe always got the cartoon look, Don Perlin, Jose Delbo and Bob Budiansky himself (the Scraplets cover) got the alternate toy model head. I have no idea why they did this, as Blaster's Universe profile was cartoon acurate (obviously, since the basic artwork used for those was Floro Dery's, with inks by Akin and Garvey). I got nothing...

This was one of my favourites as well. It was extremely poignant to see Scrounge die. I know they couldn't kill off any toys, but still seeing this happen to a character that they built up so much was sobering. (Although i guess they could have killed off the Omnibots since they didn't appear anyway. Hey, Dreamwave did that!)