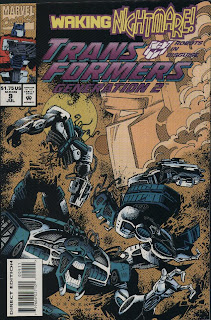 The ninth issue of the US G2 Marvel Comics run of Transformers again contains two tales: Swarm, and Tales of Earth (part 6).  Despite this duality, there is only one creative crew.  Writing is by Simon Furman, pencils by Manny Galan, inks by Jim Amash, colors by Sarra Mossoff, and letters by Richard Starkings with Comicraft.  The cover, as always, is by Derek Yaniger.

The cover is effective, though it's a bit hard to know for sure what's going on till you read the story.  Three of Jhiaxus' G2 Cybertronians are in pieces, perhaps being consumed by the black smoke that whorls around the cover.  Optimus Prime, faded out, is in silhouette.  "Waking NIGHTMARE!" it says, which is actually somewhat shrewd, as we'll come to find.  It's intriguing, and the artwork certainly conveys what it intends to, but I think the subject matter is just a bit abstract.

We open on a familiar scene, Optimus Prime walking among dessicated bodies, indulging in a brooding (or 'bro-ding', as my wife would say it) narration.  "A dream, a vision..." it asks.   Alas, this is the reality he finds himself in.  An Autobot science crew pores over a devastated industrial plant, while the security team looks on impatiently.  Since this isn't the work of Jhiaxus, Megatron wants to move on, and Grimlock agrees, but Optimus is having none of it.  He suspects a connection between this, his visions, and the G2 Cybertronians. The most effective bit here is the misdirection around the dream state.  Furman seemingly realized that he was overusing this trope, and poked a bit of fun at it.  The cover foreshadows this rather effectively.

Elsewhere, Jhiaxus' massive onslaught continue, this time under the command of a sub-commander named Mindset.  He's systematically and dispassionately eliminating the local life, but the arrival of the Swarm brings all of that to an end.  We get many pages of action as the Cybertonians make a futile last stand, exciting stuff and it puts the cover in the proper context.  When the swarm gets to Mindset, it pauses for a moment and imitates him.  It senses familiarity in this being, though that doesn't save the Decepticon from being absorbed.  Half a galaxy away, Onslaught reacts as his presumed offspring is consumed.  Optimus Prime feels it too, that a turning point has been reached. 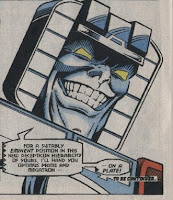 Swarm has one more dramatic beat left, though.  Jhiaxus surveys the wreckage of his crew on Ethos, handed to him last issue by Megatron's timely (or untimely, depending on perspective) arrival.  A figure arrives, but Jhiaxus stays his men.  He knows this one... it's Starscream.  The miscreant is looking to switch sides!  (Galan manages to capture Starscream's evil sneer perfectly here.)

The last stand of the native is a nice moment.  Though he's outmatched, his courageous stand provokes sympathy from the reader but contempt from his opponents.  One cannot help but draw connection with the similarly futile stand the Cybertronians would make scant pages later and feel that justice has been served.


The moment with Onslaught, though, is iffier.  It's not exactly stated, but it was heavily implied that the Combaticons were made on Earth just before issue #25.  With so many hundreds of Decepticons to choose from, why Onslaught?   I do like the visual similarities between him and Mindset, though.

The final twist of the first tale of the book was a bit telegraphed.  After all, with Starscream missing last issue, where else would he go?  I think that it might have been more effective to leave this meeting undepicted.  We'd have gotten the picture, I think.

It's not over yet, though, we still have Tales of Earth!  Back at the Autobase, Perceptor educates the assembled 'Bots and 'Cons as to what they've found.  The residue from the destroyed world, J'Asik, shares  a 'genetic sequence and celluar configuration' with that of the Transformers.  I think it's a bit odd to think of the Transformers as having a genetic code, but I suppose the budding idea already introduced biological analogs to the mythology.  I absolutely love the panel I excerpted here, by the way.  Galan's abstract prime looks so down, yet it's such a simple rendering.  Well done.

Optimus fills Megatron in on his visions, connecting the dots for him (and the audience.)  They face not just the unchecked growth and accompanying amorality of the G2 Cybertronians, but also this monstrous outgrowth of their race.  However, they have no time to dwell on this... Jhiaxus has found them!

The full might, one presumes, of this far superior foe is now free to rain down on the assembled Autobot/Decepticon forces.  It's a great ending, though perhaps telegraphed a bit too much by Starscream's defection at the end of the main story.  It's a bit sad to have no Yaniger artwork.  Galan still seems to struggle with the style.  Though he has some nice moments, on the whole the imagery still seems a bit awkward and uncomfortable.

We now have three issues to go and the big confrontation has seemingly arrived already.  One has to wonder a bit where we go from here.  Three issues of Jhiaxus versus our guys?  Retreat and counterattack?  The story has certainly become exciting, and I look forward to seeing it climax.  This issue is reprinted in its entirety and available for purchase in  Transformers Rage in Heaven  from Titan publishing.
Posted by Jimtron at 12:02 PM

The parallel between the two last stands seems to actually be reinforced by the cover; the Cybertronians getting consumed don't look like any inside the book, but like TF versions of the beast men! Yaniger's interesting take? Or a f*@%-up with the model sheets? Whichever, it's odd in a good way.

And speaking of creative artistic choices, I'm surprised you didn't mention Galan's most famous Easter Egg: the splash page of corpses includes the remains of Tom Servo and Crow T. Robot! Given what we learn about the Swarm later on, it seems odd that it didn't acquire a compulsion to seek out and devour the worst movie ever made. Maybe they were actually the bodies of one of Tom's clones and Timmy.

And Mindset: I wasn't sure exactly what the Onslaught parallel was supposed to imply. OP said their creation was an exact science, so I figured it was more to do with the timing or generational parity of one's Matrix creation vs. the other's spawning. Has Furman ever explained where he'd have gone with that "deeper bonds" deal?

All I know is it inspired me to repaint a team of Machine Robot space shuttle KOs from Big Lots into the Cybertronian Aerialbots, though I can't say what their origin story is either. If Mindset was leader of his own gestalt team too, think maybe they'd combine a bit like, say, Energon Bruticus?

As for a Mindset toy, well who'd a' thunk he'd actually get an official one before cartoon-favorite-obscure-with-plausible-transformation Devcon? Sure it's not an accurate representation of the REAL Mindset, and it's an Autobot fer Primus' sake, but it's awesome! He always seemed the most toyetic of all these green guys, yet I've never seen a kitbash of him. He looks so much like a Cybertronian Snow Cat or VAMP that it seems like that'd be a good place to start, but aside from the 4-missile launcher, they wouldn't actually have workable parts.

And for background stuff, comic die-hards were thrilled to see Nightbeat amongst the science teams, so another nice touch by Manny. He may have offset that with Megatron at the beginning atill sporting that battle damage to his face from issue #7...except the end of last issue showed all his injuries repaired by the time he arrived at that planet to help the Autobots! D'oh!

Or if I want to win the No-Prize...some of those chemical weapons the Cybertronians used against the 'Cons contained a time-release virus that mimics symptoms of extreme gingivitis! Nailed it! Now bring on 'Alignment', and I'll rationalize it into continuity so fast it'll croquet 'Beast Machines' off the other end of 'Beast Wars' and all the way back to the Power Lords' planet where it belongs.

On a less polarizing controversy, this is the first mention of "Thunderjets", yes? Is it generally accepted that those guys could only transform into half a jet, or were they more like Darkwing and Dreadwind? I customized some of them too, out of those giant KO Star/Energon Saber Mincons. There was a big Wreckage that looks a LOT like Mindset's alt mode too...but he's too damn flimsy. I'm buyin' that repainted VAMP in the Captain America line though, just so I can use that missile launcher, someday...

hey I just bought your transformers animated all-spark almanac and found the address that led me here. This request has been sitting in my mind for a while now, as I'm sure other variations of what I'm about to say has and presently still lingers about in the heads of many devastated fans;

why did you allow transformers: animated to end?? I'm bummed, man, and if you think I'll get over it, well, it's been how long since the last ep aired? So many loose ends man.

it was a great show. A lot of interesting stories and plots... I'm not sure what role you all played in the making of the show, but I'm not really sure where else to put this.

I want more of this kind of transformers show! Cute, cartoony robots with relatable, cuddly personalities. And so do a million other people. Thank you.

Hey there, Anonymous and Anonymous!

Anonymous 1: Interesting observation about the cover. I hadn't noticed that, but you may be on to something. As for the easter eggs, I kind of meant to. I even cut out their images to upload, but then forgot. Thanks for bringing it up.

Anonymous 2: I only made the books, I wasn't involved in the production of the show. I can say that just about everyone involved with the show wanted it to go on. Sadly, the timing never quite worked out right. HOWEVER, you are in luck. THIS VERY WEEKEND, June 2-June 5, in Pasadena, is BotCon, the annual Transformers convention. This year's theme is Animated. There will be new Animated toys, and new Animated comics. I even wrote some of the bios! So, if you're anywhere in the area, maybe you can check it out.

Anonymous 1 has a point, but I think the "mistake" wasn't yaniger's. After all he was the principle artist. I suspect his cover was based on the designs he intended to use but someone else got the chance to put their own spin on the concept.

That said, off model characters in transformers aren't new. Just look at the designs for the Autobots in the original G1 comic. First 6 issues look closer to the toys, but suddenly the TV show character sheets replaced them. Continuity wise this is a real mess, but we TFans are quite forgiving on that score - usually.