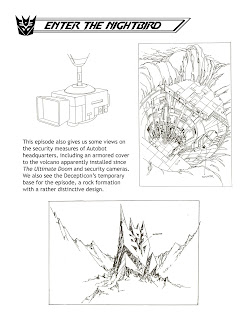 Let's finish up some old business with this week's The Ark Addendum.  While I was working on scanning in the scripts from the Ron Friedman auction, I uploaded some of the models from Enter the Nighbird.  Why not finish it out?


To make the Nightbird's entry into Autobot HQ more impressive, the writers added a cover to the top of the volcano.  It makes sense, Laserbeak flew in and grabbed Sparkplug back in The Ultimate Doom, so why not add in some extra security?  They also added in cameras and motion sensors.  Smart to get rid of the 'open door policy.'  I really wanted to do an extra page on the crashed Autobot HQ in The Complete Ark, and these two images would have gone in there.  What held me back was no really high quality version of the front entrance.  I had a nice shot of the volcano, which I did sneak in, but felt that to not have the main entrance (except for a snowy version) defeated the point.

The real stand-out on this page, though, is probably the Decepticon base, shaped like their sigil.  Floro Dery spoke fondly of designing this, and I have to say he did an outstanding job.
Posted by Jimtron at 4:19 PM

There was always a level of continuing escalation in the series continuity. The episode Auto-Berserk demonstrated more security measures too, not to mention the Movie and episodes after, Metroplex, etc.

Very cool sheet, thank you for posting. Always plenty of reasons to come back to the blog. I think this is as good a place as any to mention a talented artist:

My reason for mentioning him is his work on the well known pan shot of NightBird. He took the original shot and redrew the lines and colors. Almost as good as a model-sheet, at least until the original appears, assuming it ever does.

He did a great job on that, I must say!

Jim,
If I can dare ask..About how far thru are you with the addendums? I own both the Ark and Ark 2 but not the Complete Ark. Is there that much difference between the two? You can contact me at ss4vegeta007@yahoo.com if you prefer. I would of sent this to you directly but something kept popping up that the mail server isnt configured correctly.

I've got quite a few left to go on the Addendums, a good year of material at least. Plus, I'm always looking for more. Who knows, maybe BotCon this year will let me expand my stock.

The Complete Ark fixes a number of niggling errors from The Ark, and inserts about an extra 20 pages of material. The extra material is largely in the Masterforce era, but I do get dribs and drabs added to the US stuff here and there.

In my view, The Complete Ark is the best way to enjoy the material, but if you're budget conscious you've already got 95% of the material in that volume.