Fire On High Part 2 was written by Simon Furman, drawn by Geoff Senior, coloured by Steve White and lettered by Richard Starkings.
The cover is by 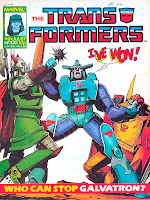 Jeff Anderson and is a great image, somewhat let down by the colouring. The three figures are well-depicted and pretty dynamic. Galvatron in particular looks brilliant, although I would have liked a little more perspective on Death's Head, who is looking a little flat, but that's a minor nitpick. The problem here, however, is that Galvatron is a really strange colour. Admittedly, we should be used to seeing Galvatron in any number of different purple and grey combinations by now but I have no idea at all where the teal has come from and, worse than this, to my eyes, is the unpainted background that gives the cover far too much white space. The intention may have been to emphasise the fact that the scene is just about these three characters but actually it just makes the image much duller than it should be.

Ultra Magnus is dead and Galvatron triumphant. The issue opens with a fantastic splash panel by Geoff Senior with a dynamic angle that really shows off Galvatron's size and power. While ranting to himself he recaps the events of the previous few issues while mentioning that he did not even bother to watch Ultra Magnus' fall into the lava (hmm....). Despite his madness he correctly determines that the time jump trigger is the only thing that can stop him now so he goes to where he has left it and is dismayed to find that it has been taken. The culprit can only be one being - Rodimus Prime!

Meanwhile, Wreck-Gar is still working on the device but it is slow going because the technology is complex and unfamiliar. He is interrupted when Galvatron appears, striding, with purpose towards them. A quick Mexican stand-0ff ensues and both Rodimus and Galvatron go for their weapons. Galvatron is quicker on the draw, of course, because his gun is attach 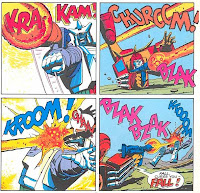 ed to his arm but Rodimus pulls off a athletic diving move and fires back, blasting Galvatron in the face and neck, willing him to "FALL!" - Much the same words as Megatron says to Optimus Prime as he blasts him over and over in Transformers: The Movie. Richard Starkings turns in some great lettering here as well, with energy blasts passing through their own sound-effects.

Despite the hail of energy Galvatron says standing until Rodimus spots a cable that is feeding energy into his volcano siphon. He blasts it and the energy is discharged into Galvatron finally stunning him enough to knock him face-down.

Rodimus moves in to finish him off but Galvatron is no ordinary Transformer. He is up and fighting before Rodimus can even cross the distance between them. Senior's art on his furious expression as we realise he is not even stunned is sublime - a moment straight out of a horror movie.

His fist connects with Rodimus' jaw and starts a beatdown that ends with the Autobot leader facedown in the dirt, the ground cracking with the impact as Galvatron's foot lands on the back of his head.

Rodimus' salvation comes from an unlikely quarter. Death's Head, recovered and ready for battle. He is determined to keep the Autobot alive so that he can be paid once he has finished Galvatron. He has the advantage of surprise but a lucky shot forces him to replace his right hand. Galvatron rallies and is able to grab the bounty hunter's other hand and tear it clean off!

Meanwhile, Goldbug is reviving Rodimus Prime and the time-jump override device is finished. Without wasting any time Wreck-Gar hits the button and the device activates. Death's Head, having finally got the better of Galvatron, is shocked as he is swept away by a torrent of time energy. Goldbug breathes a sigh of relief that proves to be short-lived as although the future Transformers and Death's Head are gone... Galvatron remains!

What an issue! Furman manages to keep the "Galvatron beats everyone up" routine tense and exciting with Wreck-Gar's technical race against time in the background and Death's Head's timely reappearance. The twist at the end is a shocking one and sets up a seemingly impossible confrontation for Goldbug. My only real complaint is that mentioning that Galvatron never saw Ultra Magnus die is something of a sledgehammer. Magnus will presumably come back next issue and I can understand setting it up in advance but really I think Furman could have got away with that without mentioning it this issue. It might be usually the done thing to drop a hint or two of an upcoming plot twist but this was too much.

As good as Furman's writing is, this issue is all action and therefore Geoff Senior's contribution is as, if not more, important. In an obvious contrast to Dan Reed's messy, inky style, Senior's lines are crisp and well-defined. Both use stylisation to give the illusion of movem 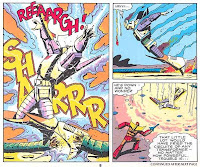 ent but rather than bend the character models to his will Senior elects to render them as cleanly as possible using only the minimum of inked detail, giving no doubt at all as to what is happening in each panel. Steve White's colouring is praiseworthy as well, lending depth to Senior's figures and adding atmospheric shadow and lighting effects. Check out how effective this is in the sequence where Galvatron is stunned by the energy discharge -
This was undoubtedly a fantastic issue and the cliffhanger really upped the ante. Unfortunately even reasonably astute readers can probably see where it is likely to go next, but that doesn't stop the action from being exciting along the way.
Posted by Bishbot at 7:52 PM

I always thought the cover was meh. It was kind of like a poor man's version of Senior's cover for 'Hunters!', which had both superior renders and also vastly superior colors.

have to agree on all the comments re: art in this issue. Senior is always a favourite of mine, NO ONE (except Brian Hitch) can draw Death's Head like Senior. The colours are brilliant and unlike (most) American issues of the time, they are right for each bot, no silly mistakes due to unrealistic deadlines here.

Story wise, it was a cool set up for a much anticipated finale.

In hind sight it is a real shame Senior could not have done the whole story, but that is one of the limitations of a weekly comic.

No where near as seminal as Target:2006 but still a milestone that had implication for the UK comic for years after.

A good point, Eugene, about the earlier Senior cover (and ‘The Good, the Mad and the Ugly’ joke might have been better placed here, since there is a real high-noon shootout).

Good to see Death's Head return, and he gave Galvatron a few solid panels of fighting – although it surely wasn't realistic that he would expect to win with an arm torn off (as noted earlier, his power comes from being clever and dangerous, not unstoppable). Yet his last a shout was at being denied his prey, rather than relief at the interruption (a clash of his relentless hunter characteristic overcoming his usually cool self-reservation, I suppose).

A fun point I remember from the original publication: during the fight Death's Head mentions the 'neural cluster' as ‘the weakest spot on all Transformers’. I imagine this was a throwaway line from Furman, intended to show that Death's Head had done his homework and was within a inch of victory, but it caused quite a stir with many readers, who took it as canon and demanded to know where the neural cluster was placed. On the letters page for a long time after there were guesses as to where it might be (someone even guessed 'everywhere' since Transformers have moving parts). In all honesty, I always thought – from the angle of Death's Head's arm – that it was placed at the back of the neck (and, in hindsight, the name has a 'spinal nerve' connotation) and felt most vindicated when the Grim Grams confirmed it.

please put back up alt2day.com and garbageos.com! I was late getting them so I tried to type it in, but alas, it didn't work. Reaspond to this comment when you think about it