Fire On High (Part 1) was written by Simon Furman, pencilled by Dan Reed, Coloured by Steve White and lettered by Mike Scott.

The cover is by Wi 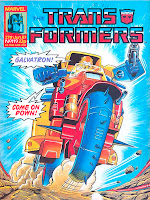 ll Simpson and is... really good actually. The perspective on Wreck-Gar and Goldbug is spot on and look at the detail on the dust and debris churning up from Wreck-Gar's tyres. The speech balloons are annoying, as usual, but at least they depict dialogue from the actual comic. The only possible downside is that Goldbug's legs are, on closer inspection, weirdly far apart and look a little unnatural. Wreck-Gar is very wide for a motorcycle. It doesn't detract much from a punchy and exciting image however.

The Autobots, and Cindy, are holding a council of war. Cindy uses the ever-helpful device of turning Galvatron's plan into a simple analogy that the audience can understand. The volcano device will build up the pressure "Like shaking up a bottle of extremely fizzy liquid." I can't help but think that these millenia old beings with computers for brains would be able to understand in somewhat more complicated terms, and I can't imagine what use a Transformer would have for a bottle of fizzy liquid anyway, but it works to get us up to speed and is a time-honoured science-fiction technqiue.

Galvatron is planning to cause a massive eruption, the one that Cindy and Ultra Magnus lived through earlier was a mere test run and siphon off the energy, transforming him into something akin to a god. That much we knew. What we didn't know, however, was that the effect of this eruption will be to trigger eruptions along the entire Cascade mountain range and to set off earthquakes along faultlines all across the West Coast. The death-toll will be in the millions.

Rodimus is appalled but has no plan beyond a vague suggestion of getting Galvatron back to 2007. Wreck-Gar comes up with something, but Rodimus has no time for his television-themed gibbering until Goldbug interjects and points out that without Wreck-Gar he'd still be lying in pieces. Rodimus gives Wreck-Gar a chance to explain and the scene jumps to...

Ultra Magnus explaining his part in the plan to Cindy. He must face Galvatron once again in order to distract him long enough for his time-jump device to be stolen. Cindy is distraught and angry, pointing out that Galvatron has beaten Ultra Magnus every time they have fought (and she wasn't even there for Target: 2006). Ultra Magnus is prepared to go to his fate but Cindy storms off in tears.

Magnus tries to explain but she is gone and Wreck-Gar gets a lovely moment where he quotes Monty Python's seminal Nudge-Nudge, Wink-Wink sketch. Especially good given that in Transformers: The Movie, Wreck-Gar was voiced by Eric Idle. Ultra Magnus has no time, however, for Wreck-Gar's lewd assertions about Cindy being a "sleek, economy m

Later, Galvatron is hard at work repairing the damage Ultra Magnus has done to his energy siphon, cursing all of the Autobots by name. He is interrupted by a shout and sees Goldbug riding up the slope of the volcano astride Wreck-Gar (mercifully in motorcycle mode). He manages to get in a couple of good shots that throw the future Decepticon off-balance as Wreck-Gar rams him and transforms, throwing his axe at Galvatron's head.

His work done, Goldbug leaps from the mountain and sends Kup and Blurr to carry on the assault. Galvatron is in full fighting rage now, his face contorted and his eyes blazing with energy. His particle cannon spits energy and once again Kup and Blurr are disabled. Goldbug leaps aside to narrowly escape the same fate.

Galvatron turns to find Ultra Magnus calling him out for a fair fight. As he keeps up the tough-talk, knowing all the while that this will almost certainly be the end of him Rodimus and Wreck-Gar work furiously to rewire Galvatron's time-jump device.

Blinded by fury, Galvatron takes a titanic leap at Ultra Magnus and after a couple of swift punches, throws him headlong and screaming into the crater of the volcano...

Obviously the shocking end of this issue is its high-point and its most dramatically successful moment. Furman does well to avoid the convention here and offs Ultra Magnus without much ceremony. We have seen so many desperate battle 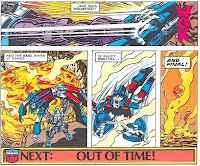 s for survival, dramatic last stands and final sacrifices that it is actually far more powerful, if sobering, to be shown that sometimes, you just won't be good, strong or fast enough. Sometimes being overmatched means just that. The reason Ultra Magnus has fought Galvatron so many times is because he cannot beat him and maybe he never will.

I admit that it's almost inconceivable that Ultra Magnus will not return at some point but this is serialised story-telling and it's up to the writer to sell each moment as it comes, not to hedge their bets. We, the audience, might become cynical about these things, but if the writers start letting us know that they're in on the joke, then the whole medium threatens to fall apart. Ultra Magnus is, for all intents and purposes, dead, and it's a good, shocking death.

The rest of the issue, with the Autobots using strategy to keep Galvatron off-balance is exciting and varied. This, combined with Magnus' surprisingly rapid defeat goes a long to keep the action from becoming repetitive. We have seen knock-down, drag-out battles with Galvatron

several times before and we know how powerful he is. Furman has definitely picked the right time to move from the characters wondering how Galvatron can possibly be defeated to them actually enacting a plan to do just that. The difference is perhaps subtle as the carnage is still extreme, but there is definitely a sense that the end is approaching.

Dan Reed's art, which is sometimes pretty great, unfortunately lets this issue down a bit. I am not as big a detractor from his "wobbly Transformers" as some fans, (I mean, he pencilled City Of Fear so he's always going to get some love from me) but there is a certain slapdash nature to his work this time, starting, disastrously, with Rodimus Prime being given a Decepticon badge on the opening page. Steve White at least coloured it red, but the damage is done. Not only does Reed enjoy drawing organic looking robots, he also always gives them weirdly stubby guns, almost funnel-like at times, and renders their weapons-fire in thick multi-shaded streams of energy. It's not a look I mind as such, it's just very different from everyone else's take on the Transformers and it feels especially jarring in the middle of a long arc like this one. He has had one other issue in this arc, and in general the art has been all over the place, due to the weekly schedule, but Reed's work stands out the most and at times appears rather too busy with unncessary lines all over the place.
Posted by Bishbot at 10:24 AM

I might have believed that Magnus falling into the volcano being a dramatic climax if we hadn't already seen in the cartoon that G1 transformers (Beast Wars era characters that haven't been Transmetalized not withstanding) can survive lava without a scratch.

Cross referencing from different universe plain doesn't really work here. I mean, in Beast Wars, Dinobot dies from standing in the open and taking a few more or elss non-threatening on G1 blasts, doesn't mean we don't feel worried for him because every other TF in other series can take it

By the way, we had some sort of weird snafu on blogspot that ate the original posts. If you don't see your comment here, it's not because we deleted it, it's because we had to repost this review. Sorry 'bout that.

@Werezilla
"can survive lava without a scratch."

Weeeell... not exactly. Look what happened to Mixmaster and Galvatron. :3

Which makes Dinobot a wuss when compared to... Waspinator. :P