Bish's Review Space: Above and Beyond Episode 9: Choice Or Chance

"I caused the deaths of innocent beings" - Wang

Choice Or Chance was w

ritten by Glen Morgan, James Wong and Doc Johnson. It was directed by Felix Alcala who previously directed Eyes and some very good episodes of Ronald D. Moore's Battlestar Galactica, a show that simply must have been inspired at least in part by Space: Above And Beyond.

The escape pod crashes and McQueen and Hawkes manage to escape into the countryside while the remaining Wildcards are picked up by a group of Silicates. They are taken to a prison-camp where they are subjected to physically and psychological torture. Wang is particular is singled out and eventually breaks, making a recording for the Chigs where he admits to committing war crimes.

Another excellent episode and a good conclusion to the story set up in Hostile Visit. Like last episode, each of the main characters got their time to shine and the various parts are woven together satisfyingly enough that none of the seperate stories drag.

In some ways Choice Or Chance is a completely seperate episode from Hostile Visit in a way that two-part episodes of television rarely are - this explains why it is not simply Hostile Visit Part 2 I suppose. Any episode could have started with the 58th already captured and covered most of the same ground without losing much but it is a logical continuation and the story is set up very neatly.

Dramatically, the meat in this episode is Wang's torture and breakdown and Joel De La Fuente convincingly delivers probably his strongest material in the show so far. His Silicate tormentor, Elroy-El (played by Doug Hutchison) is wonderfully terrifying and grotesque and the scenes between the two of them are grim standouts. I found myself torn between wanting Wang to stay the course and willing him to give in so the pain would stop. There's an interesting nod to Wang's race, which normally, in true science fiction tradition, isn't really commented on:

"This war is being run by a bunch of Harvard white guys."

McQueen and Hawkes are always a good pairing because of their shared identity as In Vitroes and this story brings that to the fore again. The scenes of them stalking Sil 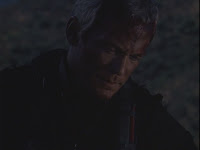 icates and taking them down are exciting but the best scene is undoubtedly one where Hawkes asks McQueen why he fights for natural born humans and McQueen answers:

"I do it so no-one, human or In Vitro, will ever be able to say that all In Vitroes are lazy, or cowards, or don't stand for anything."

Vansen and Damphousse have a rather more pedestrian strand where they are studied by a Chig to see how they react to imprisonment. It provides a few good conversations and a fun jailbreak where they turn a pretend brawl into a real one and kill a few Silicates as well as the the Chig. It's well done and certainly not boring but nothing we haven't seen before.

The conspiracy plot concerning Aerotech continues with this episode as a marine on Sewell's payrole delivers him a box from the penal colony that glows with a sinister red when opened...

The crash of the escape pod is fairly nicely done although the switch from slightly dodgy looking cgi planet to location filming is still extremely jarring. At least it is obviously a real location and not a model or sound stage however.

Unfortunately the fake reunion between West and Kylen lacks the punch it should have. This has been a common theme throughout the series so far: a large chunk of the pilot and the entire second episode were dedicated to West's story but here it feels oddly flat. This is a shame, because we do not necessarily know that this is not Kylen. We have been given no inkling that the Chigs or the Silicates can produce duplicates of people. If this were something like Star Trek, with a technology of the week, then the show would have had to fight against audience scepticism, but as it was we h

ave every reason to believe that this storyline was coming to a close. As it appears though, both the writers and Morgan Weisser seem to be oddly uncommitted. There is a chunk of almost fifteen minutes in the middle of the episode where West does not appear at all, which seems very incongruous for the character first-billed in the credits advancing his major storyline. The problem here is probably deeper than this single episode. For the audience to care about this stuff we really need to care about West and, by extension Kylen, but the it appears the writers are just as disinterested as we are and in recent episodes we haven't had anything approaching the level of emotion necessary to make this work. West searching for his lost love has all the hallmarks of a hook that sounded good on paper but proved less interesting to everyone involved as the series developed.

Not bad, as such, but slightly odd is that Wang now has, arguably, a greater connection to the Silicates than Vansen does. This storyline is a great way of giving the character something of his own to do but the thus far the Silicates have been Vansen's particular nightmare. It will be interesting to see where Vansen's character goes in upcoming episodes, and Wang's, of course.

It is perhaps a slight cheat to bring back the Silicates here with the excuse that the Chigs find it hard to breathe the planet's air. The Silicates are obviously used because they are basically human and therefore can be used for the sort of drama the writers wanted to portray here. It is almost certainly better to keep the Chigs as relatively unknown, for now, though so I will not hold it against them.

Several plot threads to wrap up meant that there was nowhere near as much ruminating on the past as in the previous week's episode. Although the term "history" is stretching it, it is interesting to note that the Chigs (named for fleas) have their own derogatory term for us humans which translates roughly to "red stink creatures" as they find the sight and smell of our blood disgusting.

Wang tries to hold out against the torture by reciting fantasy baseball teams. At least some of them have to be real players.

Production detail on this show is reasonably scarce because it's been rather forgotten but the biggest behind the scenes controversy centres on this episode. In an interview for an article entitled: Formation of ethnic and racial identities: narratives by young Asian-American professionals actor Joel De La Fuente said of this episode:

"Whenever I see Asians in military uniform, I cannot help but recall common images of Asians from the Vietnam War and World War II. They were “yellow-bellied cowards” who took the lives of loyal Americans. They were treacherous and crafty, impossible to gauge. Wang could be seen as all of these stereotypes, I thought."

As a reviewer, and a fan, I find it unfortunate that De La Fuente was unable to take pride in the work he put into this episode. I am open to accusations of naivety here but I really do not think that Wang's race was ever supposed to be the point. As I have noted, Elroy-El does mention it but not in the context of weakness or cowardice. Wang comes across as miserable and broken, certainly not "impossible to gauge" and he does not give in due to treachery but because he cannot take any more. Wang is barely in his right mind when he finally agrees to make the tape; one certainly cannot say that he planned for it to happen or did anything crafty.

What this storyline really does for Wang is to give him something of his own. West already had the Kylen plotline, Hawkes and McQueen have a monopoly on In Vitro dra

ma, Damphousse hasn't got a lot as of this episode but it is possible that giving this storyline to a black female would have raised even stronger questions than De La Fuente had. Wang now joins Vansen as having a special reason to hate the Silicates. His character grows with this episode and, while I do not agree with him, it cannot be said that De La Fuente let his misgivings holding him back from giving a great performance.

A very good episode, minor complaints aside and a great conclusion to the set up of last week, and one that is bound to have repercussions in the stories to come.
Posted by Bishbot at 1:40 AM