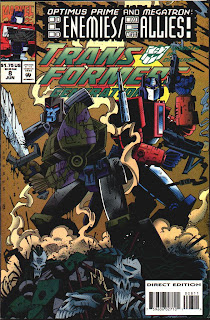 The eighth issue of the US G2 Marvel Comics run of Transformers is, as usual, a two-part tale, though this time the back up story was placed in the middle of the main story. Very strange. Both were written by Simon Furman, with colors by Mossoff and letters by Starkings with O'Neil. The artwork on Escalation!, the main story and not the excellent IDW miniseries of the same name , was by Manny Galan on pencils with Jim Amash on inks. The Tales of Earth (part 5) artwork, pencils and inks, was done by Derek Yaniger, as was the cover.

Yaniger  delivers another excellent cover.  Optimus and Megatron stand, back to back, guns smoking, a sword dripping oil.  They stand amid the wreckage of many G2 Cybertronians.  Powerful stiff.  Megatron's hip looks just a bit off, but that's a pointless nit.  Even the cover text seems somewhat necessary: "Optimus Prime and Megatron: Old Enemies / New Allies!"  Yes, the image shows that, but it's so unlikely that it's worth calling out.  Lovely work. 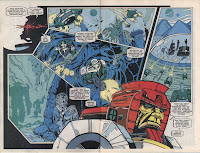 The issue starts off with a middling splash by Galan, Jhiaxus looking wrathful.  Jim Amash's inks definitely give it a certain energy and excitement, but overall it's a bit too static for my taste.  He (Jhiaxus, not Jim Amash) is ranting about how his mercy has emboldened his enemies, and perhaps he's right.  He's had both Optimus and Megatron in his power and let them get away in a futile attempt to bring them into the modern era.  No more, though.  The next page is a rather interesting two-page spread depicting the carnage that his forces are enacting in an effort to draw out Optimus Prime.  Jhiaxus stands in front of it, which works very well.  The coloring helps sell the action here, and the angle on the picture makes him seem contemplative.  Great storytelling, really.  The image of him in the upper right, though very clever, is perhaps a bit redundant.  It's a good three page start to the issue, though, setting the stage for the action to come.

From there we bounce into Tales of Earth, only three pages in.  Optimus and Megatron, both looking worse for wear, start to hammer out the terms of their alliance, with just a bit of interference from Grimlock.  It seems that their alliance is doomed for failure when an alien distress signal lures the Autobots on a mission of mercy, one that Megatron has no interest in.  The Autobots blast off for the frontier, leaving Megatron behind.  Aside from some rather gory Yaniger artwork, like the drool that spews from Megatron's mouth, the most interesting bit comes in at the end.  Starscream suggests that the 'Cons trash the Autobots base while they're off saving the universe, and Megatron dismisses him offhandedly.  Starscream realizes that it's time for him to come up with a real backup plan, and fast, because his time as Megatron's lackey is rapidly drawing to a close.

Thus ends tales from Earth, but the story is far from over.  Escalation continues!  Jhiaxus' troops destroy the peaceful dreamers of Ethos, and Optimus has no choice but to engage.  There's a nice character bit early on where Optimus wrings his hands about the devastation even as Grimlock calmly orders his troops about.  The action is decent, but it's clear that the Autobots have walked into an ambush.  Jhiaxus wanted this confrontation, and he's ready for it.  Help comes from an unexpected quarter, though... The Decepticons ride in to the rally.  (I love Starscream's lack of enthusiasm in response to Thundercracker's rallying cry - "Yeah, yeah. Ra-ra-ra."  Hard to do sarcasm in this format, but it plays well here.)

Optimus is glad that the Decepticons arrived to save their butts, but of course he's worried too.  Despite his lofty speech, it was the brutal edge of the Decepticons that won this battle.  He and Megatron confer aboard the Warworld, attempting to build on the success of this day, when Soundwave shows up with disturbing news.  Starscream is missing!

It's another decent offering, though moving the back-up tale to the middle of the issue feels really strange to me.  I'm not sure just having a different title block makes the changes in artwork any more or less jarring, and clearly Furman feels compelled to keep some portion of each story on Earth.  Leaving that aside, it's a pretty simple story.  Good guys show up, fight, get overwhelmed, and then the cavalry shows up even though they said they wouldn't.  Galan's artwork seems a bit off this time around, which in an action-heavy issue like this is quite a shame.  The brutality of the G2 Cybertronians, though, is a highlight.  Furman's prose does a good job of selling the beauty and wonder of the living computers of Ethos, even if Galan's artwork just shows a bunch of blobby alien creatures.   The real payoff, though, is seeing Autobot and Decepticon fight together.  As well, Starscream's desertion at the end is a nice way to end an otherwise fairly predictable story.

Sadly, this is also the issue where we find out that the series will end at issue 12. Shame.  It took them a while to hit their stride, but they seem to have done so.  This story, while not brilliant, is solid on its own.  In the context of the overall story, it's really quite good, with Optimus and Megatron poised on one side and Jhiaxus on the other, and Starscream a wildcard. At least we get four more issues to finish things out, which is more than the G1 comic got after the axe fell.  Escalation (and Tales of Earth 5, of course) is available for purchase in the out-of-print titan collection,  Transformers Rage in Heaven.
Posted by Jimtron at 11:11 AM

inspired by the wonderful boltax blog i picked up the g2 titan reprints. My initial reaction is that Yaniger is actually pretty cool,galan's work is horrible! I drew better transformers aged ten. I can hardly even bear to read his pages...