BotCon, Original Artwork, and you

So, BotCon is just around the corner and I'm super psyched.  Why wouldn't I be?  This year is celebrating Transformers: Animated, on of my favorite continuities of all time.  Not only that, but it's in Pasadena, a stone's throw away from my North Hollywood domicile.  Yes, good times will be had by all.

Those who regularly read my Transformers comic reviews will no doubt be aware that I'm a big fan of the original artwork behind the comics.  I just love to see the black and white illustrations, love the whole PROCESS of making a comic.  Some of the highlights of my collection are up on Flickr.  (My all-time favorite is the original to Transformers #78.) 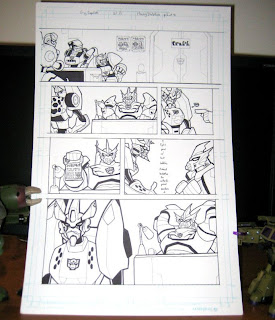 Well, my interest in BotCon and my interest in original artwork intersect today.  Yup, some of the artwork behind Moving Violations, the two-page preview comic for this year's BotCon set, is now up for auction.  It'd drawn by Greg "M Sipher" Sepelak.  I love the feeling that I own a unique piece of history that comes with the collection of original artwork.  Most of mine is splash pages featuring prominent Decepticons, so this isn't QUITE what I normally go after, but it's pretty darned awesome if you ask me.  I love that he drew out the Autobot characters by hand, rather than lettering them in afterwards.  Anyway, be sure to check it out.

The #78 cover is a favorite of mine as well!

Looks like it sold. I DID wind up putting in a bid but did not win. Ah, well, whoever got it will cherish it, I'm sure.