War of the Worlds, the series - The Second Wave script changes

Thanks again to The Sultan of Sarcasm, the biggest War of the Worlds series fan that I know, we have even more script changes.  This time it's The Second Wave, the second season premier.

ANGLE ON THREE OLD-STYLE HUMANOID ALIENS with radiation burns standing in the middle of the hall, terrified.

WIDER ANGLE shows the hall: The Morthren watch impassively. Malzor stands on the stage. The three ADVOCATES stand in front of the stage, facing Malzor. An air of dark ritual. A witnessing of the ultimate punishment.

MALZOR
(to Advocates)
You have failed at your appointed task. The Immortal is with us and his place is not prepared. Your cowardice condemns you. (loud) The Immortal casts you out, you and your warriors. See!

Malzor points, and the Advocates turn to face the first three victims. A tubular device that hangs above the victims surges with gas...glows red...then white...then a beam of energy blazes down to engulf the victims... 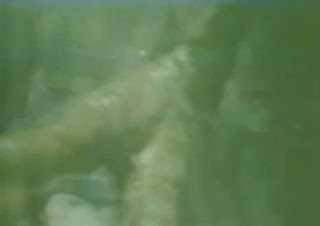 They WAIL...falling to the floor...they arch their bodies as three-fingered hands burst out...grasping for freedom. The energy reaches maximum and clears- leaving only glowing green slime that spreads across the floor and is gone.

Malzor gestures and the next THREE VICTIMS are led in and positioned at the same spot.

MALZOR
The Immortal casts you out!

ANGLE ON Malzor watching as the executions proceed. Mana enters from the back of the stage and stands by Malzor. The lights from the execution play on their faces. Softly...

MANA
A terrible sight. We must all take the warning...

MANA
I'm waiting for the human subject. Two came here and one went free. Now, the Blackwood creature himself has escaped your warriors.

We sense the hostility and rivalry between these two. Malzor glances angrily at Mana.

MALZOR
How do you know this?

MANA
So it's true.

MALZOR
(after a beat)
My plan is more subtle than you think.
Their fatal curiosity will bring me the
one I want...

The light of execution dims, and dark shadows flow over Malzor's face as we...CUT TO....

No cloud and light effects. A quiet night now.

ANGLE ON THE IMMORTAL: Utterly still and radiant. Then the radiance dims a little.

ANGLE ON THE STAGE: The ATTENDANTS move to The Immortal and stand before him, two facing It, one facing the Hall. This one gestures. The moment of arrival is over.

ANGLE ON THE HALL: The Morthren rise, their eyes fixed on the Immortal. Malzor comes forward to the foot of the stage. For all his power, he's like a child before the deity. Uncertain and afraid. 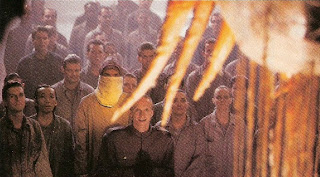 MALZOR
Immortal One: Your subjects greet you after your voyage.

The Immortal's VOICE-MUSIC rises softly. The words are heard as a soft near-whisper that hangs in the air, not directional, seeming to come from everywhere, or like a voice heard in the mind. The voice of a being that has moved beyond emotion and desire. Pure.

IMMORTAL
I was in the void. The void is in me.

MALZOR
Your journey was long...

IMMORTAL
It was long. It was over before it began. Time and space are nothing to me. The only journey is that of the mind as it seeks perfection within itself.

It is clear that Malzor, like all Morthren, doesn't hope to understand most of The Immortal's utterances. He responds as best as he can, while trying to expres his absolute compliance to the deity's wishes.

IMMORTAL
I am Morthrai. Morthrai is eternal. Yet a new Morthrai is created every second. In my mind. As I rise towards the final perfection. Void.

A SIGH of yearning rises briefly from the Morthren at this reference to their highest goal, their heaven: the merging with The Immortal at the moment of death.

MALZOR
It's my only wish...

IMMORTAL
(rising power)
Each has a task. Those who fail will fall from me. Fall through black eternity. Everlasting separation.

As merging is heaven, so separation is hell. A MUTED WAIL rises from the Morthren. The Immortal's radiance starts to waver and dim.

The Immortal is withdrawing from the Gathering Hall. The Morthren prostrate themselves as the stage is engulfed in light. The ATTENANTS move back and are received into the light. The Immortal's VOICE-MUSIC rises then recedes and fades into silence.

ANGLE ON THE HALL: The light sinks to normal. The Morthren stand silently. The stage is now empty. Malzor is shaken, but recovers quickly. He's survived this first encounter. He faces the awed Morthren.


It would seem that each of these changes moves a bit further away from the mythology of season 1.  The first scene emphasizes the triune nature of the aliens, at least the aliens who were the S1 antagonists.  We also learn that two humans came, and one went free.  Presumably this was Max and John Kincaid.  It seems that at one point, they had been to this very facility. For some reason, that got changed in the final script to have Norton detect them.  Probably it was to give the character SOMETHING to do besides die, though it makes the Clone Ironhorse's line about Kincaid being a clown somewhat nonsensical.  Afterall, they weren't chasing his lead, they were chasing one of Norton's.

The second scene emphasizes the nature of the Immortal, living deity of the Morthren.  While I think the name Eternal is probably a better name overall, in the context of S1 the name Immortal tells us exactly what the aliens were fighting for all along.  It's a shame that this got changed.  On the other hand, having the Immortal's words be indecipherable whale-song (Star Trek IV, anyone) probably was a good idea.  It makes it more oracular, and serves to cement Malzor's role as his high priest and chief interpreter.

The photo is by Bruce Macualay, and was originally published in Starlog magazine.
Posted by Jimtron at 3:45 PM

if you're not familiar with it, check out Star Control 2 for the alien race called the Mycon. the dialog for the Eternal here is VERY similar to the Mycon's ramblings... there's also a passing similarity to Kosh from Babylon 5, but it's much much closer to the Mycon. i can't say there's a huge chance that Star Control 2 had any inspirational effect on the script writer, but who knows. surely both writers were inspired by the metaphysical pseudo-religious stuff that's floated around for ages...

the positive effect is that it leaves a lot more open to interpretation by the audience.

but then i could again say this was bad because it allowed far too much leniency on the script writers, as shown in the eventuality of this season's conflicts with even its self! ;-)

thanks for posting this. i remember reading it somewhere before (maybe the To Life Immortal site, which seems to be largely dead now??) but i don't know where to find these scripts any more. do you know an online resource for WOTW scripts?