Review: War of the Worlds, the series ep 25 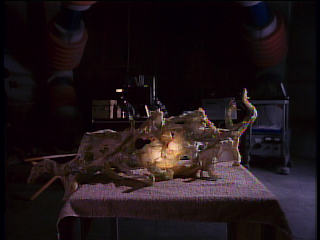 Just as it fell to The Walls of Jericho to establish the feel of a standard episode after The Resurrection introduced the basic premise, so too does No Direction Home lay the groundwork for season two.  It opens with the team, shellshocked, rolling in Kincaid's battlewagon.  He's taking them to a safe house, though there's a bit of action along the way.  Once they get there, they soon learn that the government is cutting the Blackwood Project loose.  Itching to strike back at the enemy, Harrison and John head to the industrial complex that was the alien base, only to find it mostly abandoned.

However, in the haste with which the aliens abandoned their lair, they left behind some technology, an engram used in the cloning process.  Kincaid and Blackwood realize this when a pair of soldiers show up, looking for the device.  The aliens are dispatched, and Harrison brings the device back to the underground safe house much to John's consternation.  Blackwood correctly deduces that the device has something to do with the cloning process, and soon he and Suzanne discover that allows for memory transference. 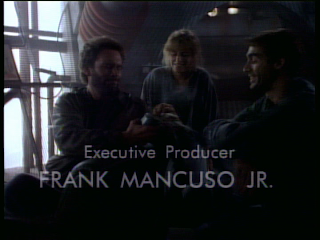 The aliens that Kincaid ran off the road in the opening weren't idle.  They grabbed a human, a priest, who had seen their glowing green blood and brought him back with them. Mana used him for further experimentation, cloning him and sending him back to his mission as a good source of human bodies that no one would miss.  Since the mission is located very close to the team's new hideout, Kincaid becomes aware of problems thanks to a perceptive lunatic.  The cloned priest is identified and dispatched with the help of the engram, the original stumbles out of the alien base, and the team settles into their new home.

The Good: Kincaid seems a lot more likable in this episode. There's less "poochie" going on with him.  That's important, since we're going to be seeing a lot of him.

Norton and Ironhorse are mentioned five or six times, by Debi ("I wish I had a picture of them") and Suzanne ("Norton would want to throw a party") and Harrison ("SOME of us [survived]") and John ("I won't let you down, Colonel" ).  This feels good and natural; they've lost friends, they wouldn't be in good spirits about it.

It's good to see some attention paid to the idea that the team is (was) an official government project.  They don't just go underground, they attempt to reestablish contact. 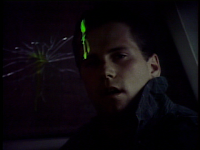 There is a fantastic exchange between Ardix and Mana about the priest they captured.  Mana: "God... what does it mean?"  Ardix: "It's their idea of the﻿ Eternal. This is their sacred text, a mad confusion of myth and contradiction. Their God... is invisible."  I suppose to a race that coexists with their deity, our theologies must seem pretty absurd.  Fantastic delivery on the word invisible by Julian Richings.  The scene where they nabbed the priest after he spotted the bleeding alien in the car was also well done.  It felt like a S1 moment, to be honest.

Still on the aliens, I rather like Malzor's almost-but-not-quite panicked retreat from the industrial center. It makes sense; he knows or suspects he didn't get all his enemies, so why stay in a compromised position? He and Mana have great tension between them; they really don't seem to like each other much. His rushing her directly leads to the loss of the engram, one presumes. Also, nice symmetry between the aliens relocating and the humans doing the same. 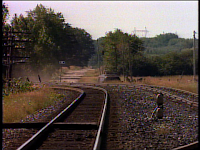 I also rather like the very first scene of the episode.  The team is driving past railroad tracks and through fields.  Gradually, more and more detritus is present as they get closer to their destination. It represents a transition from the old world, of sunshine and nature, to the new world of urban decay. A subtle but welcome touch.  They're literally going to the 'wrong side of the tracks,' you see, a tiny visual gag to those paying attention.

The new safe house seems pretty cool, an old abandoned cold war bunker. Since in many ways the 2nd season represents casting off the cold war vibe of the war and turning it into an underground struggle, this seems thematically appropriate.

The Bad: The plot seems oddly disjointed.  All the stuff with the engram feels about right, but the priest plot seems bolted on.  The aliens just randomly grabbed a human, so they clone him and send him back to his job.  THEN the team manages to find out about it? Bad story structure. 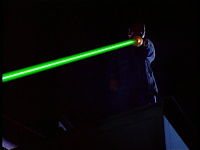 An alien gets the drop on Kincaid as he attempts to flush out the clone near his base, even though Kincaid has cameras all around. Then the alien misses and Kincaid blasts him away.  Thus, with the new action threshold of this season, we get the tired old cliche of the bad guys all being lousy shots.

The last scene involves the team running back to their safe house, all of them fairly cheerful.  I'm sorry, I don't buy it.  It's still too soon.  Yes they scored a (minor) victory, but I don't think they'd react that way.

While No Direction Home is a fine episode title and a nod to Bob Dylan's "Like a Rolling Stone," I think I prefer bible verses.  (This isn't REALLY a bad, I guess, but I had to list it somewhere.) 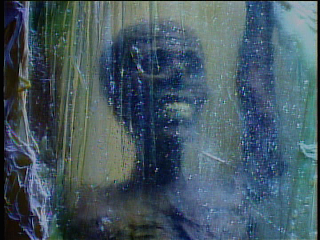 The Ugly: In the abandoned alien base, we see the result of Mana's failed experiments that she didn't have time to pack up and bring with her.  Decayed bodies in alien pods makes a good 'ugly,' don't you think?

It's a decent second episode.  In some ways, this new format seems a lot more ambitious than the old one. We're more on edge, less certain of what will happen next.  There's more room for commentary and artistry, such as the directorial trick with the railroad tracks in the first scene. On the other hand, the scope of the war is narrowing from a nation-wide (never QUITE felt global to me) struggle to a clash limited to one deteriorating city.  And, as noted above, the priest plotline didn't feel truly integrated with the meat of the episode, the engram plotline.  Still, I think on the whole the good outweighs the bad.
Posted by Jimtron at 3:16 PM

Yeah, I found this episode confusing, and I'm sure it would've been a lot easier to understand if they didn't have so much going on. I felt the whole priest thing needed to be dropped too. It felt too tacked on at the last minute.

I really miss Ironhorse. Norton not so much because he didn't really do a whole lot, and like you said earlier, definitely would've been a hinderance in this new world. But not having Ironhorse around anymore is just too big of a hole, and certainly one which Kincaid can't fill.

Funny thing about the bad guys always being lousy shots for this series is, aren't the aliens using all their own weapons now? No more grabbing automatic weapons and all that, it's lasers all the way. You'd think they would be fairly used to using their own weapons (as opposed to the old aliens, who had to use human tech), so why are they such lousy shots? As far as I know, there shouldn't be any kickback with lasers, and they are pretty much impossible to avoid, unless you can move faster than light.

thanks for the spotlight on "the wrong side of the tracks" trick. that's brilliant and i'm embarrassed to have missed that (then again, i've only seen the series one time in my life, as a kid).

trivia: along with the sound effects, watch out for reuse of props and sets from Captain Power. if not in some construction, at least in design and concept, the underground base of Kincaid's is very much the base Captain Power's team worked from. an interesting similarity between the two shows is that the end of Captain Power's first (and sadly only) season saw the comfort and safety of the base destroyed in favor of (what was planned to be) a more unsure and risky roaming resistance. sound familiar? also, i'm pretty sure that some of the model in the S2 introduction is stuff that was either built for or at least used for Captain Power's intro...

1. those aren't lasers.
2. the show's creators briefly experimented with the idea that the aliens made some mistakes in changing their bodies to human form. the most obvious surviving element is the use of three-fingered "tongs" to manipulate medical/scientific stuff instead of making direct contact. i remember this from a Starlog story. so the very large bulbous "cabbages" that the Morthren have for hand weapons are initially terribly suited to small, many-fingered human hands. this could kinda help explain the poor shots... but later in the season these are reduced (especially for use by certain important characters like Malzor, and in general)... but this is fan-explanations for a cliche/trope of TV... the badguys, especially if warriors, should not be so poor at killing their enemy with ranged weapons (or at all).