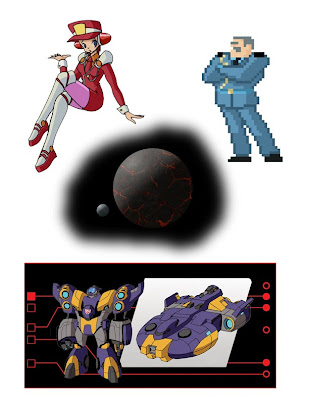 So, we're frantically getting ready to depart for BotCon, but wanted to get another The AllSpark Almanac II

This first set of images is four finalized images. I won't say exactly what they are, but most of them you guys should be able to, at least partially, guess. The contexts in which they are used, though, will be VERY hard to guess. But, uh, don't let that stop you. I know everyone's psyched for BotCon, but I'd be very curious to see how close you guys can get. BTW, it's a minor thing, but I'm rather proud that each of these images comes from a different chapter in the book.

For credit where credit's due, the upper left and center images are both from Bill Forster, as are the background design elements in the bottom image. The upper right image is by friend-of-the-blog David Willis, and some processing/updating on the color of the Omega Sentinel was done by Javier Reyes.

The next image is just a sketch, though it's a sketch of something that actually makes its way into the book. Bill and I spent a stupidly huge amount of time on the 2.3 pages that this sketch represents.  It's one of the weirder ideas in the book, but I think (hope) that you guys will appreciate them.

That's it for now! If all goes according to plan, we'll be showing off a couple or three pages at the IDW panel at BotCon. I hope to see you there! Introduce yourself if you see me wandering around.
Posted by Jimtron at 11:58 PM

Is the top right Miles Mayhem. If so that is awesome.

Hmmm, Animated character cosplaying T-Ai? Or Arcee if she was humanized? M.A.S.K. the Video Game rocks... And a chart of what... all that teleporting Megatron and Screamer did in Omega? (Looks like that could make a cool Board Game btw).

I guess the planet is New Kaon.