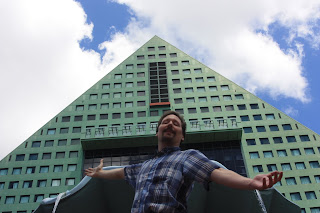 In no particular order, recollections from BotCon 2010.  This is all from memory, so if I get a day wrong, don't sue me.

Thursday: Time zone differential between LA and Florida means that I have to take an 8:00 am flight to get there in time to register.  That means a 5 am wake-up time.  Grrrr.

Meers Shuttle is $33 round-trip, not terrible but not great.  Takes well over an hour.  Bill was texting me from the registration line with info on the exclusives.

Registration line went much faster than usual.  F.P. reshuffled the alphabet so now it's Q-S. Breaking the S from the T == great idea.

Toy line went SUPER fast this year.  Not sure what they're doing but keep it up, guys!

The convention theme for this year is bitchin'!  G2 for the win! I just wish they had G2 Ramjet / AM Thundercracker in the classics seeker mold.  As an army builder, I heartily approve of the Sharkticons.

Got my first taste of BotCon socializing in the registration hall, catching up with Bob Budiansky, M Sipher, Trent Troop, Walky, Thylacine 2000 and many more.  Had dinner with some of these folks, hamburgers all around. Borrow Exodus from Walky.

Watch one of the new Futurama episodes with Bill.  It's hilarious.

Friday: Lines restart.  Panel lines are different from registration; they're completely static, then they almost immediately dissipate once the doors open. I spend time with some #wiigii! folks on line, till they ask me to get the line moving.  I do so, and they are suitably impressed. 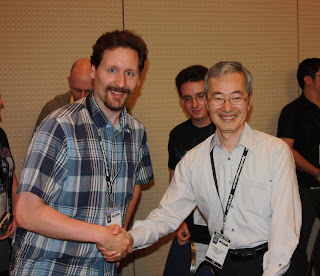 The panels start! Yoke-san was terrific to hear from, and I got a photo with him.  Normally I don't go in for that sort of thing, but I figured he's worth it.

Dealers room opens! I am disappointed to find no character models, though I'm happy to pick up All Hail Megatron Coda.  I also nab a couple of Zods.  Yup, GoBot Zods.  KNEEL BEFORE ZOD!  Still, relatively weak haul for me.

Said hi to Marcelo, Alex Milne, Matt Moylan, Chris Mowry, Casey Coller, many many more. Introduced myself to Carlos Guzman, who seems like a really easy guy to talk to.

Caught up with Eric Seibenaler. Gave him back some Hasbro assets that they lent us for Almanacing, which was a relief.  (I take NDAs and custodianship of that sort of thing EXTREMELY seriously.)

Dinner with Bill, the Italian place at the Swan. It's fantastic.

Bump into Marcelo and Aaron Archer at the bar, talk about the new Almanac for a bit.

Read about half of Exodus. Then sleep.

Saturday: Go looking in the dealers room for something for my wife, some sort of souvenir. Find very little.

Panels restart. Hub panel is quite exciting. The phrase "rightfully huge" is coined. I do some networking before/after. Bumped into Brian Kilby, who gets me to commit to a live interview.  NERVE-WRACKING!

Hasbro panel was great, as always.

Skipped the Cullen panel to catch-up with the wife.

Roundtable panel, they WANTED to do AM Thundercracker. Alas, was not meant to be.  G2 Ramjet, though, is coming. 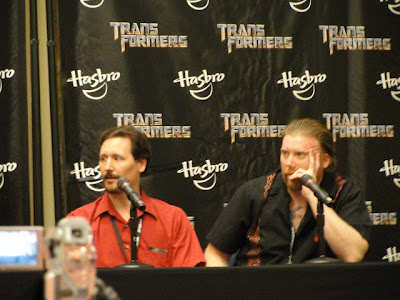 IDW Panel, with some last-minute slides from me. (I fight hard to promote my stuff!) Casey is full of info on Ironhide, a great mini-series. Read it if you're not doing so already.  I get just a couple of Almanac II questions, which is slightly disappointing.  The response to the three page preview was pretty great, though.

Watch the second new Futurama episode. I love Zapp Brannigan, but it's slightly weaker than the first episode. Still hilarious, though.

Hall of fame dinner: surprisingly awesome. Kudos to everyone who put it together.  Yoke-san is humble, Bob seems a bit taken aback, Cullen seems emotionally overwhelmed.  Fan favorite Dinobot beat out Grimlock, Soundwave, Shockwave and Jazz.  I expect some, if not all, of those other bots induced next year.  While we're on the subject, I expect to see Furman and Welker inducted too. Just my guesses. Dinner is tasty, but portions are small. Got to spend it with Dan Khanna, which is fun.

BotCon 2011 in Pasadena, CA! That's 25 minutes from my house. Awesome.  (It's also a VERY smart place to hold it, since so many of the folks involved in making the cartoons live out here.)

Finish off Exodus, then sleep.

Sunday: Running on fumes. One last pass through the dealer's room, finally find something my wife will appreciate.

Hasbro spoils us with their design panel. Seriously, guys, you are too cool for words.  SOOOO much cool stuff coming out next year.

Do the Hasbro combat training scenario. Surprisingly, get 7/8 shots in. Have fun yelling "SIR YES SIR!"

Find Walky, give him back his book.

Head to the airport via shuttle. Fail to get on an earlier standby flight. Use the opportunity to finish out the new season of Doctor Who. (Am still synthesizing an opinion on that.) Get delayed a bit by a storm. Have to rush to make my connection. Take ANOTHER shuttle home, very slow. Get home, unpack, am pleasantly surprised to have not forgotten anything.

Wrote this blog post. Am chagrined to find that Hasbro hasn't put up my photo from their combat training, and Bill hasn't sent me any of his photos. This situation eventually gets, at least partially, rectified.

That was my experience; how about yours?

Email ThisBlogThis!Share to TwitterShare to FacebookShare to Pinterest
Labels: BotCon

Envy on you getting to meet Yoke-san! :V We hardly get any of the Takara folks stateside! FP should maybe consider inviting more Takara people over (would really LOVE to meet some of the Japanese VAs). *wishful thinking is wishful*

When you're coherent, do you remember ALL of those at IDW's booth, and the panelists during the designer panel? One of the panelists' surname at the designer panel seems to be misspelled (Lenny "Kanziga"), and I'm wondering about the Takara employee who's on exchange with Hasbro (he's either "Miyake", "Miake", or "Yake").

And yay for Pasadena next year! *crosses fingers*

Since you commented about wanting AM Thundercracker AND G2 Ramjet...

A few of us are pushing FP to do a 2-pack of both, rather than only giving us G2 Ramjet. I, for one, would MUCH rather have AMTC than Ramjet, but why make this a battle between the two? And it gives FP a chance to do a "larger" exclusive again.

Here's a tweet I've posted to this effect, and am encouraging retweets to try and get FP's attention while something may possibly be done.