How time sneaks up on us!  The AllSpark Almanac II

(preorder it today!)  is a mere twelve days away, and betwix now and then there is the juggernaut that is BotCon! So, without further ado, let's start with some previews for the upcoming Almanac.

I figured I'd start in an unusual direction; last year, the first preview images were tiny little snippets and sketches, designed to tease without giving too much away.  This year, that'd be less effective; you all know approximately what the book will look like.  Instead, how about some images that WON'T be in the book? Ideas and characters that we considered using but rejected for whatever reason: time, space, a better idea, etc. 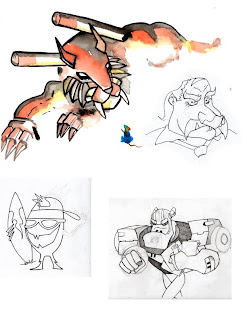 FIRST UP, some of the abstract notions we decided not to use.

Upper left: As has been reported elsewhere, we'll be covering the Cyber Ninja Corps in some depth.  That seemed like a page that might be worth delving into with some interesting imagery, so one idea we had was to tell some fables in a traditional Japanese art style.  To the left, The Lion and the Mouse, as told with Victory Leo and Packrat. This image would have appeared VERY small in the book, had we decided to use it.

Upper right: A Cybertronian artistic rendering of Fanzone. Obviously they got some of the details wrong.  Note the strong Beauty and the Beast influence that bill allowed to creep in.

Lower left: An unused Kremzeek idea; Kremzeek as Poochie.  I liked the way it came out, Bill didn't. Since Bill is the visual boss, I deferred to his judgment.

Lower right: A political cartoon about Sentinel Prime. I don't remember exactly what the idea was here; I think we were going to label the stuff he was holding. 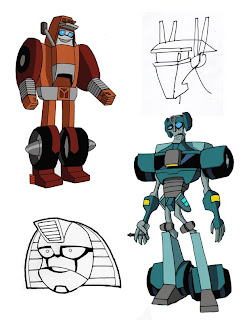 NEXT, some character ideas that didn't make it into the book.

Upper left:  Animated Wheelie as a GoBot.  Bill and I are both big GoBot fans, so we wanted to pay homage to the design style.  Bill says that, if you look closely, you can figure out which two GoBots are Wheelie's parents.

Upper right: An Animated Jetfire based on the G1 toy. Since there already is a Jetfire in the universe, it would have been hard to work him in.

Lower right:  Animated Kup, Spotlight: Kup style.  Bill and I are both huge Nick Roche fans, and Bill wanted to pay homage to Nick's design with his own version of Kup.  Note there IS a hint of AHM Kup in the cigar he's holding. I love that damn cigar; it's SO him.

There you have it! Eight drawings that won't be in the AllSpark Almanac II.  However, it'll give you some insight into our thought process.  Next up, rough sketches of ideas that WILL be in the book!
Posted by Jimtron at 9:22 AM

All due respect to Bill; these are cool and interesting interpretations of the animated style, but they are not in the same league as the actual show art. The people buying this book want to see art from Derrick J Wyatt and his team of professional animation artists that designed the show we love. We're not paying for a fan art book.

Not to say it wouldn't be cool to put out a separate fan art book later. Just please not in Allspark Almanac II.

Well, you may be disappointed, there is quite a lot of Forster original material in this book, as there was in the last one.

That's okay, no disrespect meant, but hoping its in the same proportions as the last book - which was brilliant.

Well Anonymous, ...may I call you Anonymous? You realize of course, these were sketches of ideas. Not finished works of art, right?

Rest assured, the Almanac II looks better than the first! So don't worry!

They are very fun drawings, Bill. Thanks for sharing them.

Interesting take on Mirage as froggish. How do you think he would've been further developed? (Loooved the first book btw)

Mirage? Oh I don't know. I stopped developing him when a MUCH better situation came along. Which was good for me because I was running close to the deadline.

His body would not have been frogish. I had a crude sketch of a basic body design, Javier even colored it for me, but it was pretty straight forward. His front end became his shoulder rocket launcher. His large back tires were his shoulders. Ultimately I didn't like it so it ended up just being a placeholder on the page until another direction presented itself, which I assure you, you will like!

I just was goofing around and drew his face a little like a frog. When I was a kid I always wanted to hear him say," Ribbit, Prime!" I don't know, I was stupid kid. No disrespect to Mirage though, I like frogs!

Haha don't we all but I think Spittor has got the frog angle covered anyway.
Looking forward to book 2 mate!