Review: War of the Worlds, the series ep 26 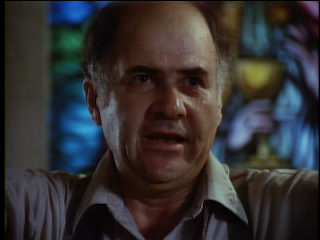 The twenty-sixth episode of War of the Worlds, the series is titled Doomsday.  In the face of a massive heatwave and drought, the aliens have concocted a scheme to shut down the city's water system.  As an addendum to this plan, they try to hijack our worship system to get humans worshiping the Eternal.

The Blackwood Team, meanwhile, start to suspect something is amiss when they witness water flowing from the baptismal font of a church. Harrison and Suzanne track the water to the source, the city's blocked-off water supply. Kincaid, meanwhile, witnesses the priest getting abducted by aliens and tracks him to a cloning lab under the reservoir.  Together they blow the alien membrane holding back the water and get the Priest and his son out of the lab.  The priest confronts his doppelgänger and they both die of unclear causes even as it starts to rain.

The Good: There are some neat exchanges between Malzor and his minions. "What kind of life form bases itself on water when the water supply cannot be depended upon?" wonders Malzor after Ardix informs him that their clone templates were cooking in the heat.  Later, a distracted Mana calls the Bible a "blueprint for human control."

Unfortunately, however, there wasn't much else that I really enjoyed in this, the first truly 'typical' episode of season two.

The Bad: Suzanne freaks out while they're underground.  Why? We've seen her underground before in Goliath Is My Name with no issue.  It didn't add anything to the episode and just made her character seem weak. 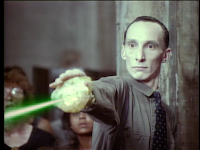 Why did the priest die at the end? Heart attack? Not at all clear. And why did Ardix then stand up and blast the clone of the kid? And from now on, The team should know Ardix on sight. We'll see if they do.

When Harrison starts futzing with the membrane, the aliens discover this and send guards. Ummm... why didn't they have standing guards there?


The Morthren give the priest several miracles: water; he apparently 'heals' an alien; they replace his son with a clone, who appears dead and then comes back to life (after a way-too-apt reading about Lazarus.)  Only after all this do they replace him with a clone.  Ummm.... why not do it the other way?

And the whole team just happens to be in the church where the 'miracle' takes place? Major coincidence. 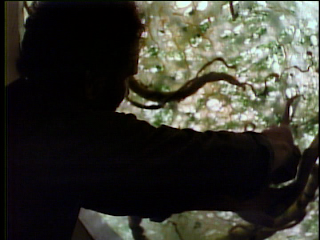 The Ugly: How about the membrane over the water supply? It's not much, but it's what we got.  Even the few dead aliens this episode didn't get the full corpse treatment.

After a strong start to the season, this episode seems like a huge step backwards.  We're starting to see the limitations of the new format; whereas before the heroes could get intel on the aliens from anywhere in the country, now they literally have to stumble into the building where the alien schemes are taking place.  We're starting to learn about the bleakness of the new environment, with water shortages and dirty desperate people huddled into churches, which should be a good thing but completely failed to hold my interest.  It's not interesting-bleak, it's dull-bleak.  This is especially troublesome, since this episode is the first 'standard' episode of the season.  This is the template upon which others should be created, and so far it's not looking promising.  We'll have to see if it gets back to the promise of the first couple of episodes.
Posted by Jimtron at 1:37 PM

I agree about the distracting aspect of the environment's bleakness throughout the whole second season. It's one of the major reasons why I dislike the second season so much. It not only seemed tacked on for no apparent reason with no explanation, but it also made the aliens seem superfluous. After all, it seemed like humans had conquered themselves, with no need for alien involvement. And why would the aliens themselves want to inherit such a decrepit world?

Another note: The aliens' comment about human dependence upon water is weird. Aren't these the same aliens who love eating plants, such as roses? Plants rely on water, and without plants to eat, I think these guys would be in as much trouble as we would. Those in glass houses...

yes, the "dependence on water" comment is terrible. it's the naive (ignorant) writer's impression of how to create an "alien perspective" ... which Mancuso already did his best to stomp out by eliminating everything truly alien about the series' antagonists. (either way, the aliens as human or as Mor-Taxians are just as dependent on water as most forms of known life - it's a very common chemical process for life to function through use of water and even if a life-form existed that didn't at all depend on it, we as yet have no examples and they would NOT look like humans in any form ... silicone-based life-forms might be rock-like or something ;-) )... and look at the Morthren's organic technology... very wet... and later on the nutrients they live off of... yep... naive "scifi alien differentness" dialog indeed.

but the alien commentary on human religion (christianity seems the only one they go after in this series) in this and the previous episode are excellent. as an atheist, i see the commentary rather solid instead of the intended "these aliens aren't as powerful and advanced as they think they are because they totally don't get human religion and the wonder of god," etcetera...

it's nice that an occasional human victim of cloning escapes from the aliens (or even lives), but come on... intervention by god? i know it's just the character's interpretation, but this season spends a lot of time having the Morthren criticize human faith only to have the cliched "people of faith are charmed" kind of resolutions... it's misguided. so i think it's particularly humorous how valid i find much of the Morthren's criticism... such as Ardix's fabulous description of "their version of the Eternal... their god is invisible!" and Mana's very salient description of the holy bible as a tool for controlling people...