Hasbro calls him Autobot Hound now, of course, but I just call him plain ol' Hound. He's gotten plenty of love from Hasbro in recent years, first as an Alternators toy and more recently as the adorable Robot Heroes figure and the cute little Legends edition. Throw the Takara G1 reissue into the mix, and that's a surprising amount of attention given to a second-string Autobot who simply didn't have the staying power of more popular characters like Jazz or Bumblebee. Hasbro's most recent version of Hound is an amazingly good toy, both from a nostalgic perspective and an engineering standpoint. 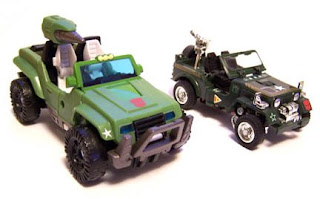 Pretty much the only thing I don't like about Hound is the fact that he's not a Jeep. It was one thing when Hasbro was licensing the rights to reproduce accurate vehicles for the Alternators toys, but now that their licensing agreements have expired, it's back to making vehicles that sorta-kinda look like the real thing. He's shaped more or less the same, but there are lots of little cosmetic changes like spotlights mounted on his windshield and square-shaped headlights and a front rack that really means business. Maybe this could be Hound's original Cybertronic configuration? (His vehicle form is described on his packaging as an "off-road mode.") He's really solid and compact in this form, with an economy of design that I really like (unlike a lot of toys with glaring gaps in their undercarriage, absolutely no space is wasted in Hound's case).
Hound is essentially a cute, chunky, simplified version of the Alternators toy. He transforms about like you'd expect, with the back of the vehicle forming his feet and his arms unfolding from behind the front wheels. One particularly clever design feature is the way his vehicle seats fold up seamlessly to form his upper legs. Note that the instructions direct the consumer to position the wheels on his back so that they're at an angle with respect to each other, but I think he looks better if you arrange them parallel to one another, which emulates the design of the original toy (and is therefore, I think, the designer's intention with the new version). I don't know if this is an undocumented feature or an odd bit of serendipity, but the green panels on either side of Hound's legs can rotate into a more aestetically pleasant configuration, which also echoes the G1 toy. 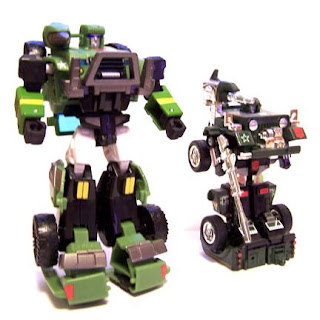 The original Hound toy was one of the shortest Autobot Cars at only three and a half inches tall; the new Hound dwarfs him considerably, towering over the old toy at five and a quarter inches. Even moreso than most of the other Classics designs, the new Hound toy really pays respect to the original character. It's specifically designed to look like his cartoon incarnation, with green forearms and those classy yellow stripes around his arms. Even his color scheme, which is predominantly a vibrant light green, seems intended to pay tribute to the animated version of the character. His head design, in particular, is extremely faithful to his original cartoon model. He's got between 15 and 17 useful points of articulation as a robot, depending on whether or not you count his fists (which tuck into his forearms during transformation). Like the Alternators toy, the bottoms of his feet can pivot so he can assume a more wide-legged stance and still squarely plant his feet on the ground. He comes equipped with a non-launching version of his old shoulder cannon (identified as his hologram projector on the package), which he can attach to his shoulder, carry in his fist, or use in vehicle mode. (Curiously, an early version of the toy pictured on his packaging shows him with one fist with a peg hole and one fist without one, just like the Cyclonus toy. He's also pictured on the package with black forearms and green fists and a more elaborate yellow stripe pattern. I much prefer the finished product.) 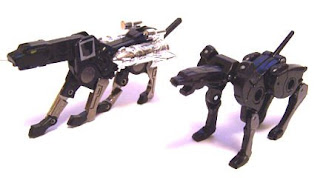 Hound is paired with Ravage, which frankly I find to be a little bit bizarre. The characters did interact during the course of the cartoon pilot episode "More Than Meets the Eye," during which Ravage was captured by the Autobots and Hound served as his prison guard, so I can only assume this was the logic behind pairing these two characters together. (I'm just thankful Ravage gets to use his original name these days, since he was saddled with the ungainly Battle Ravage moniker for several years.) 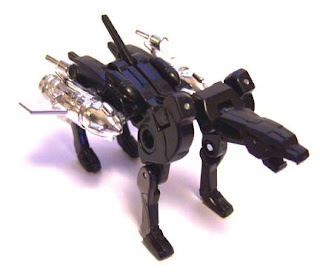 The problem with a lot of the original Transformers mini cassettes was that they were very limited by their design. Either you ended up with a really flat and skinny robot (Rumble/Frenzy, Eject/Rewind) or an awkwardly narrow animal (Steejaw, Ramhorn, Slugfest). The cassettes relied a lot on their weapons for much-needed bulk, and the original Ravage was no exception to this. The new edition of Ravage is a remarkable feat of engineering, and unfolds into panther mode in a completely new and different way. The end result is a transformation that's actually three-dimensional, and he still looks like the original Ravage to boot. He's got about eight useful points of articulation; his hind legs swivel and all four legs can bend at the knees; his tail and head also pivot. His jaw is permanently open and does not close, and unlike the original Ravage toy, he lacks ankle joints. 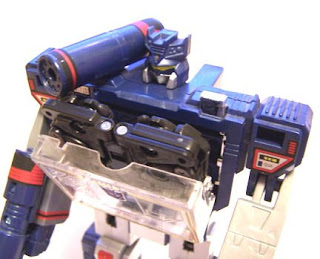 Ravage is designed to mount to Hound in vehicle mode, using two little flip-up tabs on Hound that fit into the cassette spools on Ravage. I guess it makes sense to make the two toys compatible with each other from a marketing perspective, since they are packaged together. (Maybe this is how Hound transports his prisoner to a more secure holding area. You know, one where he's less likely to drop the cell keys right next to his prisoner.) Ravage also has two really nifty undocumented design features. One is that, as you may have heard, he was designed specifically to fit inside the original Soundwave toy. The fact that he's compatible with a toy released 25 years ago is nothing short of awesome. Just as cool is the fact that Ravage's tape spools are the same size as the original, which means he can wear the original Ravage missile launchers. The new Ravage does have a pair of puny little built-in missiles molded to his hips, but I really like the way he looks when he's wearing the G1 accessories.
Hound is an impressively designed toy in and of himself, but when you throw this super-cool updated Ravage into the mix, which is easily worth at least half the purchase price, you really are getting an awesome deal. If you're reading this review, you have absolutely no reason whatsoever not to buy this toy.
Zob
Posted by Zobovor at 9:36 AM

Oh, this one definitely is a "must buy." I just have to actually locate one....