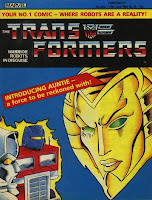 Simon Furman continues the story he began in Issue #18 and the art team remains unchanged as well. Pencils are by Collins and the inking is handled by Anderson. Gina Hart continues to supply colouring to the pages she is allowed to.

The cover is not enticing, to say the least. It depicts Auntie, taken from an interior panel (that panel is in black and white, whereas this is in colour, so at least there’s some added value there) while Megatron and Optimus Prime look on in shock. The problem is that neither of the Transformers seem to be really looking directly at Auntie, and, more grievously, the three characters are against an unbroken blue background. The figures of Prime and Megatron are lifted art as well, albeit also coloured anew, but the composition is so lacklustre that it is difficult to be pleased by this. The text promises us that Auntie is “A force to be reckoned with!” which is accurate, but does nothing either way to save this cover.

The issue opens with the battle still raging from last time. Optimus Prime reflects on how badly the fight is going when suddenly he remembers Auntie. So far they have only been using The Ark‘s basic computer functions, the AI still lies dormant. He retreats from the battle to see if he can get her online. Megatron, rightly guessing that Prime would not simply retreat, follows to stop whatever plan he must have. Optimus is able to repair Auntie just as Megatron appears and blasts the console that he is working on. Prime thinks h 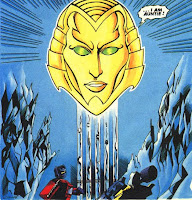 e has failed as Megatron attacks, but their tussle is interrupted by a voice saying “I... function...” The holographic image of Auntie bursts into life as Megatron and Prime stand in shock. She tells the occupants of the Ark to cease their hostilities and activates some kind of magnetic power that forces them to stick to the bulkheads. Auntie then tells Optimus Prime and Megatron that she will hear both their cases and arbitrate between them. She ignores Prime’s entreaties that she was built by Autobots and that the Decepticons are evil. She refuses to believe that she was built by anyone and says “Let the trial begin...” 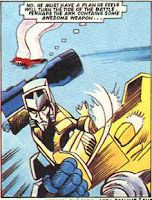 s a very good second issue in a lot of ways. I love the twist that Auntie is not completely herself and is now a danger to everyone in The Ark. There isn’t really a lot that sparkles in the script, but there are only five pages and everyone is perfectly within character, Prime coming up with a desperate plan to save everyone and Megatron seeing awesome weapons around every corner. I feel there is something of a logical flaw in the idea that the Autobots hadn’t bothered trying to repair Auntie at some other point, before the Decepticons attacked. Considering that Prime says “She WAS the Ark.” and that she controlled all of The Ark’s internal defences you would have thought that she would have been more of a priority. With the battle abruptly ended, it will be interesting to see what Auntie is going to do next.

The art is more of the same from Collins and Anderson. They serve up competent toy-inspired Transformers who inhabit their environment in a believable enough way. Unfortunately their idea of the interior of the Ark is rather dull. I get the impression that they were tasked with creating a cavernous, alien, environment, but unfortunately their efforts to provide scale mostly end up in emptiness. In most panels the Ark is an anonymous blue background with the occasional grid line to suggest a bulkhead or two. There is a certain crystalline look to parts of the ship, particularly the chamber where Auntie appears, which is an interes

ting idea, but doesn’t really gel with the look of the Transformers, Cybertron, or other appearances of the ship. My favourite image is Auntie’s initial appearance, she is well designed, obviously feminine, but Cybertronian enough to be interesting. I also think that the rendering of the Autobots pinned to the wall by Auntie’s magnetic field is quite impressive, both for detail - no generic background robots here, and for colour - everyone is in their correct colours and there is no block colouring. Hart continues to impress. The creative team for this part is identical to the last.

This is a horrible cover. I’m not being hyperbolic, I actually hate it. It is a reproduced interior panel of Windcharger and Ravage being struck by Auntie’s electric field. Inside it works fine as an action panel, on the cover, blown up to entice a reader to pick the issue up, it is hopelessly lacking. Windcharger is small and cramped as he reels from the electrical charge, and Ravage is curiously out of scale and poorly detailed. His head and neck appear almost disembodied, in a contortion I’m not even sure he can manage. I appreciate that this is not a specially commissioned cover, but the issue itself contains at least two or three images that would have made better covers, the best of which probably being the hulking Guardian robot.

Windcharger and Ravage find that they are the only two Transformers unaffected by Auntie’s magnetic attack, due to their own magnetic powers (set up by Furman two issues ago). They reluctantly agree that it is in their best interests to team up for now. Ravage dodges laser fire from the Ark’s internal gun turrets, taking a hit on the paw, but not being seriously wounded. However, before they can react, both are struck unconscious when Auntie hits them with an electrical attack. Auntie’s trial of Megatron and Optimus Prime continues, with each trying to plead their case. Megatron’s, of course, is all lies. Optimus manages to persuade Megatron that Auntie has gone mad and will not spare either of them. Megatron says that he might be able to free them. It turns out that Ravage had managed to rapidly shut down his vital systems before he was shocked, avoiding the worst of the attack. He now ha

s the dilemma of whether to revive Windcharger or not. He decides to, because he does not want to face Auntie alone. The two of them come up against an armoured door, and then turn, in shock, to see they are being faced down by an immense Guardian robot.

This script, while still short and to the point, had more interesting dialogue exchanges. Windcharger and Ravage make a good pair of unlikely allies, which is, of course, a traditionally good way to generate fun dialogue. I particularly enjoy their exchange just after Ravage revives Windcharger. Less successful is the dialogue between Optimus Prime, Megatron, and Auntie. Megatron comes across as unbelievably slow-witted. The idea that Megatron, the ruthless leader of a group called the DECE 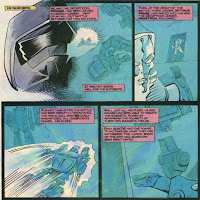 Pticons would have to have the idea that Auntie might not be telling them the truth painstakingly explained to him by Optimus Prime is wholly out of character and awkward. While Windcharger falls unconscious there is a flashback sequence that takes up nearly a whole page which details how the story arrived at this point. Obviously this was an editorial decision to bring new readers up to speed. It is therefore, of course, excessively detailed and awkward, but that is forgivable, as many of the Marvel comics have similar sequences and they are easily skipped, however, I find it more irritating here than I normally do, because it takes up nearly a page when there are only six to go around.

Furman guides the story along briskly, obviously mindful of the lack of pages he has to work with. He ratchets up the tension fairly well, giving Ravage and Windcharger progressively more difficult threats to face, and Guardian’s appearance is a well-done cliff-hanger (albeit one that relies more on some impressive art as much as scripting).

My opinion of this team’s artwork has not fluctuated at all, although it is somewhat hard to determine exactly what has happened when Ravage accidentally gets struck b

y the Ark’s laser. This version of Windcharger is ugly and hard to relate to, but that is not the fault of the artist, and I love the use of shadows in the panel where he is injured, reflecting his fading consciousness and his mood as he 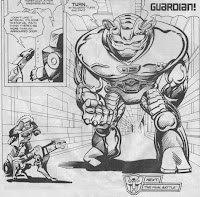 worries that he has failed Optimus Prime. My favourite image of the lot is still the Guardian, who should have been on the cover, but once again I find myself complaining that the best artwork in the issue is in black and white. It is a crime that Guardian should have been spared the deft touch of Gina Hart’s inks.

Overall I’m enjoying this story the best out of the early UK stories I have read so far. Not everything has clicked yet, but the scripting is strong enough to carry the narrative and the art is certainly worth a look. Hopefully the final part will deliver a good pay-off.
Posted by Bishbot at 9:38 AM

No comments yet? Well, a few thoughts then:

Maybe this is an attitude I carry over from the sense of ancient mystery that pervades the TF cartoon universe's Cybertron, but I like ambiguity. I like it enough that I'm eager to forgive slight "mythos" continuity inconsistencies. While the Dinobots being simply constructed and brought to life without the later-established Vector Sigma is something I can't forgive (hence, Marvel's Dinobot origin wins, hands down), I liked that "Call Of The Primitives" supposed confusion on TF origins brought back some of the mystery that was lost when Rodimus learned that they were originally a slave race made by the Quints.

So rather than seeing Auntie's femaleness as a continuity problem, it just makes me curious what timelost force introduced any concept of gender into this TF universe: Another oversight or fallback plan on Primus's part? An alien encounter? It makes me wonder, but not cry foul.

And though I'm loyal enough to comic continuity that I don't need everything to have a parallel to the cartoon, when I see that picture of the Guardian, all I can think is that my favorite TF universe would be a slightly better place if their guardians looked like the ones on the show. I know that's impossible, since David Wise wouldn't write "War Dawn" for at least several months after this was published, but it would seriously jive with Omega Supreme's creation in US#19. This Guardian looks just a tad too much like the Mad Thinker's Awesome Android, and I wonder if that's a coincidence. Maybe ROM knows...

Oh, and Windcharger is about the only year one character whose toy head I prefer over his Sunbow face, so I'm quite glad that the only story he ever really starred in used that design. He looks sort of like Barbecue from G.I.Joe. I still like his cartoon face enough that I wish I could find his new RTS toy...