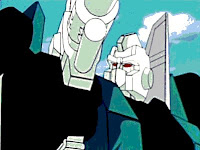 Jim has graciously allowed others to contribute more content to his blog in the form of comic and toy reviews, so I asked about contributing reviews which will focus on episodes from the Takara-produced "Transformers: Headmasters" series. Obviously this series needs no introduction to fans who read and post here, but for the uninitiated this was created to follow season three of the US animated series, ignoring the three-part "Rebirth" storyline and instead continuing along for a Japanese-specific audience only the escalation of the Autobot-Decepticon war, once Scorponok, Fortress Maximus and the other Headmasters are added to the fray. Thanks to the subtitled DVD releases by Metrodome in 2005, fans in the States could finally dive into fresh animated adventures in the G1 universe and explore the 35-episode season, which I would like to do here, using the subtitled versions for reference as opposed to the infamous and awful Star TV dub.

As with Seasons One and Three in the US version, "Headmasters" opens with a multi-part arc, this one consisting of the episodes "Four Warriors From Outer Space", "The Mystery of Planet Master" and "Behold the Birth of Double Prime". The first installment wastes almost zero time before jumping into trouble. The viewer is informed that it is 2011, placing this one year after "The Return of Optimus Prime" as the Japanese-dubbed versions of the show moved its third season to the year 2010. Galvatron, the Decepticon Headmasters, the Terrocons and Combaticons emerge from the old space bridge portal once manned by Shockwave during the first two seasons of the series. Galvatron announces he is after Vector Sigma, stating that it is equally available to both Autobots and Decepticons. In subsequent scenes we learn that Vector Sigma has been "malfunctioning" and destabilized since Optimus released the entirety of the Matrix energy to cure the Hate plague. Apparently during the ensuing year of peace, Galvatron no doubt bided his time and was perhaps now feeling bolstered by the off-screen introduction of the Headmasters into his ranks of Decepticons.
A full-on attack begins on Cybertron by the Decepticons, while Spike and Carly alert the new Autobot HQ on planet Athenia for reinforcements. Wreck-Gar, in what I think is his only appearance in this series, motivates Grimlock, his fellow Dinobots and the Technobots to counterattack in the meantime. I must make mention here of that fact that I happen to really enjoy many of the performances of the original Japanese cast and don't mind reading subtitles in the least. I know there are fan dubs out there and while I applaud their efforts, nothing can really replace a talented voice cast and both the and Japanese series featured this in spades. Even the actor portraying Blurr manages to achieve the same speedy line delivery as we got from John Moshitta's portrayal in the 1986 movie and following third season episodes. Other standouts for me are the voices for Galvatron, Soundwave/Soundblaster, Zarak and Mindwipe.
On Athenia, Optimus receives Spike's message, consults with Hound, Jazz and Hot Rod about what might be happening with Vector Sigma and soon dispatches troops to both Cyberton and Earth. The conflict rages on Cybertron, we witness Mindwipe's ability to hypnotize others, unfortunately and humorously also including Skullcruncher. Spike confers with Kup and Arcee, positing a theory that there is no way to control Vector Sigma and in order to restore its own balance it allowed the Decepticons to easily invade Cybertron. Spike leaves for Athenia and we then jump to Earth, finding that it as well is under attack. City Commander Ultra Magnus naturally leads the Bots here against Soundwave, the Triple Changers and Sixshot. We even glimpse Sideswipe among the fray! Sixshot begins a confrontation with Magnus which culminates in a much later episode and shows a bit of dry humor when after providing his name to his foes, says directly "I've introduced myself… now die!".
We then join Daniel and Wheelie in a run-in with Trypticon, who unfortunately does not get a chance to actually squash them. Yes, the fact that Daniel and Wheelie have such a prominent role is probably the least-liked aspect of this series. Sometimes they can be just window-dressing, commenting on the action, other times they are central to an episode and there are a few occasions early on when Daniel exhibits behavior more akin to a four year old than someone who is ten (see "Approach of the Demon Meteorite"). It doesn't really ruin my fun in watching "Headmasters", but there are for sure several grating moments with both their characters, even though Daniel does mature a bit by the end. Anyway, the two elude Trypticon and eventually sneak their way to Cybertron while Metroplex and the Trainbots join the battle on Earth, in a sequence quite reminiscent of the earlier American episodes.
All the Autobot reinforcements, including Optimus and Jazz, reach Cybertron and retaliate against Galvatron's forces. Kup, Arcee, Blurr, Spike and Carly arrive safely on Athenia, greeted by Hot Rod and informed that Optimus is planning to "recalibrate" Vector Sigma. We learn here that he no longer has the Matrix, that it is in fact "recharging" in a secret location after being drained in "The Return of Optimus Prime". Kup then spots an approaching mysterious object on their sensors, prompting him to tell the tale of how some Transformers fled from the war on Cybertron 4 million years ago and wonders if the same tragedy will occur again. We get a flashback here which features cameos from Megatron and Starscream in battle before Spike chastises Kup for being stuck in the past and determines the mysterious object is actually a battleship. Kup's character is noticeably and unfortunately both softened and sidelined in this series, similar to what happens to Arcee.
Back on Cybertron, Daniel and Wheelie are discovered and sent back to Earth, followed by some wonderfully animated fights between combiners Superion and Abominus, Defensor and Devastator, something this series really reveled in. A brief scuffle between Galvatron and Optimus leads to him being saved by Springer and the Triple-changers, before he himself heads off to Vector Sigma. The Dinobots and Throttlebots are protecting the entrance to Vector Sigma, but are soon subdued by the Decepticon Headmasters, thanks to Mindwipe's hypnotism. I think that even with Grimlock's small role here, they still managed to capture the humor in his blissfully ignorant fighting attitude. However, just before Galvatron and his troops can invade further, they are halted by the appearance of the aforementioned strange battleship and a booming voice from its depths. Suddenly four Transformers emerge from the ship and confront the Decepticons. Weirdwolf immediately recognizes them, they announce themselves as Headmasters and the episode ends here with questions of how they know each other and how will the ensuing conflict unfold?

This series, while not without its own stand-alone episodes, in general displayed more of a serialized format than the US G1 series and this becomes one of its more successful aspects. Obviously, the tone and style are different than what we viewed here in the States from 1984-1987, but there are still many aspects that are continued from the original Sunbow-produced episodes. While I completely acknowledge how much heart and wisdom can be found in the "Masterforce" series, I might have to say that "Headmasters" is a guilty favorite. Being the old school G1 fan, it's hard to beat the thrill of seeing those bots in new stories, I love the free-wheeling action of the series, when you can have combiners in battle without them even being a focus of the episodes, something which really began in the season three. There is a wealth of planet-hopping plots, also as seen in season three, a large cast of characters, great voice talents and some surprising losses displayed. I can somewhat understand the changes seen in Kup, Arcee and Magnus being sidelined as each subsequent season of the Transformers had this same thing happen (Season One bots sidelined for Season Two bots, who were in turn benched for the movie-era bots in Season Three, etc). And as will be detailed in subsequent reviews, there is much to enjoy about the backstory of the Headmasters as presented in "4 Million Year Old Veil", in terms of leaving Cybertron, crashing on Planet Master, the hardships and turmoil encountered and finally building bigger bodies for alt forms. Until next time!

Glad to see a review on one of the Japanese TF series!