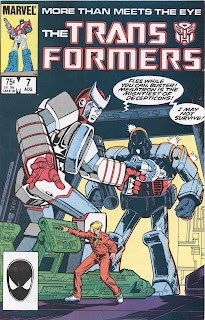 Warrior School! is the seventh issue of the US Marvel Transformers comic series. Bob Budiansky provides the script, with pencils by William Johnson, Inks by Kyle Baker, colors by Nel Yomtov and letters by Rick Parker. The cover is another Mark Bright piece.

Unfortunately, this cover is far weaker than his other cover, the iconic cover to Transformers #5. Ratchet faces off against Megatron. Ratchet wields a pretty big gun, though he's addressing Buster instead of the threat before him. "Flee while you can, Buster! Megatron is the mightiest of Decepticons! I may not survive!" he warns. Buster is, indeed, on the cover, apparently running away from Megatron. Megatron himself is fairly menacing, his face shrouded in shadows and some backlight effects on his head and shoulders. Still, any cover that feels the need to literally spell out what it's trying to convey loses points right there. Also, while Ratchet WILL fight Megatron in this issue, Buster will be nowhere nearby. It's a minor point perhaps but I don't like covers to cheat this way. Unfortunately, the weak cover presaged a weak issue.

The opening splashpage titles this issue WARRIOR SCHOOL!, but gives us very little of interest. Four college kids are camping when a tree starts to topple into their midst, an event that seems far less threatening than most of what we witnessed last issue. We spend the next five pages watching Ratchet and Buster bond with the kids, out to take a break from their studies. Ratchet and Buster seem cheerful and happy, a stark contrast to how we left them at the end of #6. Bob retells the Transformers origin in these pages, which was editorially mandated but nevertheless quite clumsy. The college kids taking a break from their studies ties in thematically with the concept of a warrior school only loosely. Overall, it feels like six wasted pages. Only a brief seizure of Buster's advances the plot at all. Even that is awkward, referencing a beam from Optimus to Buster, when in fact #5 showed us wires connecting the two. At the end, the college kids agree to take Buster home, leaving Ratchet to go save the Autobots.

Cutting to an advanced factory of G.B. Blackrock's, thinks perk up a bit. Soundwave infiltrates the plant by hiding out as a tapedeck in the parking lot, allowing a worker to carry him past the formidable defences that Blackrock has installed. It seems that our new favorite industrialist is still smarting from the loss of his oil platform and determined to prevent a similar occurance. Once inside the plant, Soundwave and Laserbeak easily defeat it from within, while broadcasting images of their conquest to the world. Shockwave gives Soundwave some measured praise for his sucess, while Soundwave gushes effusively back to his commander. It seems out of character now, but of course Bob wrote Soundwave's tech spec, which this is rather true to. It will take some time for cartoon sensibilities to bleed into the comic.

Blackrock doesn't take the loss of his plant well. He vows never again, then goes to visit poor partially-paralized Josie Beller. She's in her hospital bed, but still working away. He tells her not to work too hard while workmen are in the room delivering some advanced equipment, but then breaks down when they're alone. It's not just the factory, it's also her condition. One gets the sense that their relationship goes deeper than employee/employer, given how candid he is with her. As he leaves, he promises her that the robots will be stopped. Ominously, in her mind she promises the same thing right back.

Ratchet sneaks through the Ark, at a loss as to what to do. He replicate's Buster's journey from #5, finding first the hanging slabs that are the Autobots, and then Prime's disembodied head. Even as just a head, Prime is a commanding presence. He tells Ratcht that now is the time for Valor, and that Earth will be his training ground. It's dramatic, but seems like transparently bad advice. One Autobot against all of the Decepticons? How is Prime doing anything other than sending Ratchet to a pointless death. It seems like better advice would be to run away with a couple of stealthy/tough Autobots, patch them up, repeat. Ah, well. 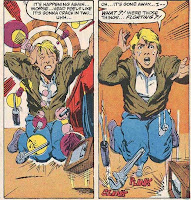 At Sparkplug's garage, Buster is worried about what an extended period in the hospital will mean for his dad's business. He blows up at his well meaning friends, then has another intense headache. This time, though, it looks like he may be levitating tools. What did Prime do to him?

Finally, inside the Ark, the confrontation promised by the cover. Ratchet is looking for Megatron, which is handy since Megatron is the lone Decepticon guardian of the Ark. Even Ratchet can't quite believe he's doing it, a rhetorical trick to assure the reader that yes, this is indeed somewhat hard to swallow. Unsurprisingly, Megatron mops the floor with our poor medical officer. Bob does well with the external vs internal dialogue here; Megatron is all arrogance and superiority, while Ratchet attempts to summon up some combat bluster even as he bemoans his chances internally.

The fight is interrupted by Shockwave, though. Shockwave demands Megatron prepare Prime's head for transport, prompting the deposed despot to smash the monitor (after it's turned off, naturally.) Ratchet realizes that his chance is here, and offers to defeat (unfortunately mislettered 'defend') Shockwave for Megatron. We get yet another page and a half of expostion, improbably, from Megatron. This time it's about Shockwave and the Dinobots. Ratchet and Megatron seal the deal with the Ritual of Oneness, pouring their fuel together and burning it. The final panel features Ratchet literally crying while Megatron cackles about how he can't lose in this deal. Next issue: in search of DINOBOTS!, we're promised.

While Johnson's pencils get the job done, there are few stand-out panels. Parker's lettering continues to impress - I rather like the way he lines up his letters with Laserbeak's blast in a long panel. Yomtov has a good issue. Soundwave is nice and blue, like his toy and his character model, and his special effects for buster's seizures help convey that this is no mere health condition.


Overall, not a great effort. The jovial tone of the first six pages undercut the tension that's been mounting since issue #4. The Decepticon intrigue continues to be interesting, and the GB/Josie angle plays well. Buster's new telekenisis is also a fun new development. 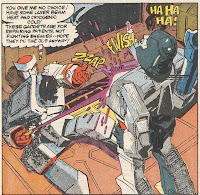 Inprobably, this issue introduces the readership to the dynamic of Ratchet vs Megatron, which would play out a total of three times throughout the Marvel comic run. In fact, their three direct physical confrontations (#7, #8 and #59) rival the number of times Prime fought Megatron one on one (#2, #25 in a video game, #48 in flashback and #70, sort of ). It's one of those fun accidents that help make the Marvel continuity so much fun.

I really enjoyed Johnson and Baker's art in this issue. I particularly like the way they draw the joints on characters like Ratchet and Megatron; you can see the gears and inner workings and it really goes a long way towards making them look convincingly like machines.

I can't believe they made Soundwave BLUE in this issue! Everybody knows that Marvel Comics Soundwave is PURPLE!

I'm not entirely clear on what you mean by the "three" times the Ratchet/Megatron dynamic plays out over the run of the comic, given the same number (three) being the number of physical confrontations.

The number of physical confrontations between the two is correct enough, but I feel the need to add the Ratchet/Megatron fusion and it's aftermath in issue #78. While neither are a "direct physical confrontation," they are clearly part of the Ratchet/Megatron saga, and part of why I love comics Ratchet so much (curse Hasbro for not giving Universe 2.0 Ratchet a red head!).

Of course, you may be counting these (the physical confrontations of #7 and #8 could arguably be part of the same story). It's just the doubling up of the number three that's throwing me.

William Johnson was arguably the best Transformers artist Marvel had to offer (interior art, not covers- and if your talking books I'd say Earl Norem hands down). Number eight was in fact my first issue, and man was it great.

I was always disappointed that he didn't stay on to draw more issues, but it was probably just another toy book for him.

Looks like I'm in the minority here on the art. That's what I like, though, civil debate. Zob and Caleb, you both raise good points about Johnson's art. I find myself compelled to go back and reread it to see what I've missed.

#8 was my first issue, too. I'm eager looking forward to it's review next week.

I'll admit I thought the cover art wasn't that exciting either, as for the story- just call me superficial, I loved the art LOL.

I thought it was interesting enough since I never really gave it much thought until now, but the interest was not unlike a child seeing something shiny & new (since I was pretty young when I first read it)- I think I'm probably too close to it to be really impartial. Ah, sweet nostalgia.

Too bad he never drew another TF issue after issue 8 or atleast covers. :(

(He left Marvel because he had trouble keeping up with deadlines, hence why last few pages of issue 8 were rushed)

i have those issues, and it´s all very memorable to me :)