I was very excited when I heard that there was going to be a new Cyclonus toy. He's probably my very favorite Transformers character of all time, and he's one of the few important G1 characters who hasn't been redone for the modern era (his name has been recycled, but that's certainly not the same thing), so he was long overdue for a new toy. I've garnered a reputation of being picky and demanding when it comes to Transformers toys--but worse than that, I'm mercilessly discerning when it comes to favorite characters of mine. A new Cyclonus toy could never hope to live up to my impossibly high standards, right? Read on! 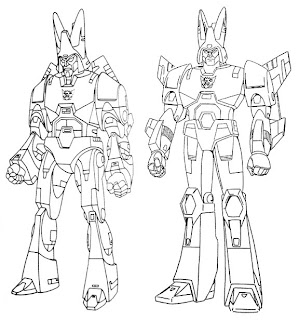 The origin of Cyclonus has a long and sordid history. Typically, the animation models for Transformers characters are essentially simplified versions of the Hasbro toys. The characters created for The Transformers: the Movie were realized as animated characters first (with the exception of Ultra Magnus, who already existed as a Diaclone toy). Concept artist Floro Dery, who created Cyclonus, said that he made the character transformations realistic enough that toys could be produced in the likeness of the characters. Unfortunately, the design for Cyclonus that Hasbro used as the basis for the 1986 toy was an early version of the character, not the finished design that actually appears in animation. The original Cyclonus toy had rounded musculature on his arms and legs, and wings that folded inwards, which was accurate to Floro Dery's vision of the character but was notably different from the character featured in the movie, who had a more traditional geometric design and wings that jutted outwards in robot mode. (Cyclonus did appear in his early incarnation in a handful of episodes like "Starscream's Ghost" and "The Rebirth," the apparent result of animators using the earlier, discarded model.)

The original Cyclonus toy also had a number of unfortunate design elements that I always found disappointing. His wings were designed to detach for safety reasons, but I found it tremendously upsetting as a kid when I transformed the toy for the first time and his arms came off in my hands. Also, Cyclonus' robot face was clearly visible on the undercarriage of his jet mode, when in the cartoon it was conveniently covered. Finally, the hands on the original Cyclonus toy were laughable block-shaped stumps, gigantic sections of the fuselage with a faux fist design molded into one side. I sincerely hoped that Hasbro would manage to overcome these glaring issues with their new version of Cyclonus.

The new Cyclonus is about six inches long in jet mode (the packaging calls him a "hypersonic starfighter"), nearly two inches smaller than the G1 toy. Something that I found kind of off-putting about the new toy is that it's not nearly as streamlined in this form. The original Cyclonus was a sleek, aerodynamic vehicle that you could just imagine cutting through the atmosphere at lightning speeds, but the new edition is comparatively chunky and looks like it would encounter plenty of wind resistance. The obvious robot legs nestled into the back end of his jet mode are particularly bothersome to me, since they really break up the lines of the vehicular form. Still, he's generally the right shape and profile, with swept-forward wings and a sunken cockpit, and he even has an antenna-like protrusion in the center of his nosecone, a design element present on the G1 animation model that wasn't included on the G1 toy. His purple coloring almost seems too dark, and could pass for black in poor lighting, but it's a reasonable attempt at emulating the look of the original toy (he was a much lighter shade of purple in animation). 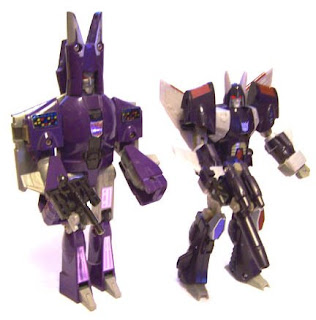 His transformation is radically different from the first toy, but not in a bad way. Lots of little tricks were incorporated into his design to try to get him to match up as closely as possible to his original animation design. This time, instead of the nosecone simply folding up and hanging off the back of his head, it telescopes into itself and then folds into the cockpit to disappear completely. His head rotates so that his face is not visible from underneath in jet mode. His arms are actually mounted on sections that swing forward to complete his upper chest. His wings retain the correct orientation this time so that they still jut outwards in robot mode. His lower legs are actually split in half, and are wrapped around his upper legs until each section is swung down and connected together. The end result is a robot form that retains all the essential design elements and has absolutely no kibble hanging anywhere from the toy, an impressive engineering feat indeed.

In robot mode, Cyclonus has about 15 points of articulation, and stands at just under six and a half inches tall. The design inspiration of his original cartoon model is unmistakable, and the new toy includes details like his hexagonal-shaped kneecaps that were missing from the 1986 toy. The spires on his helmet actually jut outwards at an angle, and are made of soft vinyl plastic as per current safety guidelines. A lightpipe feature allows Cyclonus' eyes to glow bright red when you hold him up to a light source. All of the design flaws present on the old Cyclonus toy were addressed with the new edition to my complete satisfaction. This is, hands down, one of the most impressive updates to a G1 character ever devised! 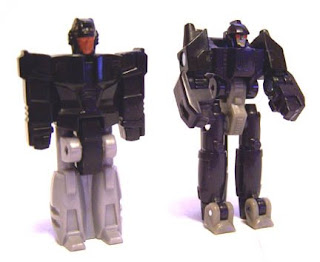 Cyclonus is also paired with Nightstick, a Nebulon who partnered with him to become his weapon during the course of "The Rebirth." The 1987 version of Cyclonus was retooled to accomodate a Targetmaster accessory, and a similar approach was taken here, with a weapon mount located on the top of the jet form. Curiously, only one of Cyclonus' fists can accomodate a weapon; his left fist lacks a peg hole to hold his gun in his other hand. The new version of Nightstick is a vast improvement over the original one; while the original Targetmaster accessory had one moving piece to its name (fold the legs over to form the gun), the new Nightstick has a multitude of moving parts, including articulated shoulders and elbows, and yet he retains the same basic weapon design. One detail that I really like is that his weapon barrels are actually hollow; so many Transformer guns terminate in featureless stumps, so it's refreshing to see a gun that looks like it could actually fire something from the barrel. Also, Nightstick is held together with numerous bolts, ensuring that he won't fall apart. During the Transformers: Armada era, I grew so accustomed to Mini-Cons that routinely fell apart (sometimes just by transforming them), so it's nice to see Hasbro forking out a little something extra to ensure the toy will hold up to actually being played with!

If I have any complaints about this toy, they're comparatively small. The sections to which his arms are attached are colored grey when they should probably be purple; the multiple colors are distracting and break up the lines of his upper body. Also, while Cyclonus had orange-colored highlights for his canopy and robot mode details, the new version uses a red canopy (the same color of translucent plastic as his eyes) and sort of a muddy brown color for the paint deco, which isn't quite as attractive to my eyes. Still, these are minor considerations. Overall, I think I can confidently predict this will be one of my all-time favorite toys of 2009.
Posted by Zobovor at 8:55 AM

Great review. Makes me want to go out and buy the toy, and I don't even collect the classics line.

I just picked him up over the weekend along with Cheetor and Hound. With out a doubt the best of the three.

I agree with your points on the his color scheme, but honestly prefer it to his Henkei counterpart. I'm convinced TomyTakara can't produce a decent purple. :-)

If you're truly a fan of the G1 Cyclonus design, I suggest you also pick up the Jizai Toys custom. There's apicture of it in this thread:
http://www.toysdaily.com/discuz/viewthread.php?tid=81261&page=1#pid2796483

I picked it up relatively cheap on E-bay (painted in metallic colors), and it lookes completely show acurate. I love their design.

I agree that TakaraTomy keeps using purple that's too light (both on their re-issue Galvatron as well as Henkei Cyclonus), but it is at least slightly more cartoon acurate than the Universe one, which seems to have the colorscheme from a Cyclonus prtotype that was displayed in the 1986 UK catalogue. Although the prototype also had a silver head and pink face, if memory serves.

Also two design elements that weren't mentioned but are very neat: his abdomen forms the airvent in plane mode that is seen covering his face in the movie. And there's also a way to attach Nightstick directly to Cyclonus' arm, without using his hands. This was the way the Targetmasters attached to their partner robots in the Headmaster cartoon :)