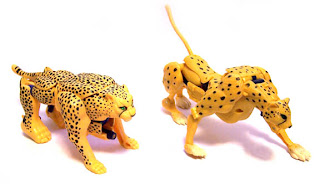 If the goal with Transformers Universe was to create improvements over the original toys, then the clear focus on Cheetor was his beast mode. Admittedly, it's a significant improvement over the original toy from 1996. Compared to the updated version, which is lean and lanky and clearly based on a real-life cheetah, the original Cheetor is a malformed, vaguely cat-shaped blob. Where the old Cheetor made numerous concessions that were necessary because of his design and transformation (gigantic hind paws because they served double-duty as his robot feet; a fair amount of undercarriage robot kibble), the new edition solves these problems rather nicely. All his paws are proportionate to each other, and he's got almost no visible robot-mode parts in beast mode. He's also got honest-to-gosh articulation in beast mode this time, with 14 moving leg joints. He's not very stable, however, and the panels that make up his hind quarters tend to untransform themselves when I try to pose his rear legs.

Cheetor was also designed with a new gimmick that's integrated into both modes. When you press a lever on his back, he opens his jaws and bares his fangs. His eyes also change color when he does this, from green to red, through the same sort of technique employed with Animated Swindle's gyro gun (there are differently-painted spots behind his eye sockets). This is a neat little homage to the fact that the original Cheetor toy went through several different eye colors; the red-eyed version was eventually replaced by the green-eyed version in stores. (There was also a blue-eyed version, the first Cheetor variation released.) Unfortunately, some of the worst Beast Wars toys were built around a gimmick like this (I'm thinking mainly of Bonecrusher the bison and Depth Charge), and Cheetor's robot mode does suffer as a result.

On the surface, Cheetor's transformation is similar to numerous quadroped-to-robot designs in which the front limbs become the robot arms and the back limbs turn into robot legs, but there's a lot of complexity behind it. I'm reminded a little of the Animorphs Jake/Tiger toy, due to the numerous folding panels that serve to hide the robot parts. The entire cheetah head-and-chest assembly is one piece (due to the gimmick) so the robot mode essentially folds up around it, with his robot arms hidden partly inside the cheetah's front legs and his robot head tucked away behind a panel on the top of the cheetah's neck. (I find the robot head to be somewhat problematic; I'm usually pretty good with using my fingernails, but the only way I can get his head out is to pry it open with a screwdriver or something). There is a clever design feature here, as his head includes a spring-loaded panel that opens up to cover up the chamber where his head rests inside when he's transformed. 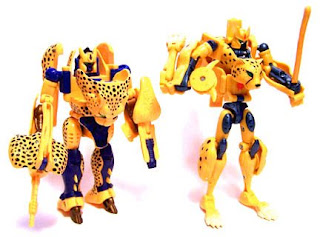 The promotional pictures of Cheetor on Hasbro's web site (the same pictures on his packaging and in his instruction booklet, incidentally) were, mercifully, badly mistransformed. The correct configuration for Cheetor is much better looking. In robot mode, Cheetor's six inches tall and has about 15 points of articulation, including working ankles (his robot feet are just the cheetah feet in a slightly different configuration) in addition to all the same moving joints of the original toy (minus a swiveling waist). He's recognizable as Cheetor, with plenty of metallic blue in this mode, but he's a lot more oddly-proportioned, with spindly legs, an extra-skinny waist, and perhaps most regrettably, a gigantic cheetah ribcage protruding from his back. The front cheetah legs also fold up and end up mounted to his forearms like gigantic armor panels (like the original Rhinox toy), but they're so large that they actually interfere with the movement of his arms (he is not able to rest his arms at his sides).The thing that bugs me the most about his robot mode, though, is his head sculpt. Somebody decided it would be a good idea to give him an actual cat face, complete with a divided upper lip. Now, Cheetor did have some cat-like elements on his face in the TV show, like freckles and lines under his eyes meant to emulate cheetah markings, but it looks really bad on the toy. Something closer to his original head sculpt would have been vastly preferrable in this case.

Cheetor's traded in his quasar cannon for some new gear. (Cheetor's gone through so many different incarnations that the character cannot really be said to have a signature weapon. Throughout the course of his career he's carried guns, whips, and swords.) This time, his tail is detachable and can be used as a club; he's also armed with two three-pronged bladed discs (the blades are retractable and are stored in his rear haunches when he's not using them). Weapons storage was an essential part of the Beast Wars design philosophy, back in the day, so I'm pleased to see this was retained.

I think the problem here is that Cheetor just wasn't a badly-flawed toy to begin with, so I question whether he really warranted a remake. There are plenty of other Beast Wars characters who I think could have benefited far more from a new toy. Can you imagine a shapely, feminine Blackarachnia toy that actually looked like her first-season incarnation instead of being just a Tarantulas redeco? Or how about a new version of Terrorsaur that looked more like a pteranodon and less like a hangglider with claws stuck on its wings? In any event, while the new version of Cheetor has a much better beast mode, his robot mode suffers so much that it's almost not worth the trade-off. I can appreciate what the designers were trying to do, and it was an ambitious attempt, but it loses something in the actual execution.

Agreed on other toys that could have used the "aniversary" treatment more. I'm thinking Scorponok, Rhinox and Airrazor right off the bat. I wish they'd gone for Tigatron instead because he should be bigger (here's hoping they do more than repaint Cheetor with him).

And get on my Tankor and BM Silverbolt reconstruction. Now there are toys that scream redo.