One of the things that I've come across in my model-hunting are show and comic bibles. These include extended bios for some characters, longer than the tech specs. The good folks at Marvel turned some of them into the Transformers Universe books, by coloring in the character model and including the extended text. Unfortunately, some characters didn't have character models and subsequently got left out of the book.

I bring you the extended bio for Roadbuster, ground assault commander and prominent member of Kup's crew in All Hail Megatron: 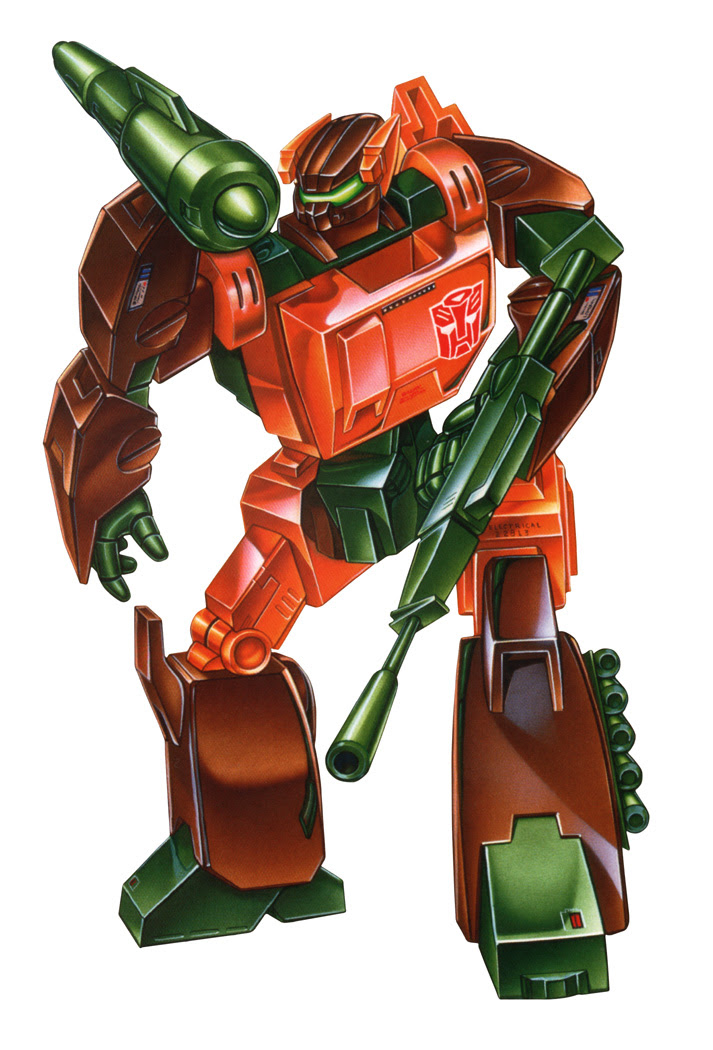 Profile: "Demolishing Decepticons / is the way Roadbuster prefers to pass the time. If he's not fighting, he's just not happy. This isn't because he's particularly hot-tempered -- he just bores easily. When not in battle he's usually the most quiet of all the Autobots. But give him an enemy and he reverts to rough no-nonsense form and attacks with a zest unsurpassed by any of his comrades. It is in combat situations that his charisma surfaces, inspiring his fellow warriors and making him a natural leader. "With Roadbuster leading us, no one worries about consequences," says Tracks. "We just want to scrap some steel!"

Abilities: In jeep mode, Roadbuster can cross all but the most extreme terrains. He can traverse swamps, rocky hillsides, ice and mud without any problems. He has a range of 600 miles. He carries a turret-mounted linear blaster gun which can blow a hole through two feet of concrete. In robot mode he has a laser rifle as well as a shoulder-mounted shrapnel-missile launcher.

Weaknesses: As a result of his tendency to tune out non-combat situations, Roadbuster is sometimes unaware of impending danger. It is only when he is directly confronted by it that he will react, and by then he is often in more trouble than he can handle.

Thanks Jim Roadbusters one of my Favorite G1 toys to bad he did not get more screen time in the show or comics.
But this bio is a big plus. Now all we need is to find Whirls bio

I'll see if I can track Whirl down. I'm pretty sure I don't have it, unfortunately, but I know who might.

Am I correct in understanding that the "extended" biographies were actually written first, and that they were abridged for the toy tech specs?

Do you know if there are full-length profiles for the Deluxe Insecticons, too?

Hey, Jim, would you ming reposting the Omnibot bios here too? The Allspark threads you posted them are noy only available via the Wayback Machine, which isn't exactly known for being able to keep track of it's data.