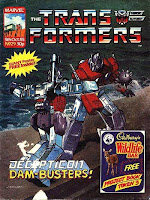 First, a note on continuity: This story picks up directly from the end of Marvel US #8, the latter half of which became Marvel UK #28. This was the first time that a UK originated story fit squarely in with the continuity of the slower US book. It is possible to go back to “Man of Iron!”, “The Enemy Within!” and “Raiders of the Last Ark!” and place them as having happened somewhere within the initial four-issue mini-series, but its an exercise in futility to try to make them have any meaningful part in the mythos. To break up a reading of US #1-4 with these throwaway UK stories would be disjointed and ruin both sagas. From UK #29 onwards, however, the UK material, for the most part, only adds to the enjoyment of the US book, and Simon Furman generally does an excellent job of keeping the continuity straight.

“Decepticon Dam-Busters” was written by Simon Furman, illustrated by John Stokes, coloured by Steve Whitaker, lettered by Richard Starkings and edited by Ian Rimmer. The cover was by John Ridgway of “Man of Iron!” fame.

Ridgway’s cover is an excellent piece that I am going to have trouble reviewing. A mean and moody looking Optimus Prime and Megatron duel with medieval weaponry atop a dam. It appears that we’re finally starting to see the animation models in use for the UK comic, as both characters look more as we would expect them to, although Prime’s faceplate still remains as it has in every UK story thus far, resolutely blue, rather than the more famililar grey. Unfortunately, the version of this cover that I am reviewing is badly worn, and I can’t see all the detail I would like to. I get the impression that it was not originally as dark as this scan suggests but I could be wrong there. I am, however, pleased that for the first time since “Man of Iron!” we are provided with a cover that wasn’t simply pinched from the interior art, and by a different artist, no less. I feel blessed. Ridgway has interpreted Prime’s axe and Megatron’s morning-star as physical weapons, rather than made of energy - as they are in the other versions of this encounter, but I feel that that adds, rather than detracts from the drama of the duel. Unfortunately it is rather marred by a long out of date panel where a free Cadbury’s wildlife bar was affixed. The cute deer is decidedly out of place. The overall cover design has changed as well. The previous UK cover images were squashed beneath black bars containing the title of the comic. This is now better integrated into the image as a whole, and there’s a little picture of Optimus Prime in truck mode above the issue number and date. So there we are, I think its probably a great cover, but I would love to look at a better version. If anyone has one, I’d be grateful if you dropped me a line.

After all that about continuity, I’m going to have to take a step back here. While the story fits in as I said, it is hardly essential reading for a US fan, as it consists of a story told to the Dinobots as Ratchet moves from from place to place, after meeting them in the previous issue. The actual meat of the story, the battle for Sherman Dam, would, once again, have to have taken place at some point during the miniseries, so its an improvement, but we’re not quite there yet.

The story begins with a human encountering a rather docile Grimlock after dismissing news footage of the Dinobots fighting Megatron as a hoax. The man is understandably terrified but Grimlock is merely curious. There’s some fun banter as the Dinobots discuss their disappointment in the dominant species of Earth. Sludge says that he wonders what happened to the dinosaurs, because they were much better. Ratchet arrives and the man thinks he is saved, then freaks out as the ambulance transforms and tries to apologise to him. Sighing, “oh dear,” Ratchet think its time he had a word with the Dinobots. He tells them to keep a low profile among the humans, because they are scared of them. The Dinobots are confused by this. Swoop can understand them being frightened of Decepticons, but the Autobots are on the side of the humans. Ratchet says that humans find it difficult to tell the difference and begins to tell a story to illustrate this for the Dinobots.

Ratchet’s account is of a struggle between the Autobots and Decepticons over a source of electrical power known as Sherman Dam. The Decepticons plan to send a tidal wave rushing through the hydro-electric power plant that the dam houses and refine fuel from the resulting massive power surge. This will destroy the dam in the process and flood a human town, but of course, the Decepticons do not care about that. Rumble descend to the river-bed to shake things up and start the wave, while the other Decepticons attack the power station. The Autobots arrive to save the day, but things look bleak. Hound goes after Rumble, the other Autobots take on the Decepticons at the power station and Prime meets Megatron on the dam itself, for a duel to the finish. Optimus Prime holds his own for a while, until Rumble bests Hound, knocking him clean out of the water with his pile drivers. Distracted - Prime fails to block a strike from Megatron that sends him plunging from the dam. “Who’s scrap now?!” crows Megatron as the caption promises a “WAVE OF DESTRUCTION!” Things are not looking good.

I like this script quite a lot, although it is very obvious filler. Not only is it a flashback episode designed to get characters from one place they have to be, (because of the US issues) to another place they have to be (because of future US issues) but it is also ripped-off wholesale from another Transformers story that was already fully a year old at the date of publication. The battle for Sherman Dam is, of course, taken from the second ever episode of the Transformers cartoon by Sunbow, “More Than Meets The Eye Part 2”.

Furman adds to it a bit, of course, because a comic, especially a comic from 1985, requires considerably more dialogue than a cartoon show. I like seeing Megatron in full megalomaniac tyrant mode, calling Rumble his “Perfect pile driving powerhouse”, and speechifying to the powerless humans about his nefarious plans. Prime is on top form as well, you can practically hear Peter Cullen as he says “Lets stop this maniac!” which is excellent, because that isn’t actually a line from the show. When Prime and Megatron meet on top of that dam, its brilliant. We get three panels of Megatron replacing his hand with an energy flail as the two square off. I prefer the dialogue from the show a little better - its the usual fight banter in both versions, but the show has Megatron ranting: “Everything I touch is food for my hunger! My hunger for POWER!” which is so deliciously over the top that Furman should have written it. The fight ends in the same way in both versions as well, with Prime being knocked off the dam, just after telling Megatron “You’re old...fit for the scrapheap!” Both versions play this as something of a cliffhanger as well, although I question this, yes Prime was technically defeated, but look at him, he’s huge and metal, a brief swim won’t do him any harm, although Megatron still seems pleased.

The present day portion of the comic is efficient enough, and I like the Dinobots as characters, although Grimlock has not yet obtained his speech impediment. We will have to wait until the next part to see why Ratchet thinks that telling this story is relevant, but that is hardly the point, as the dam battle is the real story here. 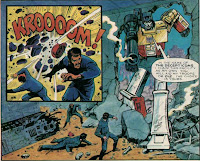 The art in this issue is superlative. Stokes does a terrific job and there is a nice mix of toy and cartoon influence on display. The Dinobots appear to be directly from their toys and the first appearance of Grimlock could have walked right off my shelf, but Ratchet has his cartoon or US comic appearance and to my mind, hasn’t looked this good before. Megatron has lost some of the weird proportions associated with his toy and is essentially a recoloured version of his cartoon model. He looks amazing bursting through the wall of the power station. The rendering of everyone’s favourite Optimus Prime/Megatron face off could have used a splash page or two, but space was understandably limited, even now the page count is back up to eleven. At least the use of the animation models allows the artist to give us some dynamic fight poses. Stokes also renders excellent humans, which could easily be forgotten amongst all the robots, although of course your average comic artists draws more humans than he does robots (just). Whitaker’s colours are kind of dark, I don’t think I like them quite as much as I like Hart’s, but his style works very well with Stokes’ detailed inking and creates a very impressive overall effect. For the first time since “Man of Iron!”, every page is in colour, and its about damn time! 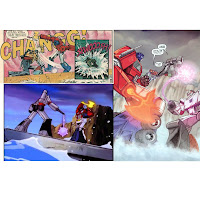 So that’s it, this issue is basically just a fight, and a fight we’ve seen before, but I love it regardless. That’s three continuities this battle has shown up in, the G1 cartoon, the G1 comic, and the later Dreamwave comic, “The War Within.” It seems to be a touchstone of Transformers lore and certainly the two leaders facing off with their own distinct weapon has a certain iconic, Luke Skywalker versus Darth Vader aesthetic about it. So, completely throwaway, even though it is in continuity, but I’m still glad they did it. 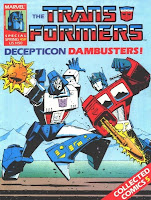 "although Prime’s faceplate still remains resolutely blue, like his toy"

The toy has a gray face plate:
http://www.youtube.com/watch?v=qAM_jiQF2DU

Yeah - I've got no argument with that. I vaguely remembered that the damaged one I had as a kid had a blue faceplate, but since I can't find a single example on the net with one, I guess I got it wrong. I'd probably just noticed that his head was, in general, more blue than the cartoon version and misremembered it. I'll edit that bit out.

One of these days I'll have to read all the UK issues. Some of them, like Man Of Iron were extremely good, it's just too bad more of these stories didn't make it in the American comic.

I'm a huge fan. These days, it's relatively easy to read most of them. Just about all of them have been reprinted by Titan books and IDW Publishing. Space Pirates, Target: 2006, Fallen Angel and The Legacy of Unicron are all very strong books, well worth checking out.

Yeah, I would go as far as to say that if you think "Man of Iron!" is extremely good, you'd be blown away by the more epic story arcs. Its unfortunate however that this early stuff I'm reviewing hasn't been reprinted, its certainly worth reading.