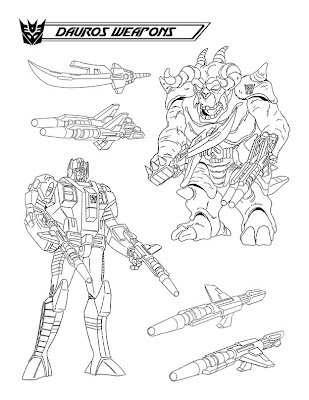 After a few weeks off for the holidays I bring you The Ark Addendum: Dauros Weaponry!

I had access to a ton of material for Masterforce, at least as it pertains to Headmasters and Pretenders, well too much to squeeze into 208 pages. One thing that got cut was the extended weapon models. Most models were done up both holding their weapons and not. Ultimately, we opted to give most of the pretenders and headmasters two, instead of four, pages. This meant that the models of them holding their guns had to go, and the guns themselves got shrunk down to go on the main character pages.

Here is a taste of what might have been if we'd had 256 pages to play with instead of 208. There's plenty more where this came from, too! Let me know which weapons you're most interested in seeing and I'll try to get to them sooner rather than later.

More great stuff. The Ark books are fantastic. Dauros is easily my favorite design from Masterforce.

Skullgrin is the only first-year Pretender I actually own, so that makes him more interesting to me than the other Pretenders. Well, that and the fact that he's a celebrity. The only thing cooler than a Transformer is a Transformer who's a movie star!

(I think they should have done more models showing the characters properly equipped, so we didn't end up with ridiculous animation mistakes like Blot with his magical telescoping backpack that hung over his head like a lamppost.)

Glad you guys like Dauros so much. Me, I'm a Gilmer fan.

Sorry for no gallery yesterday. I had enabled Iván to post himself, without going through me, but I think there may have been a hiccup. Hopefully it'll be all ironed out in time for next week.

So, here's a sort of HM/MF related question... do you think this is a decent place to post reviews of specific episodes from those Takara series, using the subtitled Metrodome versions for review? Now that many of us have been able finally see these series after years of only the terrible dub, it would be nice to review in context of the whole of the G1 animated universe. What do you think?

I think it's a brilliant idea, Brian. Are you volunteering?

Well, yes, the thought had occurred to me! :) There have been some fine contributions by others here and as long as you don't mind, I figured I would share my thoughts on the pros & cons of either the series as a whole or episode by episode... any preferences? :)

Drop me a line and let's discuss.

Can I volunteer to review Masterforce episodes too? :P Will you forgive my not-so-great english?

Sure. I was suggesting that Brian start with Headmasters. That'd leave you clear to start with Masterforce. You know you've got a standing invitation to post here, Carlos.

Thanks Jim, you're the man (and you have a reply back at the IDW boards too :P)