I'm a big fan of the Mosaic project, particularly the collaborative efforts of Iván “Decep” Mas http://robot1979.deviantart.com/, Carlos “Synapse” Oliveros http://hombreimaginario.deviantart.com/ and Rafael “Fargnay” Yáñez http://fargnay.deviantart.com/. Now, Iván has agreed to post some of his non-Mosaic art here on a weekly basis. Here his his offering for this week, along with his thoughts on the matter (click to enlarge): 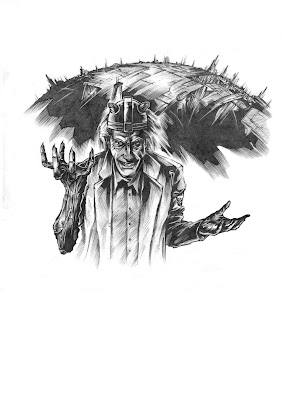 "The saga in which Arkeville appears, The Ultimate Doom, was always one of my favorites .. and, I really like the "mad doc" idea.

Over the years, I drew several pictures of the doctor, but finally I decided to draw it seriously. It is no coincidence that Cybertron appears behind him. Remember, in this saga, Megatron brings Cybertron to the orbit of the Earth, causing all kinds of natural phenomena.

Maybe some day I can continue this drawing to create a ‘movie poster’ of this saga, integrating several features that appear in those chapters along with the doctor, a little like Drew Struzan (God) on his movie posters.

Also, an idea I have had for some time; I’d like to see the most epic chapters of the cartoon series as a comic, again drawn with the same basic plot and style, but repairing the small problems that may have caused the passage of years. The series might be called ... "Transformers animated 80s: Origins " ... What do you think about it ?! It would also be a good tribute to the anniversary, an extraordinary home in comic form for the legendary chapters of the story. Maybe even interviews (with directors screenwriters etc) can be added to those issues, as what fan wouldn´t like to see it ?! Then again, I do not know if the rights issue would be a major impediment, or whether it might interest someone else, because ... the stories are already familiar. But the franchise has always reused material. [This sounds a lot like Bob Budiansky’s Transformers: Animated Movie

But it was nice that a friend remarked to see this picture - "eh! you're going for Wrightson", referring to the type of treatment that line and gave it to the drawing...please .... Wrigston is another God! but.. yeah, perhaps I remembered his style ....... a little. In any case, I recommend reading his new edition that has just appeared about Frankenstein

hey that's MY friend you're talking about!! ;)
Nice first sample of Iván's art. And thanks for putting our name's up there, man.

I always thought the Dr Arkeville arc (haha, Arc-ville?) was the high point of the 1st season, from the "Ultimate Doom" three parter and its epilogue where the evil scientist is made into a cyborg. Nice sense of serialization in a time when syndicated animated series needed to have a more episodic format for easier airing by the local affiliates. I do wonder what happened to Arkeville after that incident...

That is some great art, right there, and you're right about the episode being one of the best. Actually, one of my favourite things in Transformers is the idea of Cybertron as a metal planet and what it would look like, and your rendition there is excellent.