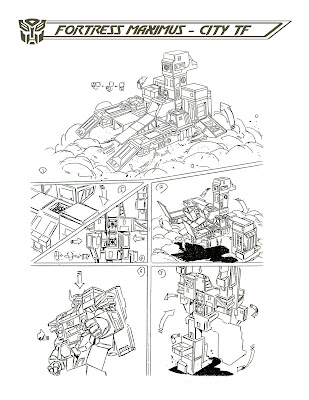 Well, here it is. Not quite a week since I launched, but I figured it was about time to post up some more models. I'm still trying to work out the best format. If you've read The Ark I and/or II, you know that the books are pretty packed. We basically used every available surface open to us to try to squeeze in extra models. Well, despite that there was quite a lot we couldn't fit.

One block of content that we did up but had to cut for space was extended transform sequences. I had very few of those in The Ark I, and most of what I had was very low quality and had to be used small. However, for volume II, I had a good two dozen or so full page transform sequences, some of which were just lovely. We ultimately had to cut this out of the book so that we could bring other content, but here (click to see the full-sized version) is a page that might have been.

Let me know how you'd like more models in the future. Would you rather have them like this, packaged as if for inclusion in an Ark volume? Or would you prefer singleton models, like the previous post with the prisoners for Chaos / patrons in Starscream's Ghost?
Posted by Jimtron at 8:51 AM

Thanks so much for sharing these, and for your hard work in obtaining them. I tried to gather TF model sheets for the a couple of years without anywhere near the success you've had. It must have been extremely difficult finding these jems, I know, I tried. I have purchased the first 2 Ark volumes and am grateful for this priceless resourse. I am a TF artist and I draw in the G1 cartoon style so having the models, especially multi-anglular heads and body shots, is particularly helpful. To answer your question, I would love to see your extras in either book format or even as part of your blog. Do you have any 1988 or later models? I would love to see anything you have.

Packaged with an Ark volume, for cryin' out loud! :D I LOVE these kinds of material, not as a drawing artist but as a writing artist on describing details. It's jems like these that makes it all the more wonderful and can help add a bit more touch of reality (well, whatever reality is in the realm of Transformers :3).

(Don't worry about books . . . I plan to keep making Transformers books as long as IDW keeps publishing them)

Mmm... I think that'd vary, depending on some of the models. If it's single stuff like those two aliens in your earlier blog, it'd make sense to be like that. If it's a sequence like Max's transformation here, or concept design changes over time, it's a bit more logical to go 8.5x11 Ark-style titleblock. Personally, I'm for the Ark-style titleblock. :)

Man check out the details on Fort here!

Hopefully you'll find the US character models for post-1987 models so you can put this stuff in a Volume 3.

Plus, I'd love to see the models for the Classic Pretender inner robots.

I'd prefer them with the Ark style titleblock.

Any chance of this stuff being included in the collection of both Ark volumes? They usually throw some extra stuff in when they collect stuff.

Thanks for taking the time and such to track these down Mr.Sorenson

Wow, I had no idea sheets like this even existed!

I think that having them like this would be best, because, in theory, I could bring it to a printshop and have it printed up on the right size pages and tuck them in to The Ark II.. I mean, granted, time and money and all that, but the idea is there. Heck, you could even print them up like that and have them bound together as an impromptu "The Ark: Appendix I" etc. Heck, maybe you could even convince one of your srtist friends to do up a cover :P

it sort of pisses me off that I bought both Ark books and now will feel the need (the need! AAAARGH xD) to get this one for the extra material (and having both books in one helps too).
Anyway. I think it's good that you place the titleblock up there. People will start downloading your stuff and uploading it on forums and all that, so it helps identify where they come from :)

Wow, a clear consensus! OK, future model postings will continue in 'The Ark Addendum' style. They can make an unofficial appendix. Maybe Iván can do up a cover, per NuclearConvoy's (awesome name) suggestion?

Fort Max, I fervently want to do an Ark III, with the 1988 - 1990 US models. To date I pretty much just have 1988, but I'll keep looking. I'm going to hold off on posting those here, on the theory that it'll make an Ark III less possible if I give away all the best stuff there.

Daniel, The Ark Omnibus will be 416 pages. Arks I and II were 208 each. That doesn't give me a lot of room for extras. However, I'll see what I can squeeze in. I can say that any extras will be things that haven't been seen on this website yet.

Sorry to piss you off, Carlos. If it helps, there won't be a ton of extras in The Ark Omnibus. Mostly I'm focused on fixing typographical errors, or swapping out bad models for better models. (My 1987 models were low quality, but a few of them I've gotten much better versions of). Keep in mind, The Ark I is out of print and going for crazy $$$ on Amazon & eBay, so this is a good way to keep it available.

I'm still a bit upset that we won't be getting a straight up reprint of the Ark, but I'm glad I'll be able to get the material at all, and the idea of a few added extras (if any) and some "corrected" art would be awesome enough to make me not care so much. But, a 400 page book makes me worry that the binding won't hold up as well. It's not going to be hardbound, is it?

Also, did that thread I started on the IDW forum begging for a reprint of the Ark have anything to do with this compendium getting Okayed?

I don't know if "piss off" is more offensive in english than "fastidiar" in spanish (supposed to be the closest translation). Sorry if it sounds like mean or something!! :P

Excellent blog. Happy to see unused model shots be put up in any way you see fit. And I do hope an Ark Volume III is possible!

I think your post probably helped. When I spoke to them back in the summer, they seemed to be on the fence. I'm glad they're moving ahead with it and look forward to correcting my earlier mistakes.

First of all I'd like to thank you guys for creating those artbooks: they're a really great reference source, especially for people who want to draw G1 Transformers.

As for the suggestion: I personally would like to see those "lost" character models that you've mentioned in the first volume of "The Ark", especially those of Elita-1 and other fembots from "The Search for Alpha Trion".

I'd love to bring them to you, Suzie-chan. So far, the fembots have eluded me. You can bet 100 energon chips that I'll keep looking though.