Blogging is the right of all sentient beings

Backing up a bit. I'm a huge fan of Transformers, and have been ever since I first saw a commercial for them back in 1984. It blew my eight year old mind. In the two plus decades since, my interest has only grown. From Simon Furman to Marty Isenberg, from Beast Wars to the 2007 motion picture, from Alpha Trion to Omega Supreme, I love the whole tapestry.

The designs in particular have always appealed to me. I stumbled across images of the character models of the G1 Decepticons back in the 90s and fell in love. The clean lines, the front and back views, the head turns . . . I found them immensly beautiful. I learned what they were and who drew them and began the slow process of tracking them down. Some of them were relatively easy. Fans like Doug Dlin had photocopies of the Japanese laser disks and were willing to share them. Guide books published in the 80s, mostly in Japan, sometimes had additional models. But I wanted more. Hasbro, unfortunately, had not archived this material. As luck would have it though, several professionals who had worked on the series, like the amazingly classy Bob Budiansky and Paul Davids, had saved much of the material they had worked with so many years before. Eventually I stockpiled a vast collection, probably the largest in the world.

In 2006, I approached Chris Ryall, editor in chief of IDW Publishing with the idea of publishing a book of character models. Being a man of refinement and taste, he of course agreed. By May of 2007, The Ark (V1) was a reality. I had to limit the scope, so I focused on the American television series, all four seasons. Sales were strong and the fan (and, gratifyingly, professional) reaction was quite positive. We moved ahead with The Ark (V2), focusing on Japanese character designs. If anything, the response was even better.

Which brings me to today. I've still got a ton of models that I have yet to find an appropriate venue for. So, what's a Transformers fan with a surfeit of material to do? I thought that a blog might be a good place to share some of the material that didn't make it into volume 1 and 2.

Here is my first offering. These models are for the alien prisoners in the G1 cartoon episode Chaos, written by the aforementioned Paul Davids. Early drafts of the script had Kup interacting with organic alien prisoners. Though the script was changed to involve robot prisoners, character models were developed for the organic prisoners. 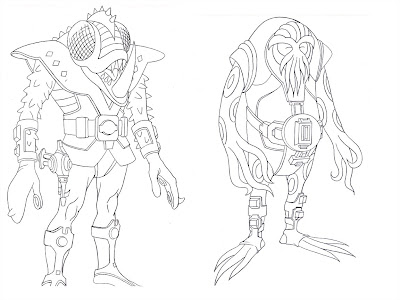 11/20/2008 addendum - Monzo over at the Transformers Wiki pointed out that these models actually did make their way into the show, in the episode Starscream's Ghost. Cheers, Monzo!

There you have it! I love feedback, so be sure to let me know if you've enjoyed these models. Watch this space for more to come. Oh, and I'm always looking for more models. If you have any that you haven't seen in on of my books or on this blog, please don't hesitate to contact me.

Glad to see you still have more models to share. This will be another blog I'll check everyday! Let's hope for an Ark vol.3 :)

Looking forward to seeing what else you've got!

Excellent idea for a blog. I am looking forward to seeing more models from you. :)

Hell yes, awesome bloggery here. I love models, you're a lucky man! Thanks for sharing the wealth. :)

Very nice indeed! I wonder though, is Floro Dery the artist/designer on these? I thought he left/was let go after work on the movie had finished...

Thanks for all of your kind words. Hans, in answer to your question, Floro Dery was no longer working with Sunbow by the time Chaos was produced, so these wouldn't be he his drawings. They weren't signed, so I'm not sure which of the designers of S3 was responsible.

Thanks for the answer Jim :)
And hey there Guido and EJ! :)
I always assumed Japanese designers from Toei or Akom (or whatever animation company was used during season 3, there were 4 companies in total I believe) would do the additional designs... any idea where these modelsheets originated from? US or Japan?

Also something nice I noticed: season 3 end credits list Danny Bulanadi as a storyboard artist on the show. I assume the storyboards must have been done at Marvel animation, because he also inked several of the Jose Delbo comics :)

And then something for box art fans: a LOT of art was produced by an artist called Jeff Mangiat. You can see his signature on the boxart posters for 1985 (on Earth) and 1986 (on Metroplex's kneecap) and on the original art for the likes of Jazz and Sideswipe (and most of the characters for which the Japanese Diaclone boxes used pictures instead of artwork).

Most of the model sheets would have originated in the US. The Japanese studios would then work to the existing models. The odds are very good that one of the people listed as model and background design produced those drawings. Pat Agnasin is listed first, so he's probably the head designer.

A thing I never fully understood is why some models from "Rebirth" were reused in "Headmasters" and others got redesigned... aesthetic choice perhaps?

It's an interesting question, Guido. I've got some thoughts but they're long and rambling, so I should save them for a future blog post.

Love the Ark books and glad you started this blog Jim.
Some of us have been contributing to another TF art archive online called "Botch's Boxart Archive". Every image is pretty much there and the archive is getting improved scans everday. Any chance there will be a collection of Boxart images at some point in time for some one to make a book out of?

Thanks and keep up the great work.

Thanks for the kind words, Jeroen. As far as Botch's excellent archive goes, I'm well aware of it. I've even contributed a few pieces over the years. I'd love to do a book of the boxart at some point. The trouble is, Hasbro doesn't have all that much of it and while Botch has an excellent website, it's not really print quality. Still, with enough time and effort all things are possible.