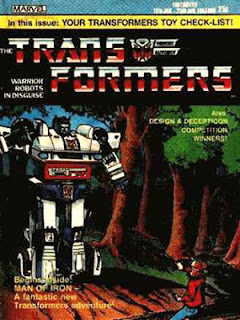 Here we have (a bit late, sorry about that) a somewhat odd interlude in the early days of the Transformers, taking place in sunny Britain, written by Steve Parkhouse, and pencilled by John Ridgeway, ladies and gentlemen: “Man of Iron.” parts 1 and 2.

Straight away I have to make an admission. Although the UK version of “Man of Iron” was reprinted in "Collected Comics 3" I do not have access to either it or the original, so I am, somewhat fraudulently, reviewing the version published for Marvel US. The script and pencils are the same, but Nel Yomtov claimed to have recolored (or at least retouched the colors) of the us version of "Man of Iron" in the letter column to US #80. Apologies for that, nothing I can do.

The cover was provided by British comic artist John Ridgeway, who also handles the pencilling for the book. It depicts a rather stiff and toy-inspired Jazz exiting some murky trees. The young protagonist of the story, Sammy, gapes in amazement as the text promises us “A fantastic new Transformers adventure.” (as well as inviting us to design a Decepticon for a competition). I have to admit to not finding this cover very inspiring, and it certainly has nothing on the previous UK comics for dynamism or even interestingly drawn robots, although Jazz is a good representation of his toy.

The story itself concerns extra-terrestrial goings on around a castle in the south of England. The trio of Decepticon seeker jets bomb this sleepy tourist spot without causing much damage. They do not transform and no-one is hurt, but one bomb remains unexploded, buried deep within the ground. The army move in to investigate. The reader is immediately wondering what the Decepticons are up to. Meanwhile, a young boy, Sammy, is playing Cowboys and Indians in the nearby woods, where he meets Jazz. Understandably terrified of the giant robot, he runs home and (off-panel) tells everyone about the robot he saw, while Jazz, in car mode, patiently waits for him. Sammy’s father, also involved with the goings on at the castle, looks in a book of local legends and finds the one of the Man of Iron. He shows Sammy an eleventh century drawing of the creature and Sammy confirms that the robot he saw was very similar.

The story, while not Earth-shattering, builds well. There is more than a hint of “Infiltration” style restraint here, with the silent Decepticons not revealing their true nature, or what their plan is. Jazz does not speak either, apart from with cryptic radio messages to his home base. Of course, having read the US issues already, the reader is thoroughly “in on the joke” and therefore true wonder at these strange characters is not achieved, but if Man of Iron was the first Transformers comic you read (which for some it undoubtedly was) you would certainly be intrigued by these beings, lurking in the shadows.

The other, more mysterious, part of the plot is of course the identity of the titular “Man of Iron”. We are treated to a two-page mythology lesson about him, narrated from Sammy’s father’s book. He apparently fought Saxon warriors in the eleventh century and appears every now and then in the area. The depiction of the Man himself is of a generic, boxy robot, with an obscured face, coloured very similarly to Jazz or perhaps Wheeljack. His identity cannot be easily ascertained, because the reader knows how easily these robots can change their forms. We assume it cannot, however, be Jazz, because he was on the Ark until very recently. A priest is able to convince him to stop fighting, so we are led to assume that he is probably an Autobot.

Parkhouse’s script is efficient without sparkling. There are no “wow” moments or particularly inspired dialogue exchanges, but it avoids the clunkiness of the preceding mini-series (admittedly, he does not have anywhere like the amount of exposition to impart), and keeps the story moving at a brisk and interesting pace. The character of Sammy is not exactly a new one, but at least he runs from the big scary robot rather than immediately befriending him. The adults are all fairly interchangeable, but we only have twelve pages here, so that is easily forgiven. The part where Sammy’s father relates the legend of the Man of Iron is particularly well done, with just enough old chronicle style language to set the tone without being confusing, and he gets the Saxon names right. One odd thing is the use of the past-tense in descriptive captions. Comics usually seem to use the present when describing action. It doesn’t hurt anything, but I certainly noticed the difference.

The pencilling by John Ridgeway is extremely good. The human characters have a good deal of detail in their faces and Jazz, while far more toy-inspired than would later become usual, has a very solid look to him, with more detail than perhaps we are used to in most of the Marvel comics. His car mode similarly is the car mode of his toy, essentially unchanged.

The Seeker jets are similarly toy-inspired, going as far as their undercarriage matching the unfortunate (but unavoidable) kibble of the figures.

My favourite section of art is that depicting the eleventh century warriors fighting each other, and then the Man of Iron. It is exciting: swords and spears bristle, horses scream, castle walls explode into fragments. Interestingly, as a student of that period of history, I don’t have many complaints. Everyone is clothed the way you would expect, swords and shields are the correct shape. There is something Norman rather than Saxon about the helmets, but, you know, in the cartoon they time-travelled to frigging Camelot, so I think this was all done rather well, considering.

The colouring is adequate, although the pencils really are very detailed, and sometimes the blocks of colour do interfere with them. I would put it at possibly a notch above the average Transformers US issue though, and certainly above the initial miniseries. Unfortunately I have no idea how different it is to the original UK issues.

Overall, a nice set-up issue, a satisfactorily interesting central mystery combined with good art. I had half a mind to complain about the old “its England so it must be castles” issue, but it was a British script written by a British writer, so it ticks all the right boxes without being a cliche. Good work. 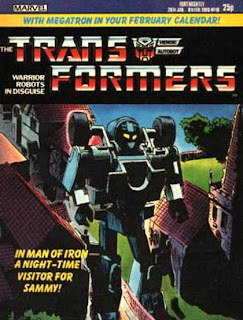 The writing and art team remain unchanged from Part 1.

A rather sinister Mirage prowls a village at night. His yellow eyes glow in the darkness and he is enormous, appearing to stand at roughly the same height as a church tower. He, like Jazz previously, is designed to follow the toy almost exactly, but he is not standing in such a rigid pose, and as such the cover is, to my mind, more successful, despite scale oddities. Text tells us of a “Night-time visitor for Sammy!” and apparently buyers of the comic could look forward to “Megatron in your February calendar.” I have no way of knowing exactly what that means, but I assume it was awesome.

Sammy sleeps, bothered by strange dreams. Or are they? We see him witnessing some nocturnal shenanigans with a huge spaceship, and Thundercracker appears to be parked in his back garden. Mirage wants to contact him about something, but Sammy doesn’t know if he’s dreaming or not, and is too frightened to be of any use. His parents are worried, especially when it appears that a hurricane blew through Sammy‘s room. The next day Sammy’s father is told by the army captain in charge of the bombsite at the castle that they have discovered an object the size of “an ocean-going liner” buried underneath the castle. Meanwhile Sammy re-encounters Jazz, now in car mode, parked in his street. It takes a little persuasion from the talking car, but eventually he gets in. His mother tells him to get out but he finds that he can’t. The issue ends with Jazz taking Sammy to parts unknown as his mother watches, helpless.

The script continues to be competent, although I did not like it as much as Part 1. Exactly what is happening in Sammy’s dream (or not) is unclear - which may have been the intent, but it appears important. The object the size of a liner is certainly intriguing. Presumably it is what the Decepticons are looking for. The dialogue that convinces Sammy to get into Jazz is... well kind of creepy. Jazz waves away (metaphorically) Sammy’s objection to accepting a lift from a stranger by saying that he’s not really a stranger, and doesn’t Sammy want an adventure, and anyway, he has something to tell him. I understand that it was always going to be a difficult scene to write, but had the words been coming from a human, it would have been a pretty icky exchange. Since Jazz then proceeds to kidnap Sammy against his will, it all seems to have gone rather wrong for the little boy and his mother. I feel more effort could have been put into Jazz gaining Sammy’s trust through more conventional means, something doesn’t quite ring true. The issue ends with a reminder not to talk to strangers - undoubtedly a good message after this. Part 2 has more conventional, present tense, captioning but I can see no in-story reason for the change.

The art is more of the same, although it is less exciting, because there is no real action and only one appearance by the Decepticons. Mirage is very detailed (and huge) and the cover image was used again for one of the internal panels.

Overall, the story continues, Sammy is clearly about to meet the Autobots, and the Decepticons must be coming to claim the mysterious buried object before long, but it is all set-up for things to come, and no further clues to the identity of the Man of Iron. Stay tuned, perhaps we’ll discover more next week.
Posted by Bishbot at 3:38 PM