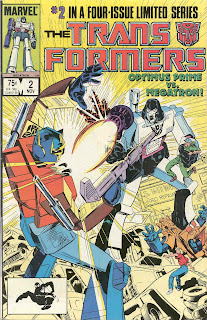 Power Play! is the second of the four issue miniseries that launched The Transformers into their longest continuous comics run to date. Bill Mantlo once again provided the plot, Jim Salicrup the script. The art lineup is mostly unchanged, with Springer pencils, DeMulder inks and Yomtov colors. Janice Chiang provided the letters, the first of many issues that she would do. Bob Budiansky provided the editorial oversight to hold it all together, appropriate as he had written the bios and many of the names for the various Transformers. The cover is by Michael Golden.

The cover is once again a high point of the issue. Megatron stands dynamically in front of the S. Witwicky Auto Repair shop, one foot planted on Bumblebee’s chest, the other on a pile of cars. He holds the struggling Sparkplug even as he unleashes a mighty blast from his fusion cannon. Optimus Prime takes the full force of the blast in the chest and is staggered by the blow. Buster runs atop a car that’s not in scale with him towards the battle, illuminated by Megatron’s salvo. Bumblebee has an exaggerated, almost comedic look of shock. “OPTIMUS PRIME VS. MEGATRON!” the words on the cover redundantly promise. The Marvel box contains a slightly off-model version of Megatron taken from page 3. While some elements of the cover don’t hold up well to close scrutiny, overall it is quite effective. It promises a clash of the titans and makes one intrigued. It is also far more literal than the prior cover, as this scene will more or less happen.

Unshackled by the need to introduce a slew of characters AND an alien race, Mantlo plots out a much more satisfying tale. The Decepticons scout out a nuclear power plant, then attack, dismantle and abscond with it. Meanwhile, a skeptical Sparkplug patches up the wounded Bumblebee. Once fixed, Bumblebee reveals himself and before long there is a tentative Autobot/Witwicky alliance. The Decepticons learn that Sparkplug intends to help adapt human fuel to Cybertronian bodies and move to intervene. The Autobots and Decepticons converge on Sparkplug’s shop, and the inevitable battle commences. Though they fight to a standstill, Starscream grabs Sparkplug and the Decepticons withdraw, leaving the Autobots perilously low on fuel. It all holds together well, with one exception. Ravage, prowling around on his own with no apparent mission, recognizes Buster’s friends and spies on them long enough to learn that the Autobots have a human ally. Wait – what? During the Decepticon attack on the drive-in, they were under the impression that the dominant lifeforms were mechanical. We’ve also had no indication that anyone saw Bumblebee leave the battle – if they had, why would they let him live? It seems a contrivance, especially since Soundwave could easily have picked up the radio transmissions between Bumblebee and The Ark.

Scalicrup, who provides the script for this episode and is given sole writing credit for #3 and #4, does an excellent job. The assault on the nuclear power plant, in particular, contains strong writing. Each Decepticon receives a bit of characterization in a way that works with the story. Starscream subtly undermines Megatron’s authority, Skywarp is eager for action, and doesn’t quite understand why humans build machines more durable than themselves, Buzzsaw revels in his artistic mastery. Also, Scalicrup doesn’t attempt to give EVERY Autobot something to do. Instead, he focuses on Prime’s command style, Bumbebee’s growing friendship with Buster, Mirage’s doubts and a few others. The fight between Optimus and Megatron has suitably over-the-top dialogue; Megatron throws a car at Prime, wondering if it will ‘halt [his] endless prattling’, causing Prime to muse, ‘Why do I persist in trying to reason with you, when the only language you understand is VIOLENCE’, hurling a engine block at Megatron on the last word. Even the inevitable exposition isn’t too clunky, as Bumblebee explains the origins of his species to his new friend Buster. Oh, and Spider-Man is promised in next month’s installment.

The art in this issue is consistent with #1, unsurprising considering that the artistic lineup is mostly unchanged. Springer seems more comfortable drawing humans than drawing robots. Sparkplug, for instance, is wonderfully expressive on page 9 as he labors to repair bumblebee. His body language as he slumps against a table in silhouette is terrifically dejected. The robots, though, are stiff and lifeless. Transformation sequences seem particularly difficult for him to make interesting. He even uses identical, awkward composition on page 6 and 18 for the transformation of two seekers from jet to robot mode. He also doesn’t quite know what to do with Prime’s trailer; it just sort of hangs out on the Witwicky’s yard during the battle. Yomtov continues to block color whenever possible, which results in an identical Ratchet and Ironhide bantering on page 13 and some other oddities, like the Hound-colored Jazz on page 13. Also, Sunstreaker has Sideswipe’s back model.

Overall, Power Play! gets it right. Robots run roughshod over humans, then have titanic conflicts in every day environments. Their special powers are starting to come into play as more than just a line of dialogue in a role-call. Autobots seek to protect humans, Decepticons seek to exploit them. There is a real sense of history between Optimus and Megatron. Optimus takes a point-blank blast of Megatron’s fusion cannon to distract Megatron from Sparkplug. The Autobot’s fuel situation seems to be rapidly becoming more and more dire. Overall, the tension rises steadily before culminating in the abduction of Sparkplug with the Autobots seemingly laid low. This chapter, much more so than #1, makes me want to read the next issue to see where the story is heading. More importantly, it makes me care about some of the characters, especially Starscream, Megatron, Optimus, Ravage and Mirage. Available from IDW Publishing in this anthology: Classic Transformers Volume 1 (Transformers)