Mommy, why are there two different sets of Headmasters models?

If you're a big fan of Transformers character models (and I think that if you're reading this blog there is a good chance that you are), you may have noticed that there is some strangeness going on around the US season 4, The Rebirth, and the Japanese Headmasters series. Namely, some of the models are used in both markets, some are completely different, and some are modified versions of each other. While it's difficult to know for sure, I have some theories as to why. 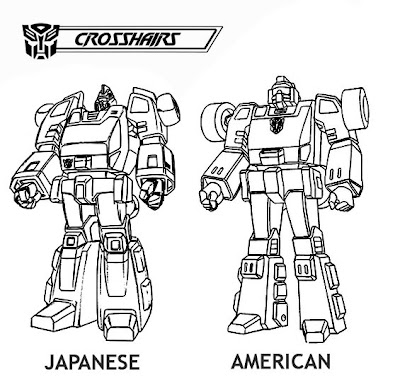 First of all, which models were the same for both markets? Identical models include The Monsterbots, the Decepticon Targetmasters, the front of the Horrorcons, and (oddly) Chromedome's car. Modified models include Mindwipe and Weirdwolf. (Note: The Ark 1 includes the Japanese models for the Decepticon Headmasters instead of the proper American ones. I didn't have the American models at the time. This will be rectified in the upcoming Complete Ark Omnibus, but more on that later.)
I have signed model sheets for the backs of the Horrorcons from an artist named ‘Miki’, who had also drawn several other models who’s Japanese design differed from the American ones. This is an important clue. It is odd to have a different artist do the front from the back, and we know Miki was a Japanese artist. The most likely explanation is that the Japanese studio received the American models for Apeface and Snapdragon but needed backs for them, and so produced them in-house.

Another clue is the models for Mindwipe and Weirdwolf. They are similar in both markets, but The Rebirth models have extra elements. Especially in the days before easy digital manipulation of images, this suggests that the American market modified the Magami Ban models produced for the Japanese markets.

The final piece of evidence is which models were the same in both markets. Note that most of the models that are the same in both markets came out in Headmasters AFTER The Rebirth aired. The Horrorcons debuted in the December 1987 episode Daniel Faces His Biggest Crisis Ever!! The Decepticon Targetmasters debuted in the February 1988 episode Miraculous Warriors, Targetmasters. Of course, the exception to this is the Monsterbots, who debuted in the July episode Rebellion on Planet Beast. Since the Monsterbots weren't in The Rebirth, though, it's unknown when their models were created. I don't have information about when their commercial first aired.

This in turn gets to the heart of the matter: timing. The Rebirth aired in November of 1987. Four Warriors Come Out Of The Sky, the first Headmasters episode, aired in July 1987. We know that the models for S1-3 were produced in America. It seems probable that The Rebirth models simply weren't far enough along to be used by the Japanese studios for early characters, so they made their own designs. This was the first bona fide new Transformers cartoon produced in Japan, and they certainly needed modelers, if only for the backgrounds and Japanese exclusive characters. (As to why Chromedome's car mode (and only his car mode) was the same in both markets, we can only speculate.)

As to why the American studio didn't just use the existent Japanese models, who can say? Perhaps it was because they already had modelers on staff, or perhaps it was due to aesthetic issues. The Japanese choosing not to import other later characters who would presumably be available, like Punch or the Clones, might also be chalked up to taste.

Interesting stuff you've dug up. However, most interesting is this "complete Ark Omnibus" you mentioned. Granted, I'd prefer to not be spending large amounts on an Omnibus where the only new stuff, for me, is the Ark 1 stuff (as I bought the Ark II, and it is excellent and I love it) because, well, I'm Canadian, my dollar currently is in the shitter, I'm a University student and the Ark and Ark II, from what i've heard, are about the same length and I already dropped money on the second one.

So, when you gonna give us the skinny on this Omnnibus?
Chock full of extras, will it be?

I'll talk more about the omnibus when I know more. Right now I don't know much beyond the pagecount. I can promise that I'll do my best to make it worth your money.

I was noting the difference in character models when finally able to watch the HM series by way of the subtitled DVD sets from Metrodome, but I don't think I've read info on the episode airdates. I did not realize that the Japanese HM series began airing before the US "Rebirth" episodes, I've always thought it was the other way around. Makes one wonder if the Japanese would have continued with their own full season of episodes even if the same had been ordered for the US series...

I wonder if it's not that unusual for a second artist to design the rear view. There are a lot of Transformers models whose behinds just don't make any sense. A number of them don't look anything like the toy, but they DO look as though somebody was taking a guess based on the front-view design.

The Technobots are probably among the worst culprits, with somebody completely misinterpreting where Afterburner's rear-mounted motorcycle wheel was or Scattershot's back-mounted jet nosecone (in both cases, somebody buried them inside the characters' shoulders). There are a bunch of second-season models like this too, though. Hoist is my favorite example, since somebody took one look at the tow winch on his back and assumed it was mounted to his arm, so his animation design's got these two pointless little flaps on the backs of his arms.

The disparity between the Japanese Headmaster models and the American ones has always bugged me. I had assumed that the guys at Takara didn't like the caricaturized look of the Autobot Headmasters because they didn't match the toys very closely, but that's just a theory. (I do think it's funny that even the American versions of the Targetmaster weapon designs don't have gun handles.)

Glad to have you here, Zobovor. Good point about the Technobots and Hoist. Oddly, the Horrorcons are something of a reversal from that trend. Their backs match up very closely with the toys, but not so well with the front of the model.

Another thing I noticed is that some designs looks like they were based on prototypes or early production drawings (I suppose) since they are very different from final product.
For example, the heads of Autobot Targetmasters are quite different from toys (while they are toy accurate in HM)
Another case is the whole Lord Zarak's body design.

That said, HM/Rebirth is not the first case of models' differences... the '86 movie shown many redesigns (with Marvel comics using the early versions)... probably in this case was just matter of aesthetic choices...

Wow glad to see your still digging for the truth Jim

When will the Ark Omnibus be released?